Security problems and violence overshadow prospects for political stability in Iraq. Sectarian violence has escalated in the absence of a national unity government in recent months. Now, with a government finally in place, Prime Minister Nouri al-Maliki’s top priority is establishing law and order and some semblance of security on Iraqi streets, where Sunni insurgents—or so-called "taqfiris"—and ragtag commandos roam unimpeded and engage in revenge killings, kidnappings, and death squads. Based on figures from Baghdad’s morgue, deaths among Iraqis have climbed to 1,000 per month, not including casualties from bombings. The prospect of a partial pullout by U.S. and British forces by the end of the year steps up pressure on the Iraqi government to consolidate its control over the country’s fledgling security forces.

What are Maliki’s plans to improve security?

Addressing his cabinet for the first time on May 21, Maliki vowed to employ "maximum force" to stamp out the insurgency and disarm the militias, but added that force alone would not end the violence. Equally important steps, he said, include improving Iraq’s economy, speeding up reconstruction, and reconciling long-standing tensions between Iraq’s Sunni and Shiite communities, whose relations worsened in the wake of a February bombing of a Shiite shrine by Sunni insurgents. "The first of order of business is taking the next step toward a grand ethnic and sectarian compromise such that Sunnis decide it’s in their interest to stop shooting people," says Stephen Biddle, a CFR senior fellow for defense policy. "Until that happens, they will have a hard time cleaning up the militias and reforming the [defense and interior] ministries." Gregory Gause, a Middle East expert at the University of Vermont, agrees on the need for a compromise of sorts between the warring factions. "Maliki will need to get some kind of political agreement among the major players to get a handle on cutting down on these revenge killings and sectarian-cleansing operations," he says. "Otherwise I don’t think in the short term he will be able to form a unified command over the security forces."

More From Our Experts
Sheila A. Smith
How Japan Is Upgrading Its Military
Stephen D. Biddle
Nonstate Warfare
Max Boot
U.S. Troop Withdrawal From Afghanistan: What Are Biden’s Options? 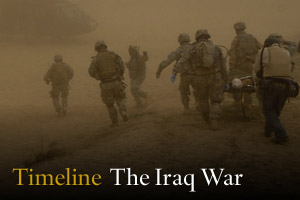 Maliki’s recent visit to Najaf to reach out to Grand Ayatollah Ali al-Sistani was a smart move, experts say. Iraq’s most senior religious leader issued a subsequent proclamation declaring only government forces could carry firearms and that all militias should be decommissioned. However, "to what extent Iraqis obey him is anyone’s guess," says Matthew Sherman, former deputy senior adviser and director of policy for Iraq’s Ministry of Interior.

Are there indicators that suggest security in Iraq is improving?

Yes. Despite the bleak news reports of escalating violence in Iraq, not all is hopeless, military experts say. "The standard narrative in the press after the Samarra bombing [in February of a holy Shiite shrine] is that things are going to hell in a hand basket," Biddle says. "But that’s not happening. The civilian casualty rate declined dramatically after that." Indeed, according to the Brookings Institution’s Iraq Index, the number of Iraqi civilian casualties spiked in March to 1,192, the highest point since last summer, but then fell to 691 the following month. Also, "immediately following the Samarra bombing the government issued a curfew, the population obeyed it, and the army enforced it," says Kalev Sepp, an assistant professor of defense analysis at the Naval Postgraduate School. "The concern was that there was going to be this fragmentation, but that did not happen in the army and the police did not collapse."

What kind of leadership will be required from Maliki to secure Iraq?

"A strong leader will have to emerge," Kepp says. "That’s the pattern for counterinsurgencies," he adds, pointing to previous examples in Colombia and Malaysia. "A strong leader may impose emergency rules, which people will be satisfied with. They will lose some promises of democracy but it means they don’t have to worry about their husband[s] being kidnapped, or they can open a store and not give half their profits to protection rackets." He adds that a strong leader does not necessarily mean one who abuses human rights. But Biddle says more important than replacing one autocrat with another is establishing a power-sharing government with sufficient checks and balances, which guarantees the legislative powers of minorities while constraining those of majorities—what political scientists call "consociationalism." "I don’t think the answer is simply to get Saddam Hussein with a new set of clothes," Biddle says.

What is the timeline for Iraqi forces to take over security duties?

Maliki has accelerated the training of troops and police in anticipation of a rumored drawdown of U.S. forces by the end of 2006 (senior U.S. military officials have said as many as 25 percent of the 135,000 U.S. troops in Iraq may leave by year’s end). Beginning next month, Maliki said Iraqi forces would be ready to take over security duties in a small handful of provinces, including the British-run—and relatively peaceful —provinces of Muthanna and Amara in southern Iraq. Further, he predicts Iraqi troops will be in control of all but two provinces—Baghdad and Anbar—by year’s end. But not everyone agrees with Maliki’s optimistic outlook. "Brave proclamations by Maliki might or might not tell us anything," Biddle says, "It’s easy to proclaim; it’s a lot harder to do." Adds Sherman: Maliki’s predictions "might be unrealistic but will be condition-based. Iraqis are trying to exhibit their independence, but if they do that prematurely it could be a bit troublesome."

How does the effectiveness of Iraq’s police compare to its army?

"It’s a mess," Biddle says, "but the army is not as white as driven snow either." The biggest problems with the police—around 135,000 officers—remain widespread corruption, infiltration of militia members, lack of discipline, and poor training. Many of its members even lack basic knowledge such as how to use a firearm or how to investigate a crime, experts say. Part of the problem, highlighted by a recent investigation by the New York Times, is the lack of attention paid to the police by Washington. That was not the case with Iraq’s army, Biddle says, which benefited from Pentagon officials working closely with Iraqi military leaders to equip and train their 115,000 forces. "The U.S. military is naturally inclined to focus on its own," adds Sherman, referring to its counterparts in Iraq. He recommends more civilian advisers to train the Iraqi police. Historically, Iraq’s police was neglected much more than its army, experts say, particularly under Saddam’s watch. "It was a welfare system," Kepp says. "People who couldn’t get jobs anywhere else got jobs at the police." Most police worked as traffic cops and only worked half shifts. "Part of the continuing problem is overcoming that inertia," he says.

How can the Iraqi government disarm the militias?

By proposing a mixture of carrots and sticks, experts say. Biddle suggests offering leaders of the nine main militias some promise of future political posts, while stressing to these leaders, including renegade Shiite cleric Moqtada al-Sadr, they will not win in a direct military conflict with the U.S.-backed Iraqi army. Sherman says that because each militia’s political makeup is different each may require a different policy. "You can try applying standards that will fit across the board but you’ll then need political agreements tailored to each group," he says. Internally, Maliki has reportedly sought to disband militias that have infiltrated Iraq’s police force by strengthening a rarely enforced anti-militia law established by the Coalition Provisional Authority. Also, by dispersing militia members among different police units throughout the country, Maliki hopes to dilute their ranks and shift their allegiances from local tribes to Baghdad. But some, including many Sunnis, say that is not enough. In an interview with the New York Times, Tariq al-Hashemi, vice president and top Sunni leader, called for a wholesale purging of the Interior Ministry to rid its ranks of corrupt and sectarian officials, which he says number in the "thousands."