This interactive highlights legal barriers to women’s economic participation for 189 countries worldwide, visualizing data collected by the World Bank in its Women, Business and the Law 2018 report. Women’s access to employment and economic opportunity depends on a range of factors and this interactive highlights one critical precondition of women’s economic participation: equality under the law. The following information draws on text from the World Bank report, summarizing their approach and assumptions. It further outlines the Council on Foreign Relations’ methodology for building the index, including its expansion of the World Bank’s initial scores.

The World Bank’s Women, Business and the Law report monitors laws and policies affecting women’s economic activity. Now in its fifth iteration, the report assesses legal gender barriers across seven indicators: accessing institutions, using property, getting a job, providing incentives to work, going to court, building credit, and protecting women from violence. The report uses formal laws as a starting point for analysis, and the report’s indicators—defined below—were selected based on input from legal practitioners around the world.

While Women, Business and the Law focuses on law and policy, a large gap often exists between laws on the books and their implementation. Governments should address the inequalities that prevent women from achieving their economic potential, starting with ensuring a level playing field under the law, which is a critical first step to closing the economic participation gap between women and men.

The World Bank’s methodology was designed to be an easily replicable way to benchmark the legal and regulatory environment for women as entrepreneurs and employees. A major consideration for the project is that the indicators are comparable across economies. The indicators are based on standardized assumptions. For example, a standardized assumption for maternity leave is that the woman is having one child. While maternity leave rules often differ for twins, only data for individual births is captured by the question.

Another assumption is that the woman is located in the largest business city of the economy. However, legislation may differ within federal economies, where laws affecting women can vary by state. Even in nonfederal economies, women in rural areas and small towns may face more restrictive local legislation.

In 2018, the World Bank for the first time provided a score for each of the seven indicators. To calculate these, the World Bank selected a sample of questions within each indicator and scored them. In their report, World Bank researchers detailed how the answers were standardized and made comparable across all countries, how the questions were scored, and what assumptions were made. The indicator scores (a number between 0 and 100, 100 being the best) were obtained by calculating the unweighted average of the scored questions in that indicator and then scaling the result to 100.

The World Bank scored a total of fifty questions, all of which fall into three categories: (1) explicit gender-based differences that affect women’s entrepreneurship or employment (for example, gender-based job restrictions); (2) the absence of laws that protect women (for example, lack of legislation on sexual harassment); and (3) institutions or processes likely to help women (for example, antidiscrimination commissions).

The World Bank requires each legal data point to have a citable legal source, and sources for every data point are posted on the project website to ensure that the data is transparent. The data was collected by local experts working in each of the 189 countries covered in the report, through conversations, questionnaires, and field visits by the World Bank team. The information that local experts provided was checked for accuracy through a rigorous review process.

The World Bank’s project website outlines assumptions made in the raw data collection.

To develop the Women’s Workplace Inequality Index, the Women and Foreign Policy program at the Council on Foreign Relations (CFR) calculated a straight average of each of the seven indicator scores, using updated figures as outlined below. Scholars then ranked countries based on their overall average score between 0 and 100 (100 being the best). For countries with the same score, CFR assigned them the same rank number and left a corresponding gap in the index. Thus if two (or more) countries tie for a position in the ranking, the position of those ranked below them is unaffected (i.e., a country comes in third if exactly two countries score better than it and fourth if exactly three countries score better than it).

CFR scholars calculated new totals for four indicator scores—accessing institutions, getting a job, protecting women from violence, and providing incentives to work—after adding six additional questions drawn from the World Bank’s data set that were not included in initial scores. These are listed below, along with the methodology for scoring each question and background on their significance to women’s rights and opportunities. Scholars recalculated the indicator scores, repeating the World Bank’s methodology of finding the unweighted average of the scored questions in that indicator (now including CFR’s selected scored questions) and then scaling the result to 100.

Women, Business and the Law report question: Are there clear criminal penalties for domestic violence?

Background: Girls are disproportionately affected by child marriage; fifteen million girls every year marry before their eighteenth birthday. Girls’ physical and emotional health, education, and wage-earning prospects are all jeopardized when they marry as children. Girls who marry early are left without the skills, knowledge, and social networks to financially support their household, which maintains their low societal status and makes their families vulnerable to an intergenerational cycle of poverty that hinders the development of their communities. While most countries set eighteen as the minimum age of marriage, several countries provide exceptions, such as parental consent or judicial authorization, which undermines the efficacy of legal protections against child marriage.

Indicator: Getting a job

Background: Maternity, paternity, and parental leave schemes can contribute to the redistribution of unpaid care work. Ensuring job-protected leave of adequate length and pay for both parents is critical to keeping women in the workforce. The World Bank has found that promoting fathers’ leave may contribute to leave policies that do not exacerbate gender inequality.

Women, Business and the Law report question: Must employers provide leave to care for sick relatives?

Background: Women’s economic participation is reduced by their disproportionate burden of caring for children, the sick, and the elderly. Policies that encourage and permit men and women to provide this care will encourage greater gender equality in the workforce.

Women, Business and the Law report question: Can a woman (married or unmarried) confer citizenship to her children in the same way as a man?

Background: When women are legally prohibited from passing on citizenship, their children in turn may be at risk of statelessness, without access to education, health care, employment, or identity documents. Without proof of identity, it is more difficult to find employment, open a bank account, receive credit, and access small-business loans.

“Accessing institutions” explores women’s legal ability to interact with public authorities and the private sector in the same ways as men. This indicator also covers constitutional protections and the use of legislated quotas to increase women’s representation in public and private decision-making bodies.

“Getting a job” assesses restrictions on women’s ability to work, such as prohibitions on working at night or in certain occupations. This indicator also covers laws on maternity, paternity, and parental leave; retirement ages; equal remuneration for work of equal value; and nondiscrimination in the workplace.

“Going to court” explores the ease and affordability of accessing justice by identifying the presence of justice institutions, procedures that support equality of access to the legal system, and women’s representation on constitutional courts.

Gross national income (GNI) is a measurement of a country’s income. It includes all the income earned by a country’s residents and businesses, regardless of whether it is produced in the country or abroad.

“Protecting women from violence” examines the existence and scope of legislation on violence against women, including domestic violence, sexual harassment, marital rape, and child and early marriage, and on the availability of protection orders for victims.

“Providing incentives to work” examines personal income-tax credits and deductions available to women relative to men and the provision of childcare and education services.

“Using property” analyzes women’s ability to access and use property based on their ability to own, manage, control, and inherit it.

“The Economic and Career Effects of Sexual Harassment on Working Women” (Gender & Society, 2017)

This CFR digital interactive is a product of the Women and Foreign Policy program, generously supported by the Bill & Melinda Gates Foundation. The project was informed by the guidance of the World Bank’s Women, Business and the Law team, in addition to other distinguished experts from multilateral organizations, academia, government, and the private sector.

Director of Product and Design

Copyright © 2018 by the Council on Foreign Relations ® Inc.

Women and the Law: Leveling the Global Economic Playing Field

Legal inequalities matter—not only to women but also to our bottom lines. 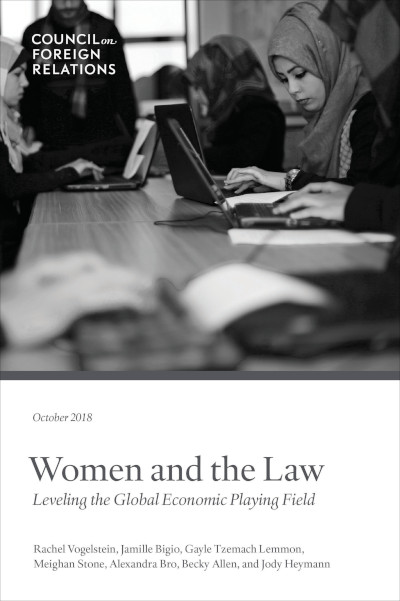 Get the latest resources and news about the status of women and girls around the world: subscribe to the Women and Foreign Policy Update newsletter.