Skip to main content
America Is a Safe Place

In yesterday’s post, I highlighted a piece that my colleague, Michael A. Cohen, and I have in the current print edition of Foreign Affairs: “Clear and Present Safety: The United States Is More Secure than Washington Thinks.” We challenge the prevailing rhetoric of Washington-centric threat inflation by arguing that the world today is one with fewer violent conflicts, increased political freedom, and greater economic opportunity than at virtually any other point in human history.

The chronic exaggeration of U.S. national security threats also extends to the security of individual Americans. Although you would never know from the evening news or tabloid newspapers, not only are Americans relatively safe in the world, but they are relatively safe at home as well—at least from foreign threats, or those outside their control.

Consider the threat of foreign terrorism, which is a legitimate concern after the tragedy of 9/11. According to the latest U.S. government data, of the 13,186 people who died in terrorist attacks around the world in 2010, only 15 were private U.S. citizens. Of the 30,665 wounded, 90 were U.S. citizens. None of the Americans killed or wounded by terrorism, moreover, suffered the attacks in the United States.

Since 9/11, a total of 238 American citizens have died from terrorist attacks, or an average of 29 per year. To put that in some perspective, according to the Consumer Product Safety Commission, the average American is as likely to be crushed to death by televisions or furniture as they are to be killed by a terrorist.

A recent study from Duke University found that, since 9/11, eleven Muslim Americans were involved in active terrorist plots in the United States, which killed thirty-three Americans. Over that same time period, there have been nearly 150,000 murders and over 300,000 suicides. (It should also be noted that all major categories of crime have fallen across the country over the past five years.)

If you’re not convinced yet, consider another cluster of information on transportation deaths from the latest available government data:

Instead, by far the biggest threat to Americans is themselves. According to a recent World Health Organization report, noncommunicable diseases (NCDs) for 87 percent of all American deaths, compared with 64 percent in the rest of the world. Prevalent NCDs include cardiovascular disease, cancer, diabetes, and chronic lung disease, and are primarily caused by four behavioral risk factors: smoking, diet, lack of physical activity, and alcohol. The silver lining is that each of these risk factors can be managed and prevented, if we are willing to integrate healthier habits into our daily lives.

To put it simply, America is a safe place, and—for most of us—we are our own worst enemy.

For the latest U.S. mortality statistics from the World Health Organization and the Center for Disease Control, please see below: 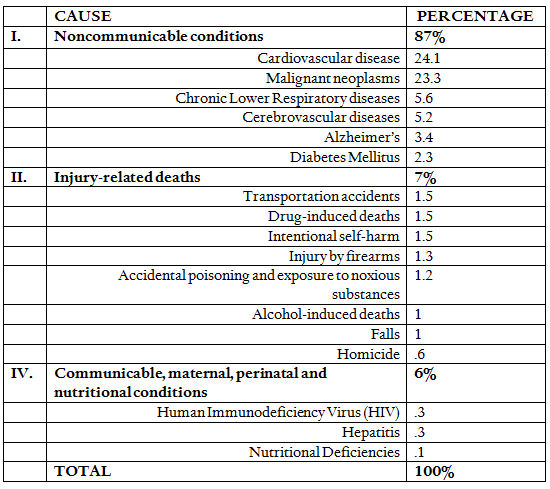 For how these U.S. statistics compare to the rest of the world, please read my previous post, "How We Die."

Clear and Present Safety: The United States Is More Secure than Washington Thinks