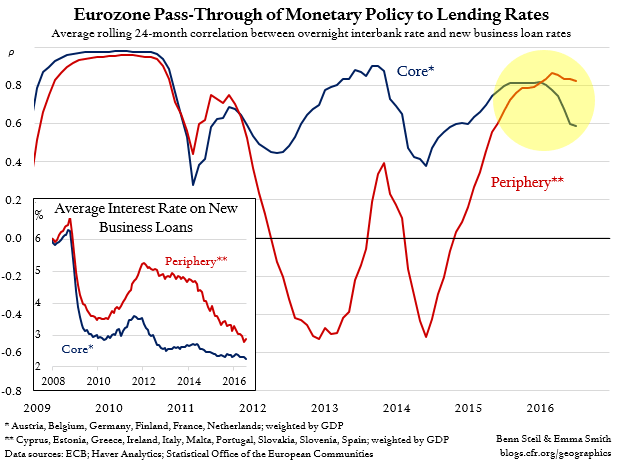 Back in 2013, we showed that the ECB’s monetary transmission mechanism had broken down in the crisis-hit periphery countries.  ECB rate cuts were not being passed on to rate cuts on new loans to businesses.

For all the bad news that has come out of Europe since then, it is noteworthy that this mechanism has now been restored in most periphery countries.  In fact, the link between ECB rates and the rates banks charge on new business loans is now, on average, stronger in the periphery than in the core—as can be seen in the graphic above.  (We use the overnight interbank rate as a substitute for the ECB’s policy rate, as it captures both the ECB’s policy rate and the effects of its QE and lending to banks.)

The turning point was the ECB’s June 2014 announcement of a negative deposit rate and cheap long-term loans to banks—known as targeted long-term refinancing operations, or TLTROs. This is because these new measures have disproportionately benefited periphery banks.

Periphery banks borrow from the ECB, and have been able to lower their funding costs by switching into cheap TLTROs—which have gotten cheaper with the decline in the ECB policy rate.  Banks in Italy and Spain borrowed at least 90 percent of new TLTRO lending in the June disbursement.  Banks in the core countries, in contrast, tend to hold funds at—rather than borrow from—the ECB, and have been disproportionately hit by the negative deposit rate.  Last year, German banks paid €248 million to keep funds at the ECB.

The ECB’s asset purchase program (APP)—which began in late 2014, and was expanded to include sovereign bonds in 2015—has also disproportionately benefited periphery banks, which made capital gains on their security holdings.  Core banks, on average, did not.

With lower funding costs from TLTROs, and higher profits from APP, periphery banks—with the exception of Ireland and Greece (which was cut off from ECB borrowing until recently)—have lowered lending rates to business customers considerably more than core banks have, as the small inset graph shows.

Of course, the health of eurozone banks, and the economy broadly, remains precarious.  But the fact that ECB policy is once again affecting lending rates across the region represents a necessary step on the rocky path to a sustained recovery.

The Global Economy: Heading Toward a Dark Winter?