John E. Herbst, who served as U.S. ambassador to Ukraine from 2003 to 2006, says Ukrainians will likely proceed with presidential elections as scheduled on May 25, but he predicts pro-Russian separatists will try to disrupt the vote. In the event of disrupted voting, Herbst says Washington should be prepared to mount far more sweeping sectoral sanctions against Russia. The aim of Russian president Vladimir Putin, he says, is to prevent Ukraine from following a Western orientation and developing a democratic society but it’s not clear if he is willing to sacrifice his economy for those goals. 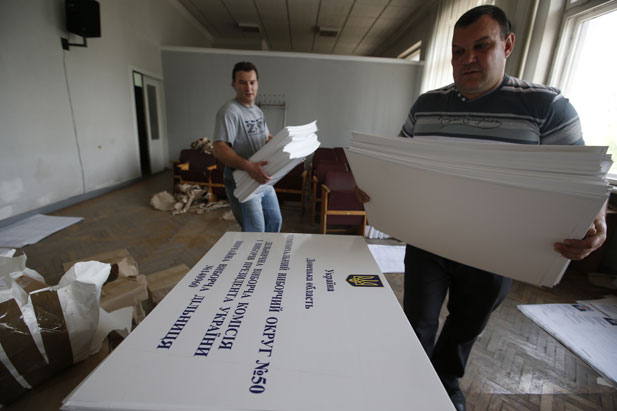 Members of a regional electoral commission prepare for the upcoming presidential election at the executive committee headquarters in the eastern Ukrainian city of Krasnoarmeisk. (Photo: Maxim Zmeyev/Courtesy Reuters)

What is the outlook for Ukraine in the coming weeks? Do you think the presidential elections will take place on May 25 as scheduled?

It is very important that the elections take place on May 25 as scheduled, and I think there is a good chance that will happen. But it’s also true that the separatists in the eastern Ukraine will do their best—cheered on by the Kremlin—to disrupt those elections.

Do you think the elections will occur in places like the Donetsk region?

That largely depends on what the Ukrainian authorities do. The separatists do not control all of Donetsk; the same is true of Luhansk. Of course, Ukraine has a substantial police force, special police, and a military. So in theory it should be able to control much of these cities and towns and allow those votes to take place. And I think if they do that, there will be an effort by the separatists to disrupt the elections. But if you look at the relative balance of power, the Ukrainian security forces, broadly defined, should be able to control the situation. What the authorities need to do is cordon off the separatists and the supply of people and money coming from Russia.

Europeans, led by German foreign minister Frank-Walter Steinmeier, have been pushing the authorities in Kiev to talk with separatists in the East. Do you think this will happen?

The separatists in the East are controlled by the Kremlin; they are not an independent voice. [Russian president Vladimir] Putin is trying to disrupt the presidential election in Ukraine. From my point of view, it would not be terrible if there was a conversation.

Let’s say the elections take place on May 25 without the separatists taking part. Who’s likely to win?

Petro Poroshenko has a clear advantage. (He made his money in chocolate, and is called the "chocolate king.") But it’s foolish ever to disregard Yulia Tymoshenko. She’s an extraordinary politician. I also wouldn’t rule out someone from the East drawing reasonable numbers

And what would be the implications for the future if either Poroshenko or Tymoshenko wins?

I should also mention Serhiy Tihipko [former central bank head from eastern Ukraine who also served as deputy prime minister in a government under President Viktor Yanukovich]. His poll numbers are slightly higher than Tymoshenko’s. Poroshenko will clearly get a plurality in the first round, but if he does not get the majority he is not a shoo-in to win the run-off election. If Tihipko and Tymoshenko can reach an understanding it is not a sure thing that Poroshenko will win. Tymoshenko comes out of the reform side. Because she is so keen to achieve her objectives, it is conceivable she would take [the country] along some wild rides. Tihipko would be a credible leader.

How would you describe the U.S. response to the crisis?

We have done a credible job, but not a great job. The Obama administration understands that this is blatant aggression—a challenge to the postwar order. And given the new Putin doctrine for protecting all Russian speakers, it has responded quickly and with a fair amount of passion and effectiveness. Washington has imposed sanctions as a disincentive to the Kremlin, and gotten Europe to do the same, if somewhat reluctantly.

However, stronger sanctions may be needed. If the general elections on May 25 are disrupted in a serious way, sectoral sanctions must be imposed in a serious way. If we are unable to persuade the Europeans to come along on sectoral sanctions, we have one trump card, which is to go after Russia the same way we went after Iran. If we do that, the Europeans will have no choice but to go along because they will not be able to do any business with the United States. Russia may be important to Italy or Great Britain, but the United States is far, far more important as a business partner. But there is also a military component. I am not advocating that U.S. troops be sent to defend Ukraine, but there is no reason why we can’t send counterinsurgency help to Ukrainians in the form of body armor, night-vision goggles and radio communication, along with properly vetted intelligence support. And to help ward off the possibility of a Russian invasion, we should be providing antitank and antiaircraft weaponry and training to go along with this.

What is your impression of Putin’s policy? He recently voiced support for elections in Ukraine, and has called for the parties to reconcile. What is he trying to accomplish?

Putin’s policy is relatively clear. His goal is to exercise considerable influence in Ukraine to prevent the country from following a Western orientation, which includes not just closer economic ties with the EU, but also developing a democratic society. He wants to achieve his objectives without serious cost to his regime and the Russian economy. His ambivalence is all tactical. How does he destabilize or control Ukraine without suffering major sanctions from the West? Is he willing to sacrifice his economy for his goals in Ukraine? I can’t answer those questions.

How has the crisis affected U.S.-Russian relations?

It is clearly at a low point. It is because Putin is clearly committing aggression, first in Crimea and now in Ukraine. The Russians have been cautious about taking any steps against the West. They are hoping the sanctions levied so far are the end of it. The Kremlin is also trying to drive a wedge between the United States and Germany.