For thirteen years, U.S. counterterrorism strategy has relied on an assumption that arose after 9/11: international terrorist attacks against the United States require a safe haven. Denying safe havens in Iraq and Afghanistan took nearly seven thousand American lives and will have an eventual estimated cost of $4 to $6 trillion.  More recently, this assumption served as the rationale for launching an open-ended war against the Islamic State of Iraq and Syria (ISIS), which is nearing its sixth month of engagement.

In a ForeignPolicy.com article published today, “The Myth of the Terrorist Safe-Haven,” we argue that this assumption requires in-depth study, given this counterterrorism campaign has not diminished the size of terrorist organizations with which the United States is at war. Rather, this supposition is based on a selective, and flawed, understanding of the multifaceted factors that enabled the attacks on the Twin Towers and Pentagon. Our analysis found that policymakers over rely on the myth of 9/11—the safety that Osama bin Laden and his aides enjoyed in Afghanistan resulted in the attacks; the sources of terrorist threats are often mischaracterized; and, some forms of terrorism are intentionally overlooked.

Analyzing the correlation between a terrorist organization’s “safe haven” and its capability to conduct international attacks against Americans or the U.S. homeland faces methodological challenges. These include different counting methods for American killed by international terrorism, or terroristic acts in the United States; varying categorization of attack sources and motives, such as jihadist, non-jihadist, or homegrown; and a lack of publicly recorded terrorist plots against the United States.

To determine the number of Americans killed by international terrorism since 9/11, we gathered data from the State Department’s Country Reports on Terrorism, which breaks down Americans killed according to country. For 2002, 2004, and 2008, when the State Department did not publish this data, we relied upon RAND’s Database of Worldwide Terrorism Incidents (2002), the Bureau of Consular Affairs (2004), and the National Counterterrorism Center’s 2008 Report on Terrorism. We then cross-checked the countries in which deaths occurred with the State Department’s Foreign Terrorist Organization List for the corresponding year to determine how many Americans were killed in a safe haven country.

A total of 335 Americans have died from terrorism since 9/11, including the 51 killed in domestic incidents, 17 of whom were killed by jihadist terrorist attacks. A majority were killed abroad. As shown below, the top two countries in which the most Americans were killed were combat zones in Iraq and Afghanistan—the very places where the United States started wars to prevent or destroy safe havens. Of the remaining, only three of eight are safe haven countries. Most notably, following combat zones, the top four countries are not safe havens. 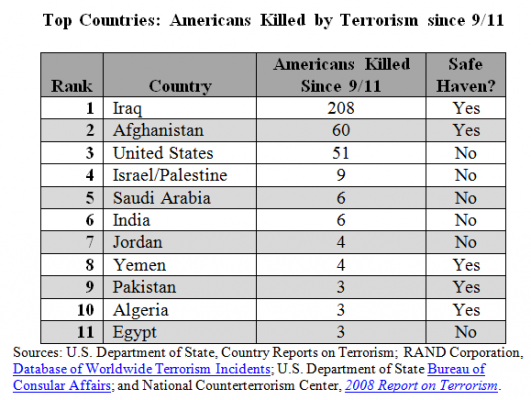 Since the State Department does not gather data on incidents of international terrorism within the United States, we relied upon the University of Maryland’s Global Terrorism Database (GTD). We gathered data on the total number of terrorist attacks in the United States since 9/11 and their perpetrators, and determined how many of those resulted in the deaths of Americans. It should be acknowledged that the GTD has faced criticism, particularly from the Chicago Project on Security and Terrorism, which determined that the use of government data exaggerates the recent increase in terrorist attacks because violence during the Iraq war was severely under-reported, and noted that the GTD’s collection standards have changed several times. However, staff at the GTD responded to the critique stating that government funders “have never influenced data entry decisions or encouraged a particular interpretation of the data,” and concluded that GTD and Chicago Project data were “extremely dissimilar” when compared.

After finding that all successful jihadist attacks since 9/11 were homegrown, we gathered data on jihadist attacks and plots against the United States from a Congressional Research Service report, “American Jihadist Terrorism: Combating a Complex Threat,” which identifies whether perpetrators of plots and attacks took part in “intended or actual plotting or training abroad.” However, since not all of CRS’ descriptions of the incidents explicitly states where the perpetrators traveled to, we filled in the gaps using Heritage Foundation’s report, “60 Terrorism Plots Since 9/11: Continued Lessons in Domestic Counterterrorism,” to clarify which had traveled to safe havens.

What the Pentagon Wants in a New AUMF: Perpetual Warfare