The implications of Brexit understandably have dominated the global economic policy debate. But there are issues other than Brexit that could also have a large global impact: most obviously China and its currency.

The yuan rather quietly hit multi-year lows against the dollar last week. And today the yuan-to-dollar exchange rate (as well as the offshore CNH rate) came close to 6.7, and is not too far away from the 6.8 level that was bandied about last week as the PBOC’s possible target for 2016.* 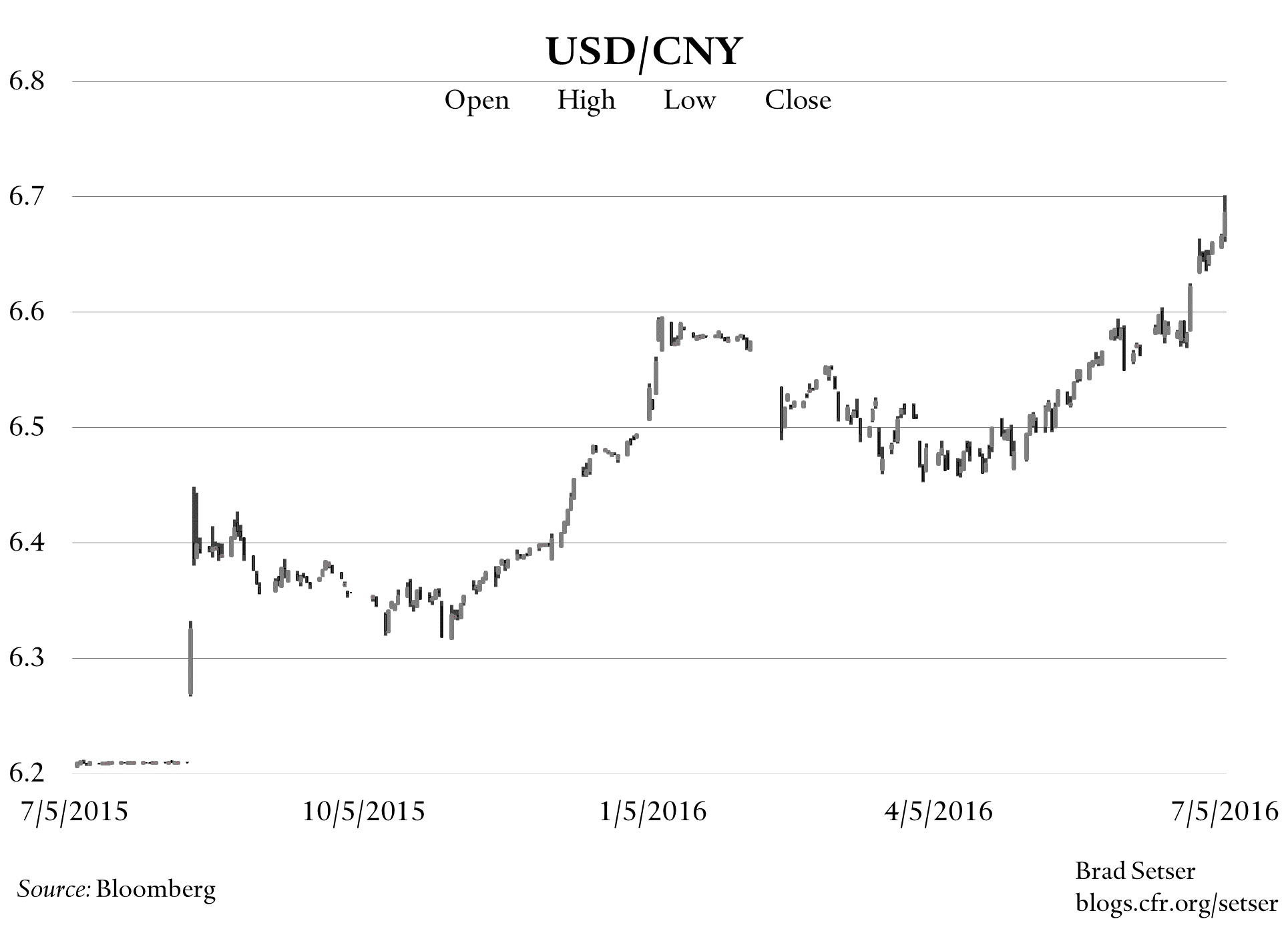 The dollar is—broadly speaking—close to unchanged from the time China announced that it would manage its currency with reference to a basket in the middle of December.* 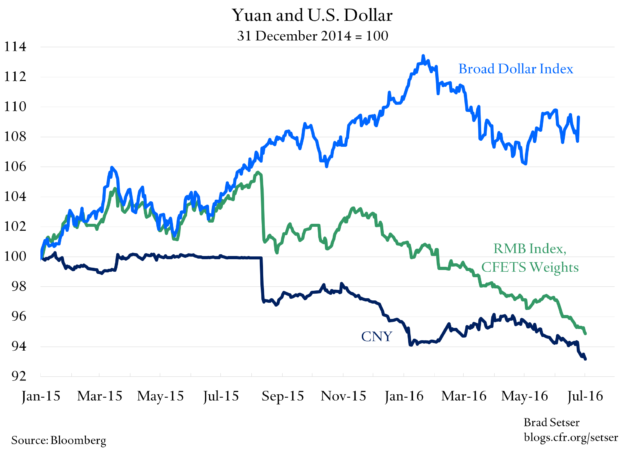 So even if the yuan was a bit overvalued last summer, it isn’t obviously overvalued now.

China’s manufacturing export surplus remains quite large. And export volume growth—which was falling last summer—has now turned around. It is not realistic for Chinese export volumes to outperform global trade by all that much any more; China is simply too big a player in global trade. China will have to adjust to a new normal here.

My hope is that China will pocket the depreciation achieved over the last several months, and will now start managing its currency more symmetrically or even be somewhat more willing to allow a stronger dollar to flow through to a stronger yuan. 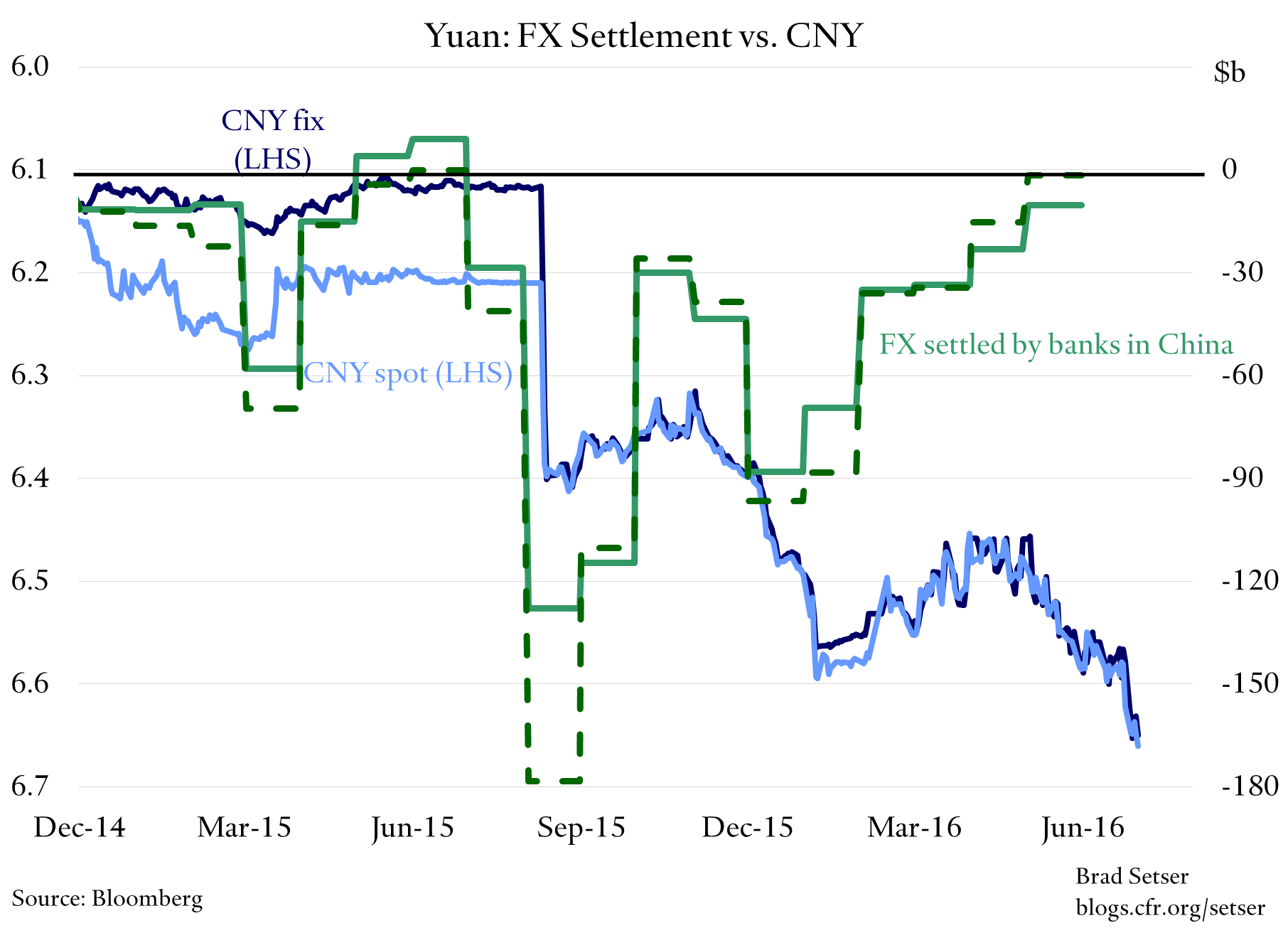 Since January, the expectation of stability (more or less) against the dollar together with the repayment of (unhedged) external debt, a tightening of controls and the threat of intervention in the offshore market seem to have reduced outflow pressures. The fairly steady depreciation against the basket has coincided with smaller reserve sales.*** But there is a risk that speculative pressure could return if the market concludes that China thinks it can now depreciate against a basket thanks to tighter controls and less external debt.

* Reuters: "China’s central bank would tolerate a fall in the yuan to as low as 6.8 per dollar in 2016 to support the economy, which would mean the currency matching last year’s record decline of 4.5 percent, policy sources said." The PBOC indirectly pushed back against the story, and has reiterated that it is committed to a "basically stable" renminbi. The Reuters story can also be read two ways: as a signal that China wants a steady depreciation against the dollar, or a signal that there is a limit on how far China is willing to allow the yuan to depreciate against the dollar even if the dollar starts to appreciate against the majors.

*** Goldman’s Asia team has suggested that Chinese firms have been settling imports with renminbi in 2016, and this flow likely reflects an orchestrated attempt to limit pressure on the currency that should be counted as a form of hidden intervention. I will take that argument up at a later time. But even with the Goldman adjustment, the pace of reserve sales (using the settlement data) has fallen from $100-150 billion a month in January to $25 billion or so in April and May.