Earlier today, the International Monetary Fund (IMF) Board approved the inclusion of the Chinese renminbi (RMB) as a fifth currency in the special drawing rights (SDR), the IMF’s currency, as of October 2016.  The move was expected and IMF Board approval was never in doubt once the U.S. government signaled that it would not oppose the step. My read is that the Fund staff acted properly in arguing that the RMB now meets the test of being freely useable for international transactions by its members (though some have argued that the IMF was bending its rules for political reasons). Of course, Chinese financial markets remain significantly restricted for private investors, but the SDR’s current primary use is for transactions between members of the IMF (governments). From that narrow perspective the RMB can be judged to be widely used and widely traded because a country receiving RMB as a result of IMF transactions should be able to switch it to any other basket currency at low cost, at any time of the day or night, somewhere in the world. So too perhaps are more than a dozen other currencies freely useable by this measure, but the SDR is for now limited to the largest of those currencies by a separate (export share) measure. Consequently, next year the RMB goes into the basket with a weight of 10.9 percent (compared to today’s weights, most of China’s share comes from the U.S. dollar which will retain a 41.7 percent share; the other shares will be 30.9 percent for the euro, 8.3 percent for the yen, and 8.1 percent for the pound sterling).

While some have argued that the move is a “significant” step for the international monetary system, it is more properly seen as a quite small and largely symbolic step in a long and gradual path of internationalization of the RMB, a reform process that is likely to slow following this summer’s market turmoil. Indeed, even prior to the crisis the IMF and others had warned that Chinese financial market liberalization needed to be cautious and sequenced, with a more urgent priority in bringing market discipline to large borrowers. Nonetheless, the announcement validates and perhaps reinforces the argument for expanding the RMB’s role in markets, and is consistent with measures from the Chinese in recent months to move in this direction. In this regard, the far more important announcement this week was the creation of a working group led by Michael Bloomberg aiming to provide a framework for RMB trading and clearing in the United States, as this could influence the private use of the RMB and SDR. The door for this initiative was opened during the recent state visit by Chinese President Xi, and operationally is independent of the IMF’s announcement though fueled by the same reform momentum.

In the near term, the main economic impact of the inclusion of the RMB in the SDR is to raise the SDR interest rate (because Chinese interest rates are higher than rates on other currencies in the basket). Consequently, IMF borrowers will pay more, an amount that has been predicted by the IMF staff to be 27 basis points, but which could well average far more over the cycle. While this may seem small compared to normal swings in the interest rates of the major currencies during the process of normalization, it’s worth remembering that countries such as China in the process of convergence to industrial country levels of income are expected to have higher real rates than developed countries (i.e., interest rate differentials should not be expected to be offset by exchange rate moves). Conversely, if the RMB remains stable relative to the dollar, the exchange rate dynamics of the new SDR will be largely unchanged relative to the old basket. Finally, an important question will be the political impact in the United States, where Chinese and IMF-related legislation (such as IMF quota reform) already faces rough sledding. 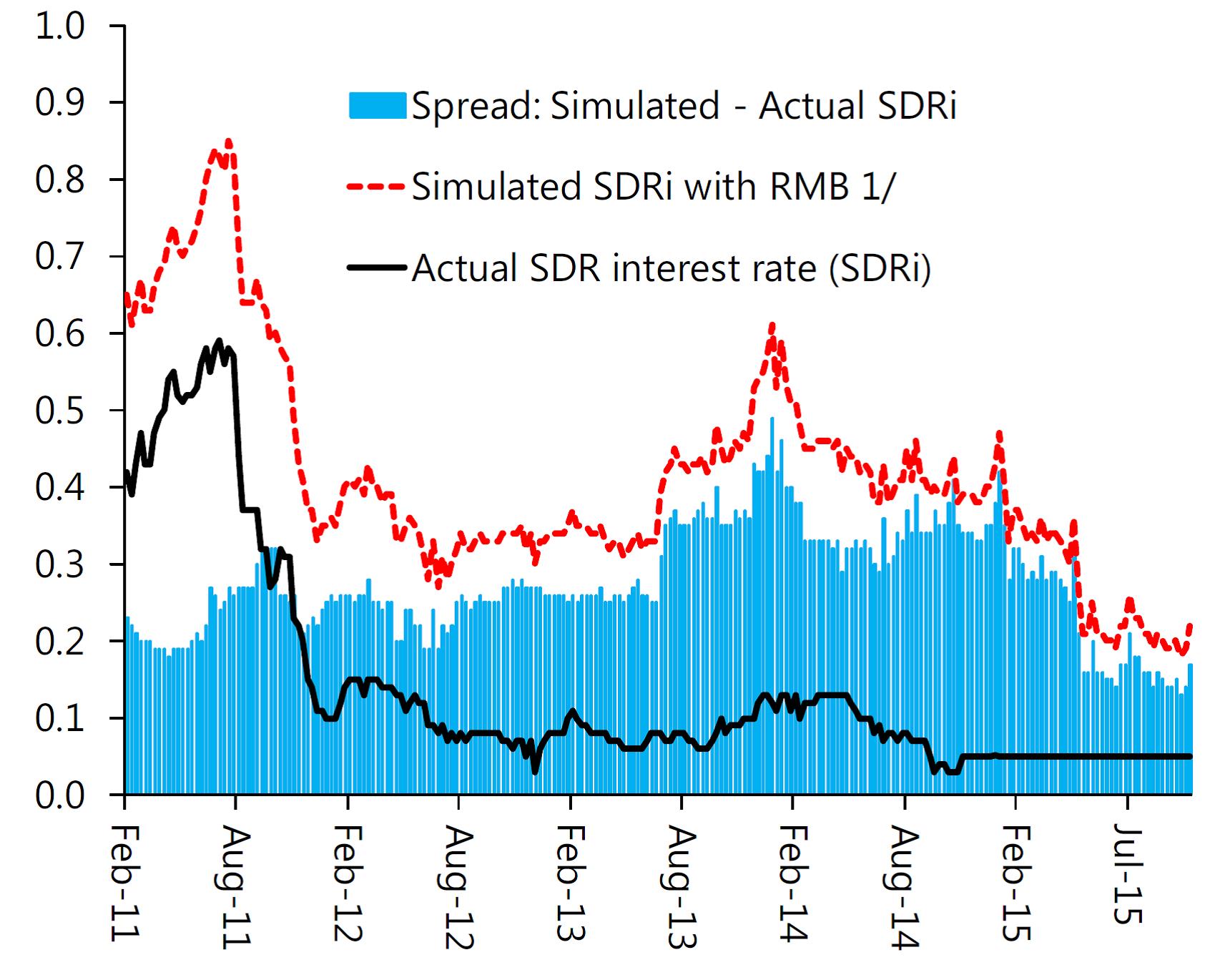 Source: IMF "Review of the Method of Valuation of the SDR"