Throughout the Greek crisis, policymakers have acted on the assumption that Greece’s best chance at sustainable growth is through the conditionality and discipline of an IMF-EU adjustment program. Already, the desire to stay in the eurozone and receive the promised rescue package of at least €86 billion has led to significant legislative measures, and the ESM and IMF programs under negotiation will be comprehensive in the scope of their structural reforms. In contrast, "Grexit" would be chaotic, and at least initially, make it difficult for any government to reach consensus on strong policies needed to restore durable growth. In that environment, the boost to growth from devaluation could prove short-lived.

A recent article in the European Central Bank’s May Economic Bulletin provides a note of caution with this conclusion. It finds that, looking across Europe since 1999, there has been little economic convergence inside the Eurozone. Instead, the bulk of the convergence that has taken place has occurred in the non-euro area countries of Eastern Europe (see chart). Within the Eurozone, easy capital flows prior to the crisis and an incomplete economic and financial union prevented shocks from being adequately buffered, and has limited growth in periphery countries. They conclude policies matter:

"An important lesson from the euro area sovereign debt crisis is that the need for sound economic policies does not end once a country has adopted the euro. There are no automatic mechanisms to ensure that the process of nominal convergence which occurs before adoption of the euro produces sustainable real convergence thereafter. The global financial crisis that started in 2008 has showed that some countries participating in Economic and Monetary Union (EMU) had severe weaknesses in their structural and institutional set-up. This has resulted in a large and protracted fall in real per capita income levels in these countries since 2008." 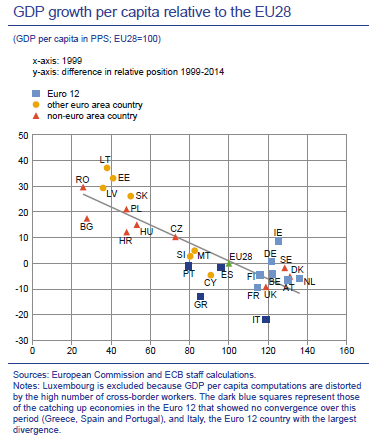 This is not an argument for Grexit. The reverse also holds: the need for sound policies does not end once a country has left the Eurozone. Rather, their work reinforces the notion that it is ownership of the reform process by the government and its population, rather than the discipline that comes from euro area membership, that is the single most important factor behind a successful adjustment effort.

Taking Stock of the Greece Crisis