This blog was coauthored with Lauren Hoffman, a former intern with the Women and Foreign Policy program.

Today, December 9, is International Anti-Corruption Day, organized by the United Nations Development Program (UNDP) and the United Nations Office on Drugs and Crime (UNODC) to fight corruption. As they report, "every year $1 trillion is paid in bribes while an estimated $2.6 trillion are stolen annually through corruption – a sum equivalent to more than 5 percent of the global GDP." This year’s theme, “United Against Corruption,” highlights corruption as one of the largest impediments to achieving the Sustainable Development Goals (SDGs).

Immigration officers have been caught exchanging sex for a green card or approval of a refugee application. United Nations peacekeepers have bartered relief goods for sex. Teachers have demanded sex in exchange for good grades. Nine out of ten women working in Tanzania’s public sector reported that senior male officials had used their positions of power to extort sexual favors from them. There is a growing prevalence of online threats, including blackmail and coercion, in the United States and elsewhere.

Sexual extortion, or what law enforcement officials commonly call sextortion, is a type of corruption in which “sex rather than money is the currency of the bribe,” and it affects women and girls (and some men and boys) around the world. Despite its prevalence, it’s rarely prosecuted (as either corruption or a sexual crime), it’s less likely to be reported than other forms of corruption, and it’s not tracked by most corruption measures. Greater public attention is needed to address sextortion as a serious crime that causes physical and mental harm and undermines confidence in public institutions.

While there is anecdotal data on the prevalence of sextortion, it’s not systematically recorded. The shame and stigma associated with sexual crimes may prevent victims from coming forward, and when they do, they often face barriers in the criminal justice system to file and pursue a sextortion claim. Regional and global instruments also don’t capture sextortion: none of the most common tools used to measure corruption include sex-disaggregated data, and so do not track how men and women are affected differently by corruption. From what data is available, we know that poor women are especially at risk of “petty” corruption (when officials sell public services rather than deliver them by right), because they may be more dependent on public officials for access to such services as health care, water, or education, and, with lower literacy levels, they may have less awareness of their entitlements to public programs, making them more susceptible to extortion.

In cases where sextortion is reported, it’s not always prosecuted. While international tools like the United Nations Convention Against Corruption (UNCAC) and the Convention on the Elimination of all Forms of Violence Against Women (CEDAW) clearly prohibit sextortion, in some countries, domestic laws don’t recognize sexual exploitation as a form of corruption. In other countries, laws exist that could be used to protect against sextortion but judges or lawyers don’t apply them, viewing the sexual extortion as “consensual” and therefore non-violent, or as a lesser form of corruption than financial abuse. Both views miss the significant harm caused by sextortion - to the individual, and to the strength of the public institutions.

To reduce overall corruption, protect women and girls from the harms caused by gender-based violence, and improve trust in public institutions, countries should recognize and address sextortion as a significant but often ignored form of corruption and abuse. 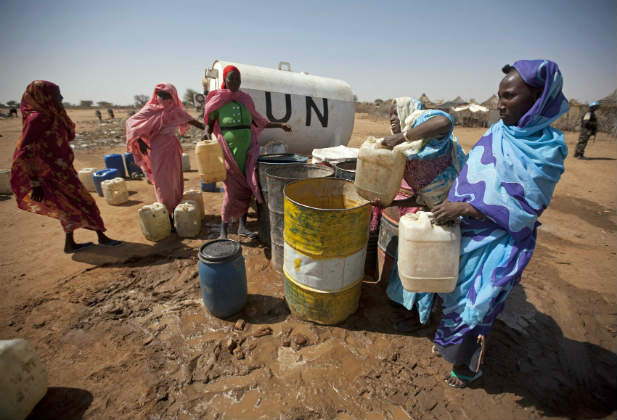 Women collect water from a tank at a camp for displaced people, January 10, 2011. REUTERS/Albert Gonzalez Farran/UNAMID/Handout

A first step is better data. Data will help in the design of more effective anti-corruption laws and programs that recognize and target sextortion. Corruption tools should track it, and local and national complaint mechanisms should have clear procedures for reporting and investigating sextortion.

A second step is stronger anti-corruption laws and policies at national level. This will enable countries to improve accountability by increasing their prosecution of sextortion crimes. Through a 2015 study to “name, shame, and end” sextortion, the International Association of Women Judges analyzed gaps in criminal justice systems around the world to address sextortion, and recommended steps to strengthen domestic laws and policies. There are also UN and NGO resources to help organizations and countries raise awareness about sexual exploitation and abuse and improve their systems to prevent and address it.

A third step is to encourage survivors to come forward. Ending the silence around sextortion will help create an environment where survivors feel supported to report abuses of power. They will be further encouraged to seek justice if their complaints are handled properly by judges, prosecutors, and police committed to stop the abuse of power through sexual exploitation.

This International Anti-Corruption Day, while countries around the world recommit to promoting good governance, they should recognize that their anti-corruption efforts will be stronger when they acknowledge sextortion as a crime and prioritize efforts to prevent and address it.

Women’s Power Index: Find Out Where Women Lead—and Why It Matters