Skip to main content
Five Years After the Israel-Hezbollah War 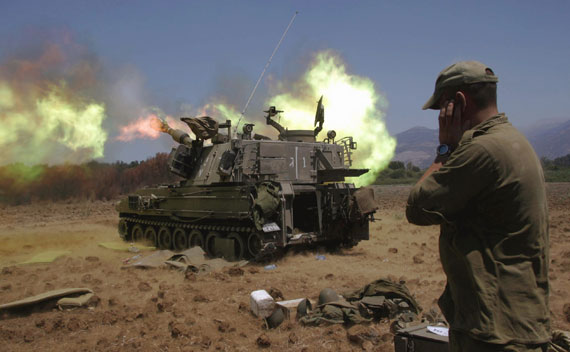 An Israeli artillery unit fires a shell towards Lebanon from its position near the Israeli-Lebanese border August 9, 2006. Israel decided on Wednesday to expand its ground offensive in Lebanon, and Hizbollah's leader vowed to turn southern Lebanon into a graveyard for Israeli troops and to unleash more rockets on the city of Haifa. REUTERS/Yonathan Weitzman

Five years ago today, the thirty-four day Israel-Hezbollah war began when a Hezbollah team crossed into Israel near the the village of Shtula and ambushed Israeli soldiers on patrol, killing three and taking two others back into Lebanon. Israel responded militarily by implementing well-rehearsed contingency plans that targeted bridges and access roads leading from the abuduction site, suspected Hezbollah rocket locations, the Rafik Hariri International Airport in Beirut, and Hezbollah’s Al Manar television station—which was knocked off the air for a full two minutes.

On the first day of the air strikes, Chief of Staff of the Israeli Defense Forces (IDF), Lt. Gen. Dan Halutz, predicted to Foreign Minister Tzipi Livni that “It’ll be over tonight. A few hours. Maybe tomorrow morning.” Thirty-three days later a ceasefire negotiated by the United Nations went into effect. Though civilians (overwhelmingly Lebanese) and combatants on both sides suffered, the Israel-Hezbollah war was essentially a draw, with Hezbollah projecting itself as the winner for standing up to one of the most powerful militaries in the world. Foreign militaries (and insurgents), academics, and historians analyze Israeli military operations very closely for lessons that can be applied in comparable settings. Presented below are the ten best assessments of what happened a half decade ago between Israel and Hezbollah.

1. Final Report of the Commission to Investigate the Lebanon Campaign in 2006, “Winograd Commission,” January 2008.

Chaired by former Justice Eliyahu Winograd, this group of experts was appointed by Prime Minister Ehud Olmert with a wide mandate. A forty-one point unclassified version of its report determined “overall” the war was “a serious missed opportunity,” with “serious failings and shortcomings” at the highest levels of political-military decisionmaking and in the “quality of preparedness, decisionmaking and performance in the IDF high command.”

2. Benjamin Lambeth, Air Operations in Israel’s War Against Hezbollah: Learning from Lebanon and Getting It Right in Gaza (Washington, D.C.: RAND Corporation, 2011).

These two well-connected Haaretz correspondents provide the most comprehensive retelling of the war, with special attention paid to the prime minister’s poor strategic judgment and leadership, and internal infighting of Olmert’s cabinet.

In this excellent analytical overview of Israel’s counterterrorism policies since 1948, Byman offers chapters on the “false promise of normalcy” that settled over Lebanon after Israel’s military withdrawal in May 2000. He also examines the IDF’s failure to maintain its armed forces at a high level of readiness and Hezbollah’s exploitation of Israel’s widespread casualty aversion.

Emphasizing the unsurprising nature of the conflict’s outcome, Matthews details the development of the IDF and Hezbollah’s doctrine and planning concepts before July 2006. He also gives a detailed assessment of the failed Israeli ground incursion into southern Lebanon, warning: “While the U.S. Army must be proficient in conducting major combat operations around the world, it is possible that years of irregular operations have chipped away at this capability, not unlike the situation encountered by the IDF.”

From a brilliant and original airpower thinker, Arkin combines his vast understanding of targeting strategy with on-site inspections in Lebanon, concluding that “Israel bombed too much and bombed the wrong targets, falling back upon cookie cutter conventional targeting in attacking traditional military objects.”

Kreps criticizes the airpower-centric Israeli strategy in the 2006 war, arguing that only a comprehensive strategy that integrates airpower and military force can be successful against a well-entrenched and dispersed adversary like Hezbollah.

Byman and Simon assess the winners and losers of the Israel-Lebanon war, and draw some preliminary lessons—especially the need for a consistent and credible information strategy—from a conflict that no side could view as an unequivocal success.

This August 2006 UN Security Council Resolution calls for “the immediate cessation by [Hezbollah] of all attacks and the immediate cessation by Israel of all offensive military operations” in Lebanon, as well as the expanded presence of  15,000 UN Interim Force in Lebanon (UNIFIL) peacekeepers. (3PA Extra Credit: The UN secretary general’s most recent report on implementation of resolution 1701.)

Kurtzer’s Contingency Planning Memo discusses the most plausible scenarios and associated warning signs of a "Third Lebanon War," its implications for the United States, and U.S. policy options to reduce the likelihood of renewed Israel-Hezbollah conflict and mitigate the consequences should it occur.

Controlling the Message in Libya