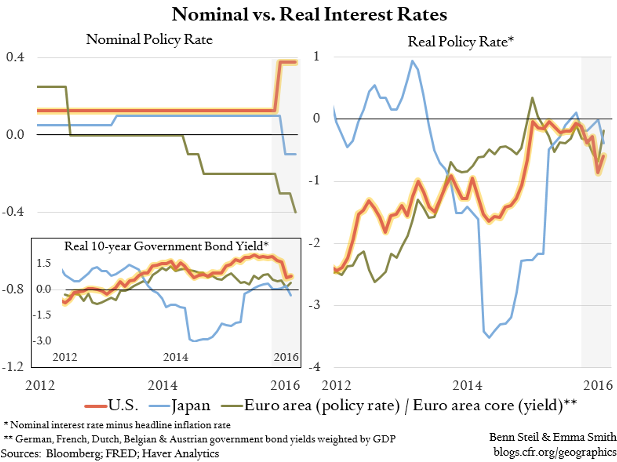 A Japanese interest-rate strategist recently told the Wall Street Journal that “every day is like being Alice in Wonderland” since the Bank of Japan’s foray into negative deposit rates on January 29. Though the yen initially fell, as the BoJ wanted, it reversed course quickly.  The yen has of late been trading near 18-month highs.  What is going on?

Although there has been a torrent of media-mocking directed at the strategy of negative rates, the markets seem to be reacting rationally to movements in rate differentials.  Though BoJ and ECB policy rates have fallen well below the Fed funds rate, as seen in the left-hand figure above, U.S. inflation readings have been trending upward.  This has pushed real inflation-adjusted U.S. rates below those in Japan and the Eurozone (EZ), as seen in the figure on the right.  Though the ECB has been plowing deeper into negative policy-rate territory, falling inflation—now at -0.1 percent (compared to +1.0 percent in the U.S)—means that real EZ rates have actually risen so far this year.  All this in turn means that Japan and Europe have become relatively more attractive destinations for savings than the United States, putting upward pressure on their currencies and downward pressure on the dollar.

The bad news for the BoJ and ECB is that they can’t push much further on negative nominal rates, since they are approaching the point at which banks will find it cost-effective to move into cash.  The good news, however, is that quantitative easing (QE) in both markets—asset purchases to push down longer-term rates—still seems to be working.  As shown in the bottom figure, real 10-year government bond yields in Japan and the EZ core are still lower than they are in the United States.  If the inflation differential with the U.S. keeps rising, however, the BoJ and ECB will have to pedal even harder on QE to keep their currencies down.