What should Congress and the Obama administration do to bring the federal deficit under control? Well, according to the Congressional Budget Office’s annual Budget and Economic Outlook, released today, the answer is quite simple: absolutely nothing at all.

For all the campaign talk of the United States facing a spiraling federal budget deficit leading to a crippling debt burden for future generations, the laws already passed by Congress and signed by the President are set to bring the budget under control surprisingly quickly. Under the so-called “baseline” assumptions, even with modest economic growth projections, the federal deficit is currently set to shrink from $1.3 trillion in 2011, or 8.7 percent of GDP, to just $196 billion, or 0.9 percent of GDP, by 2018. While the numbers will start creeping up slightly after that, and debt service costs will nearly double, the budget situation will remain entirely manageable and, barring an unexpected spike in interest rates, produce nothing close to a fiscal crisis. The debt-to-GDP ratio would fall from 75 percent to 62 percent by 2022. 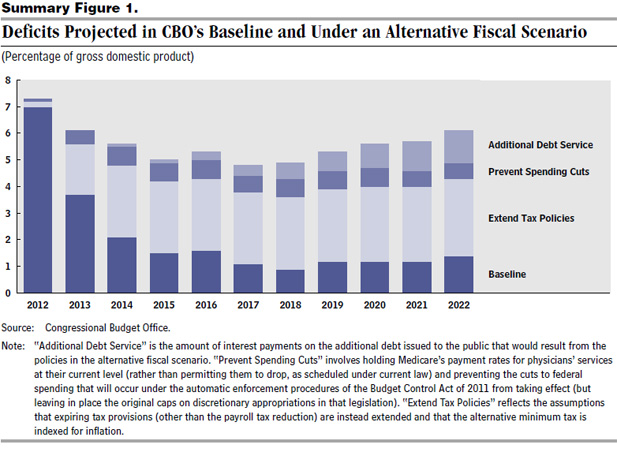 So why will no one pay attention to this, and instead read the CBO numbers, which are somewhat more pessimistic than the last forecast in August, 2011, as proof of a dire and worsening fiscal situation? Because neither Democrats nor Republicans are prepared to live with the consequences of the choices they have already made.

On the tax side, doing nothing means allowing the Bush tax cuts to expire in their entirety, allowing the payroll tax to rise back to its previous level, and forcing more taxpayers to pay the Alternative Minimum Tax (AMT). On the spending side, it would mean cutting reimbursements to doctors under Medicare, and implementing $1.2 trillion in cuts to defense and discretionary spending as agreed in last year’s budget deal.

Under this scenario--which, to repeat, requires absolutely no action by Congress--federal revenues would rise from 16.3 percent of GDP this year to 21 percent in 2022, significantly higher than the 18 percent average of the past 40 years. Mandatory spending (Social Security, Medicare, and Medicaid) would continue to rise in real terms, while discretionary spending would fall from 7.7 percent of GDP to just 5.7 percent, the smallest share in more than four decades. As the CBO notes, “the operations of the federal government would differ significantly from what they are today.”

None of this is good policy. A steep tax increase, especially over the next two years when the economy is still projected to be weak, would be poor timing that could further depress growth. The CBO projects significantly higher unemployment, more than 9 percent next year, if both the tax increases and spending cuts take place. And it makes far more long-term sense to restrain mandatory spending--which mostly goes to retirees--than cutting discretionary programs in education, infrastructure, research & development and other programs that benefit the current and future workforce.

But in the elusive search for a more sensible budget deal, why not start with a political agreement that accepts the baseline as an immovable target? In other words, Congress would be free to alter the mix and timing of tax increases and spending cuts, but the resulting budget deficit could be no larger than under the current baseline assumption. Simple? Of course not. But then there’s always the option of doing nothing.