When the North Atlantic Treaty Organization (NATO) gathered in Warsaw on July 8, the 28-member organization laid out a vision for its future. Facing pressing security challenges ranging from what to do about Russia to how to handle the self-proclaimed Islamic State, NATO leaders assessed how to make the Alliance more modern, ready, and responsive. They agreed that one way to do so was to better engage women.

Here’s a look at how NATO promotes the participation of women, and how it can best prepare itself for the challenges of the 21st century.

Investing in women’s participation to advance stability                                           Progress toward increasing women’s participation in peace and security processes has been slow but steady since NATO started this work in 2007, and a 2013 review laid out how NATO can better deliver on its commitments. It found that NATO’s policies and directives provide the organization with the necessary guidance on what to do, but that too few political and military leaders are familiar with the policies, and not enough staff are trained to implement them. The review suggested that improved training, increased leadership, and greater accountability were needed.

In Warsaw this month, world leaders recognized how women’s participation contributes to NATO’s core security objectives. They released a new action plan that seeks to increase the representation of women across the organization and its armed forces, implement mandatory gender training for all civilian and military staff, revise all of NATO’s planning and assessment tools to include a gender perspective, and require all operations to provide guidance on preventing conflict-related sexual violence.

It’s important that NATO recognizes that women offer valuable contributions to its core priorities, but it needs to deliver on these promises. Of all its operations, NATO has come closest to this in Afghanistan. There, NATO’s view is that securing peace requires ensuring the rights and opportunities of Afghan women, and that any reconciliation process must not only be Afghan-led but also inclusive of women. When it launched its Resolute Support mission in 2015, NATO committed to support the Afghan government to empower women to participate fully in all aspects of Afghan society. Implementation is uneven, but efforts are moving in the right direction.

NATO should extend to all of its engagements the level of commitment it has demonstrated to women’s rights and opportunities in Afghanistan. While NATO can support partners to increase the participation of women in their countries, it is up to the countries to decide what kind of assistance they want. Some—like Iraq—have not opted for this type of assistance; a choice that  hinders their security efforts. NATO and its allies should do more to encourage partners to recognize that investing in women’s participation will advance stability. 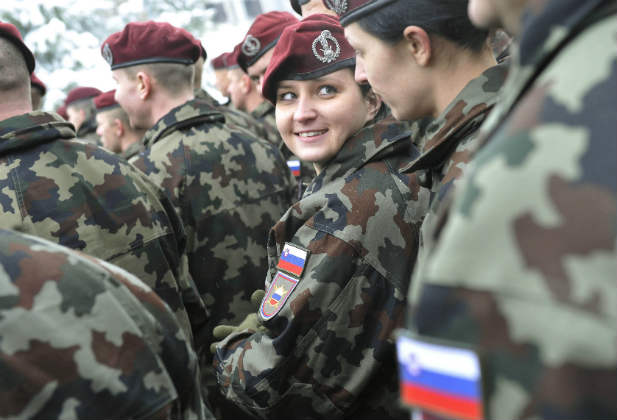 A female member of the NATO KFOR Joint Enterprise for Kosovo in February 11, 2010. REUTERS/Srdjan Zivulovic

Although gaps remain in women’s representation across the institution, it is significant that women now hold senior positions; in many cases, for the first time. Of note are the next NATO Deputy Secretary General (U.S. Undersecretary of State Rose Gottemoeller), the head of Allied Joint Force Command in Naples (U.S. Navy Admiral Michelle Howard), and the commander at NATO Headquarters in Sarajevo (U.S. Army Brig. Gen. Giselle Wilz). Washington’s nominations set a strong example for other NATO capitals. When it is seen as a NATO standard to encourage equal opportunities for women, countries take notice—especially those trying to join the Alliance.

Leaders also reiterated the importance of gender expertise by recognizing it as a military capability. If countries are to deliver on NATO’s commitments to encourage the participation of women in preventing and resolving conflict, NATO must train national militaries on what this means in practice—on the strategic, operational, and tactical levels.

NATO has taken important steps to do just that, and to expand the number of officials its training reaches. It provides a core resource—the Gender Education and Training Package—that schools can draw upon to train officials on how to integrate a gender perspective in military operations. Training for any official before his or her deployment must address gender. And NATO’s primary school for operational-level training made an online gender module a prerequisite for all courses, thereby reaching staff and providing training on issues from joint planning to logistics to communications. This sends a powerful message that understanding gender perspectives is relevant—and mission critical—to everyone.

In Warsaw, countries also committed to invest in building their military’s capacity by increasing the number of gender advisors that report directly to military leadership. Though gender advisors provide NATO the necessary tools and expertise to deliver on its commitments, many gender advisor roles currently go unfilled. The system through which countries fill these positions depends on country interest, and they do not always prioritize the gender advisor roles. An exception is in Afghanistan, where countries followed through on their commitments to Afghan women’s rights by fully staffing gender advisor positions in the new Resolute Support mission. This is laudable, and should be the case across the Alliance.

How America’s Credibility Gap Hurts the Defense of Rights Abroad