For the second time this year, Paul Krugman has written a column explaining that serious studies consistently conclude that slashing global carbon dioxide emissions doesn’t need to be expensive. Also for the second time, he gives much of the credit to falling costs for renewable energy, particularly solar power. He’s absolutely correct on the broader point – but dead wrong in explaining why the studies come to that conclusion.

Back in April, Krugman rightly pointed out that an IPCC review had concluded that slashing emissions might reduce annual GDP growth by as little as 0.06 percentage points. In today’s column, he cites a new report from the New Climate Economy (NCE) Project to reasonably suggest that, once public health co-benefits are considered, substantial emissions cuts might come close to paying for themselves.

No problems so far. In each case, though, he offers a similar observation about why the numbers come out so small. Here he is in April:

“What’s behind this economic optimism? To a large extent, it reflects a technological revolution many people don’t know about, the incredible recent decline in the cost of renewable energy, solar power in particular.”

“The economics of climate protection look even better now than they did a few years ago. On one side, there has been dramatic progress in renewable energy technology, with the costs of solar power, in particular, plunging, down by half just since 2010.”

(The other side is the co-benefits.)

If you read the IPCC and NCE reports, though, you’ll know that their optimistic cost estimates have little to do with cheap solar.

Take a look first at the IPCC report. The 0.06 percentage point figure is for a set of “default technology assumptions” that include availability of nuclear power, carbon capture and sequestration (CCS), and other tools. The plot below (from the IPCC report) shows what happens to the model projections when you rule out CCS and still try to hit an ambitious two-degree temperature goal: the median model that doesn’t crash projects that costs rise by about 140 percent. (Most of the models the IPCC uses can’t even find a pathway – at any cost – that hits the temperature goal once you rule out CCS.) Something similar happens when you rule out abundant bioenergy. In contrast, if you rule out abundant wind and solar, the median model shows increased costs of only a few percent, and the most pessimistic one projects only a 25 percent cost rise. The take-away is that the low cost projections are being driven far more by abundant CCS and bioenergy than by cheap wind or solar. 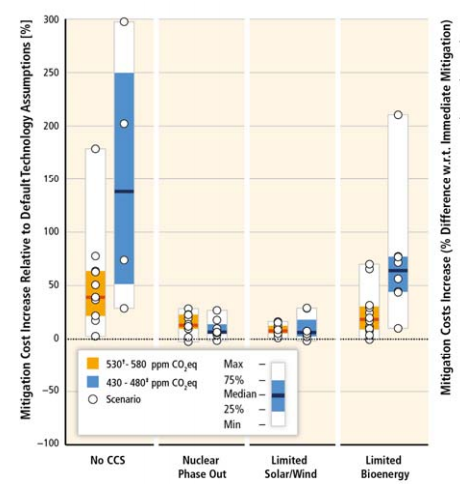 How about the NCE study? The plot below is the critical one from that report. Only 30 percent of the opportunities identified come from energy shifts of any sort at all. (Opportunities in land use in particular are claimed to be much larger.) Out of that slice, less than half comes from renewable power, dominated by wind rather than solar. (Exact numbers will need to wait until NCE publishes its appendices.) Nuclear and CCS play a substantial role; energy efficiency plays a massive one as well. 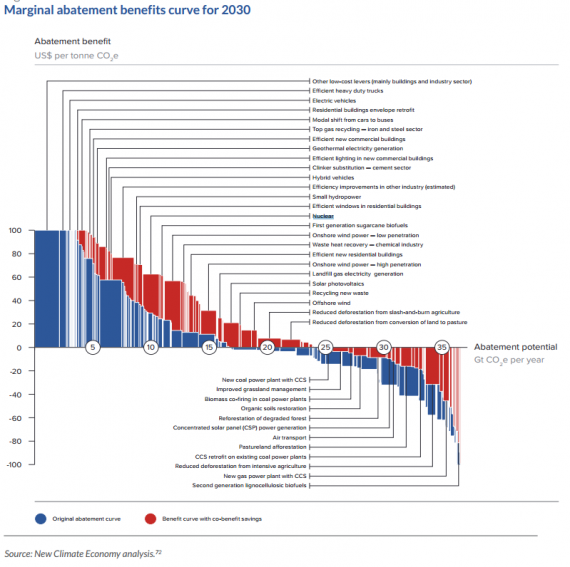 Why does any of this matter? Krugman does an important service by rebutting those on both the right and the left who claim that serious climate action requires turning our economic system upside down. (It’s a good guess that this Wednesday column from Mark Bittman, which basically called for the end of capitalism in order to deal with climate change, provoked Krugman to write his latest.) But the sorts of policies you pursue if you think that serious climate action is mostly about wind and solar are fundamentally different from those you pursue if you believe otherwise. A central upshot is that if the modeling exercises that Krugman touts are correct, and countries pursue policies based on a belief in wind and solar, the actual costs of cutting emissions will be far higher than what Krugman claims. At the same time, if the modeling exercises Krugman highlights are wrong, he hasn’t given us particularly strong reason to believe that steep emissions cuts would be cheap.

It may well be the case that falling costs for renewable energy will make cutting greenhouse gas emissions cheap. There’d be no problem if Krugman cited serious analysis that connected falling renewables costs to low estimates for the costs of serious climate policy. We can get ourselves into trouble, though, when we use estimates of the cost for one type of policy to encourage another.

The Impact of Oil Exports Is Being Greatly Exaggerated

The Case for Ecological Realism