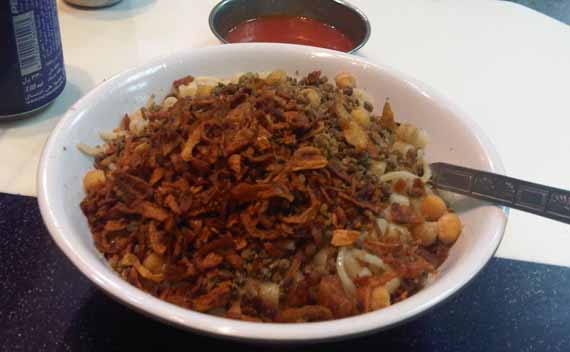 Cairo - It used to be that Egypt did big things based on big ideas. The Aswan High Dam, unity with Syria, Nasserism, the Crossing (of the Suez Canal), infitah, and peace with Israel, to name just a few. Some of these initiatives were better than others, of course, but they were all done to capture the imagination of the average Egyptian—to embed in his/her mind that the regime could not only deliver, but also that its practices matched its principles. This, in turn, would infuse the political system with legitimacy.

I am posting from Cairo (see above picture for last night’s dinner), and, to state the abundantly obvious, the era of big ideas is over and it has been for some time. Lacking legitimacy, the defenders of the regime do not seem to care whether they enjoy widespread public support. Rather, the leadership seems interested in appealing only to a relatively small, but powerful constituency for autocracy—the military, security services, regime-affiliated intellectuals, certain members of the press, the bureaucracy, and big business. I used to think that the regime elicited the support of these groups through patronage, weapons, contracts, and access to name just a few. I wasn’t wrong, but the relationship is more complicated than just delivering goodies. The regime’s supporters need a narrative to help them make sense of their world.

This narrative can’t be based on outright lies, however. There are creepy things about Egypt, but we aren’t talking about North Korea, after all. So instead of lies you get truthiness: “Egypt is an emerging democracy with 24 legal political parties and 250 newspapers and magazines. The fact that people are asking questions about succession is indicative of how far the leadership is willing to go to reform Egypt. The development of democracy will take a long time; things are not perfect, but Egypt’s come a long way in the last 10 years. President Hosni Mubarak is a transitional figure.” With the exception of the last one, each of these statements contains an element of truth even though they hardly tell the whole story. Still, it seems to be enough for the regime’s constituents. What does it matter really when one’s profits are up 30 percent a year or your ministry’s share of the state budget grows bigger or those shiny new F-16s arrive or you get to be a media personality?

From the perspective of Egypt’s leaders who harbor nothing but disdain for their own people, these circumstances may be all for the better. No need to take into account demands from below, when you can satisfy the wishes of a small group of powerbrokers. Yet how long can that last? There are hints that as the country is in suspended animation waiting for “it” to happen: fissures and divisions among the elite are beginning to develop. This may be typical political struggles as one era comes to an end, but without a clear successor or well-developed political institutions, truthiness may not be enough to keep the authoritarian coalition going.