On Monday, the five permanent members (P5) of the UN Security Council reaffirmed their promise not to attack Mongolia with nuclear weapons. In 1995, each of the P5 pledged not to use nuclear weapons against nonnuclear weapons states that signed and ratified the Nuclear Non-Proliferation Treaty (NPT); this was solidified when the Security Council voted 15-0 to pass Resolution 984.  In October 2000, the P5 specifically extended this “negative security assurance” to Mongolia when it declared its nuclear weapons-free status.

According to the latest Military Balance, Mongolia has a defense budget of $38 million and an active-duty military comprising 8,900 army, 800 air force, and 800 construction troops. As the CIA notes, “There is no navy.” In what passes for arms control, the P5—who collectively maintain over 97 percent of nuclear weapons worldwide—have vowed not to use their arsenal against Mongolia. Meanwhile, P5 efforts “to pursue negotiations in good faith on effective measures relating to cessation of the nuclear arms race at an early date and to nuclear disarmament”—as pledged thirty years ago in Article VI of the NPT—remain stalled. Instead of reassuring Mongolia, the P5 should focus on reducing their own nuclear arsenals.

To learn more about the world’s nuclear powers, the Federation of the American Scientists maintains this useful chart, which draws on data provided by the Bulletin of the Atomic Scientists’ Nuclear Notebook and Stockholm International Peace Research’s Yearbook. 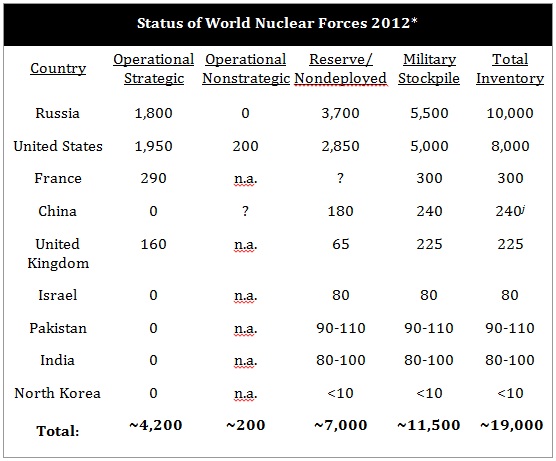 Pundits Whiff on the Middle East

The False Promise of Peace in Afghanistan