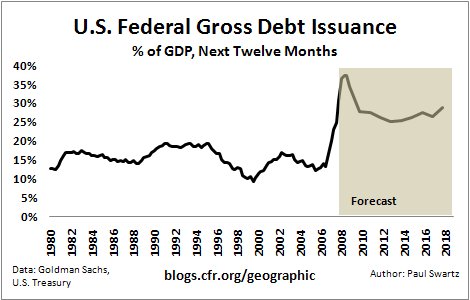 This chart shows the U.S. federal gross debt issuance, the sum of debt refinancing and fiscal deficits, as a percentage of GDP. The U.S. Treasury must issue debt to finance expenditures in excess of receipts as well as to pay off debts that are due. Although it is often assumed that debtholders will recycle their capital into new debt, they have no obligation to do so. Concerns about the level of federal debt and the size of future deficits may make creditors reconsider their investment choices. If many creditors opt out of the U.S. treasury market as their bonds mature, the U.S. Treasury may have a difficult time finding buyers for the unprecedented level of issuance. This would create a complicated trade-off for the Federal Reserve between higher interest rates, which may smother a budding recovery, and monetizing the debt, which may stoke inflation and pose a serious risk to the dollar.

Krugman: Till Debt Does Its Part