Even as terrorist groups throughout the world have engaged in more kidnappings for ransom to finance their operations, Pentagon officials have worried that the success in killing Osama bin Laden and a movie like “Captain Phillips,” which depicted the capture and killing of Somali pirates, have placed unrealistic expectations on the American authorities.

“The United States of America doesn’t have the capacity, the capability to go rescue every kidnapped person around the world,” Gen. Mark A. Welsh III, the Air Force chief of staff, said in an interview this week.

(3PA: One can already identify an emerging civilian-military disconnect about the proper use of military tools in response to the kidnappings in Nigeria. Civilians pushing for a greater commitment of personnel and capabilities to Nigeria, while the military, which certainly wants to avoid the direct intervention of ground forces, warns about the potential costs and downsides of doing this.)

Doug Cameron, “Can the Pentagon Save Earth from Space Junk,” Wall Street Journal, May 15, 2014.

The Pentagon later this month plans to award a contract for the first phase of its $6 billion project dubbed the Space Fence, a radar system that would track more of the fast-growing field of debris in space that threatens to disable or destroy satellites and manned spacecraft. Lockheed Martin Corp.  and Raytheon Co. are competing for a contract to build a powerful radar system intended to quintuple the amount of space junk the U.S. can monitor, and enable officials to warn satellite operators to move their spacecraft before possible collisions.

(3PA: In my new memo, “Dangerous Space Incidents,” I discuss the threat of space debris and the specific need to upgrade the space fence.)

WHO’s annual statistics report shows that low-income countries have made the greatest progress, with an average increase in life expectancy by 9 years from 1990 to 2012.

“I have seen the raw data that suggests that there may have been, as France has suggested, a number of instances in which chlorine has been used in the conduct of war,” [John] Kerry told reporters in London.

(3PA: One day before Kerry’s remarks, Secretary of Defense Chuck Hagel, when asked about the U.S. government’s reaction to reports from France on the use of chlorine in Syria, responded: “I’m aware of the French foreign minister’s statement. We’ve not seen any evidence of the specifics of that statement.”) 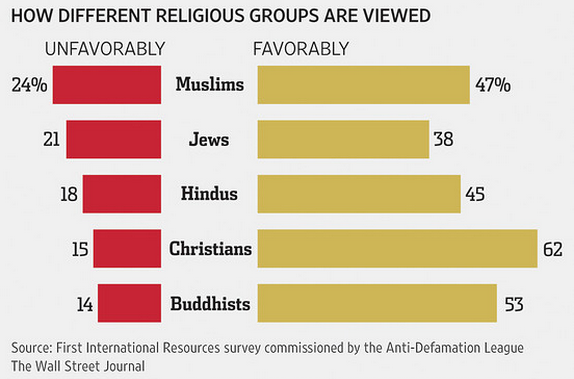 The increasing number and sophistication of unmanned aircraft operators has forced into the open a discussion that was until recently behind the blinds: How can the U.S. counter adversaries’ UAVs?

…Though no central counter-UAV organizing force exists in the U.S. military, discussion is centering on how to detect UAVs, whether to kill them and how to defeat them without breaking the bank.

On April 30 and May 1, the Army held a technical exchange on counter-unmanned air systems (CUAS) technologies. The classified meeting drew 68 packets for review, 26 of which were presented in person.

Detection, decision and defeat mechanisms at all echelons were discussed. Potential solutions ranged from kinetic and non-kinetic to electronic and cyberwarfare, according to the organizer of the exchange, Steve Bramlett, of the Army’s Aviation and Missile Research, Development and Engineering Center.

Directed energy (lasers/high-power microwave) and cybernegation alternatives were of considerable interest. The most frequently offered systems, though, were ground-based and kinetic, he says. The relatively low cost of such systems and the speed with which they can be developed, acquired and deployed are likely factors in their popularity. However, all at the meeting agreed that a combined-arms approach will be essential.

“All of our traditional kinetic air defense assets are big, expensive and set back at the brigade level,” Bramlett notes. “A small, inexpensive threat—commercially based, possibly a swarm—fielded by an enemy can run through our sophisticated, expensive kinetic assets quickly. That’s why we all realize we need combined arms and a cheaper kinetic solution at the tactical edge, battalion and below.”

The need for such systems also implies detection and decision-making at lower levels, down to the platoon level. Defeating small UAS will not only require cost-effective negation systems but new chain-of-command mechanisms.

“It’s a complicated, expensive problem,” Bramlett acknowledges. “The U.S. must negate the threat without fratricide, coalition or civilian casualty risks. The enemy doesn’t regard those problems. They’ll have cheap plentiful items and will not be concerned with positive I.D. CUAS is an asymmetric technical and financial battle.”

One might argue that U.S. leverage—and ability to push for SJS reform—would be greatest for those partners receiving high levels of FMF and spending little through FMS… However, these assumptions are not so clear, particularly in the MENA region. Table 2.1 shows that Israel, Egypt, Iraq, and Jordan dominate FMF assistance overall, as well as when accounting for population, gross domestic product (GDP), and FMF as a percentage of military expenditures. In addition to their purchases of FMF discussed above, each of these countries is critically important in advancing regional stability, counterterrorism, and other U.S. objectives, thus potentially limiting U.S. willingness to use FMF as leverage to pressure partners into SJS and political reform…In fact, no matter how FMF is considered, no country stands out as a “high FMF leverage” prospect, including those most affected by the Arab uprisings…High levels of FMF are not primarily provided to encourage reform, but rather to advance other U.S. interests in the region. (pp. 18-22) 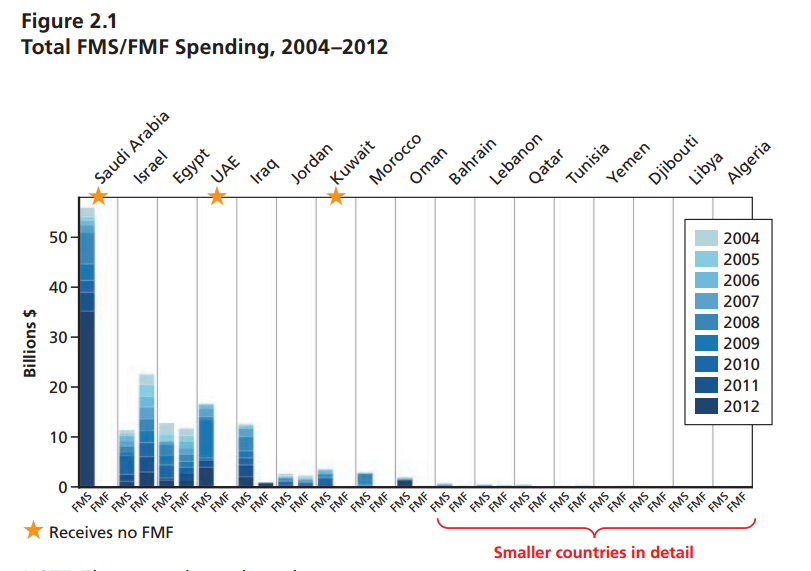 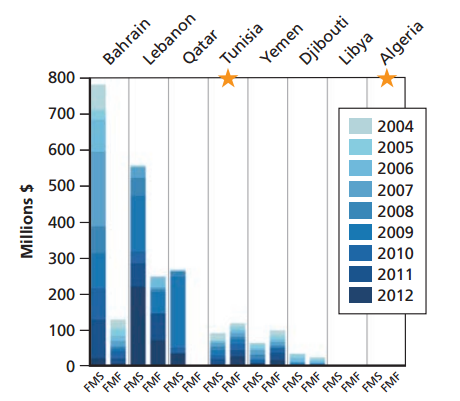 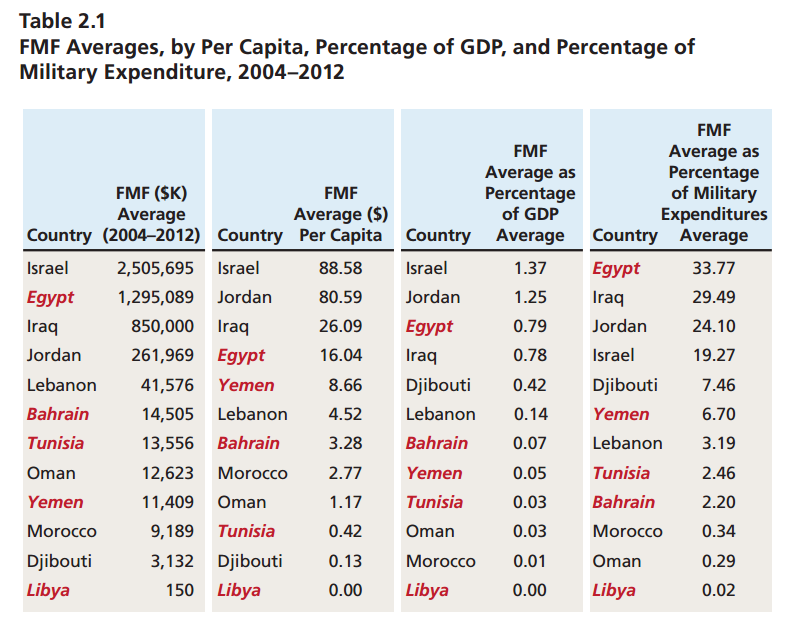 We analyze the operational effectiveness of three RPA design concepts, plus the MQ-9 as a baseline, on a “hunter-killer” mission: to find and destroy a specific moving vehicle…

First, there is no silver bullet for RPA performance in the hunter-killer mission. Even in this highly constrained example, no single RPA concept performed well on all measures under all environmental conditions.

Second, numbers can compensate for capability. In this scenario, two or three smaller RPAs with less-capable sensor packages were often able to equal or exceed the performance of the larger RPAs employed singly.

Third, the MQ-9 holds up well against the other RPA design concepts we modeled in this scenario. The MQ-9 was never dramatically outperformed and never fared worst on any measure. It compared favorably under most environmental conditions.

Finally, improving MQ-9 sensor capabilities may be a cost-effective option. Although we did not perform a cost-effectiveness analysis, upgrading the sensors on existing MQ-9 platforms, in particular their FMV sensor capabilities, would permit greater operational flexibility and would offer enhanced operational effectiveness for this type of hunter-killer scenario. Furthermore, if the discrete levels of magnification currently available on the Multispectral Targeting System,

Model B (MTS-B) could be replaced with a continuous zoom feature, MTS-B could be used more effectively to enable the RPA pilot and sensor operator to balance competing mission objectives. (p. xiii)

You Might Have Missed: Terrorism, Women in Nonprofits, and China