U.S. citizens overseas killed as a result of incidents of terrorism: 24 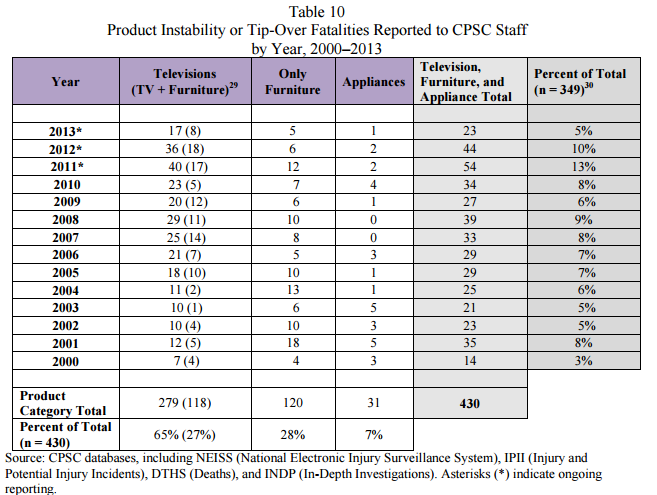 (3PA: I first pointed out in 2012 that more Americans are killed by falling furniture or televisions than terrorism. My observation was not to diminish the real—albeit relatively miniscule—threat that international terrorism poses to Americans, but to emphasize that an irrational fear of terrorism is unwarranted and a poor basis for public policy decisions. This comparison was later used by others, including humorously in a “Threat Down” segment by Stephen Colbert. So while it has generally been accurate over the past decade, the proposition is not true for the most recently reported numbers.)

Rep. Vicky Hartzler (R-MO): “Over the last nine years, twenty-four unclassified and classified reports sanctioned by the department have assessed, identified, and proposed remedies to issues within our nuclear enterprise. Yet, you still describe in your written testimony that the two most recent reviews concluded that, without interruption, issues relating to  resourcing, personnel, organization, and culture have the nuclear enterprise on a path to more frequent and greater problems that we have previously witnessed. So, what additional unacceptable events need to occur in order for the department to whole heartedly implement and sustain the recommendations in the two most recent reports on the nuclear enterprise?”

Dr. Yisroel Brumer, director of strategic, defensive and space programs, Cost Assessment and Program, Office of the Secretary of Defense: “When we started this effort, we spent a fair bit of time asking: how do we ensure this is not just the latest in a series of attempts to fix the problem, and that we’re not having these conversations again in a few years? Our assessment is that, what’s happened in the past, there were a number of reviews that made hundreds of recommendations and the services took those recommendations seriously, but implemented them with more of a ‘box-checking mentality’—‘There’s a set of things to do, I’ve done them, I can now close them out,’ rather than having an enduring focus on the mission and follow-on assessments about whether we’re having the intended affect. We are all committed to making sure that doesn’t happen this time. And that’s very much at the heart of what we’re doing. So there are recommendations from the reviews, we are tracking to make sure those were implemented.”

Triangle Center Director David Schanzer and UNC [University of North Carolina] Professor Charles Kurzman present the data supporting their research on homegrown extremism.  The key findings of this working paper are: 1) Law enforcement agencies in the United States consider anti-government violent extremists, not radicalized Muslims, to be the most prevalent threat of political violence that they face, 2) they perceive violent extremism to be a much more severe threat nationally than the threat of violent extremism in their own jurisdictions, and 3) a large majority of law enforcement agencies rank the threat of all forms of violent extremism in their own jurisdictions as moderate or lower (3 or less on a 1-5 scale).

Officials say that since August, Predator and Reaper drones have conducted 3,300 sorties and 875 missile and bomb strikes in Iraq against the Islamic State.