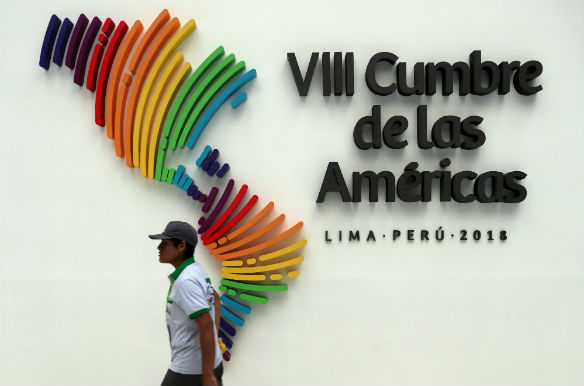 The eighth Summit of the Americas, which recently took place in Lima, will soon be forgotten. To many observers, that would be considered a success. Expectations prior to the gathering of thirty-three heads of state from the Western Hemisphere had been so low that an uneventful summit was the best possible outcome. When President Donald J. Trump announced that he would not attend—making him the first U.S. president to miss a Summit of the Americas—many Latin American diplomats felt relieved, as they had been worried that he would use the meeting to emphasize his administration’s anti-immigrant stance.

Though the weeks before the summit should have been an opportunity for policymakers and scholars to share their ideas about the future of the region, the sentiment overall was one of pessimism, ridicule, and despair. The unusual combination of an unpredictable government in the United States, a weak Brazil, and a series of lame-duck presidents in Brazil, Colombia, Mexico, and Paraguay made the 2018 Summit of the Americas a difficult moment to debate how best to address the region’s most urgent challenges. This led several observers to argue that the summit should have been postponed, a proposal rejected by Peru’s new president, Martin Vizcarra. Ahead of the meeting, foreign ministries focused largely on using the summit to solve bilateral issues on the sidelines, seeing little space for addressing problems that would require multilateral action.

None of this can conceal the fact that the profoundly uninspiring summit in Lima should be seen as a wasted opportunity of epic proportions, given that national governments across the Americas will not be able to solve many of the urgent domestic challenges they face without adopting a region-wide approach. While past Summits of the Americas are often remembered for the disagreements voiced, it is undeniable that they have provided useful opportunities for the Western Hemisphere’s heads of government to advance debates on trade, democracy, and thorny issues such as U.S.-Cuba relations.

For example, no Brazilian government can improve public security in the city of Rio de Janeiro without both improving border security in cooperation with neighboring countries and cooperating regionally to combat organized crime. Similarly, refugee crises, such as the one at the border between Colombia and Venezuela, cannot be addressed without functioning regional mechanisms to defend democracy—indeed, Venezuela’s entirely predictable and largely preventable political collapse symbolizes just how ineffective such mechanisms have been. Governments will struggle to reduce corruption if they don’t share best practices and establish platforms by which public prosecutors, judges, and law schools can strengthen cooperation and set up regional rules and norms that would increase the cost of backsliding.

In a less politically complicated scenario, the 2018 summit could have advanced several important debates. At future summits, discussions should focus on four regional issues: migration, organized crime and drug trafficking, corruption, and stopping a humanitarian catastrophe in Venezuela. Of these, only the fight against corruption and, to a very limited extent, the situation in Venezuela were covered at this summit.

The crisis in Venezuela also drives growing migratory flows, with Colombia bearing the greatest burden—it now hosts nearly one million migrants. To a lesser degree, Argentina, Brazil, Chile, and the United States are absorbing Venezuelans fleeing hunger and violence. To address this challenge, which is likely to worsen as the Venezuelan crisis continues, countries should first create a regional fund to address migration challenges and set up regular meetings between the hemisphere’s foreign ministers to coordinate efforts.

Drug-related violence is perhaps the single greatest destabilizing factor in Latin America, causing tens of thousands of deaths each year. It profoundly reduces the capacity of governments across the continent to protect human rights, promote development, and provide public services. Half of Brazil’s more than sixty thousand annual homicides are linked to the drug industry. Despite great efforts by policymakers in the so-called War on Drugs, the global market for narcotics continues to thrive.

The consumption, as well as the quality of narcotics such as cocaine, has never been so high, and no government attempts to disrupt the drug trade have had a lasting impact on prices. Governments in the Americas fail to adopt useful policies partly because they do not realize that drug cartels are, above all, sophisticated international corporations that operate just like many of their peers that trade legal goods. Drug cartels have franchise systems, pay royalties, and hire public relations firms, lawyers, and political risk analysts.

Many public policies aimed at addressing the problem end up helping drug cartels. Paradoxically, drug lords usually prefer tough laws that involve prison sentences even for those who commit minor drug offenses. After all, due to the frequent difficulties recruiting young talent (more than ten thousand are killed each year and need to be replaced quickly), high prison populations offer a rich pool of applicants who have few other employment options.

Additionally, the domestic antidrug policies of major regional players are not aligned. Recent trends toward decriminalization in several U.S. states, as well as in Uruguay, are important steps in the right direction, but these contrast with more conservative strategies in countries such as Brazil. This lack of coordination shows precisely why a summit could be so helpful to promote regional coordination. The only way to achieve more sensible policies is to establish regional norms: forward-looking policymakers can use these to achieve meaningful change on the national level.

The summit’s only positive legacy is its focus on fighting corruption, and the final declarations [PDF] include a series of important ideas on strengthening regional cooperation. Indeed, Latin American governments should make combating corruption a centerpiece of their foreign policies by helping public prosecutors, anti-corruption task forces of the federal police, and judges gain their own institutionalized platforms and channels of communication. Creating joint task forces facilitates information-sharing and specialized training, particularly in countries where these structures are underdeveloped or not politically independent. In the case of the investigation into construction giant Odebrecht, known as Lava Jato—which focuses on bribes paid by the company in exchange for government contracts—this is already happening. Peruvian public prosecutors are in close contact with the corruption investigation team in Curitiba, Brazil.

Governments should incentivize the creation of regional networks of law schools that train lawyers, public prosecutors, legislators, journalists, and activists. These groups should, in turn, use aspects of Lava Jato, including plea bargains, and Brazil’s freedom of information law as case studies of how corruption investigations can be initiated and strengthened elsewhere.

Leaders should also discuss how companies such as Odebrecht have recently attempted to embrace tougher compliance requirements and have created specific anticorruption departments. (Odebrecht eliminated its mundane-sounding “structured operations” division, through which executives made bribery payments.) Debates should also analyze the root causes of corruption, such as, in Brazil’s case, an excessive number of political parties and high costs of campaigning.

The anticorruption agenda should become a centerpiece of existing institutional setups, as well as become a priority during meetings such as the Summit of the Americas. Only then will the region fully institutionalize the integration of anticorruption measures into everyday foreign policy-making. National governments should employ peer pressure to adopt more ambitious anticorruption legislation, which should be reviewed periodically.

Stopping A Humanitarian Catastrophe in Venezuela

Despite growing consensus across the region that Venezuela is no longer a democracy and a growing willingness to increase diplomatic pressure against Caracas, governments from Bogota to Buenos Aires are currently too distracted to prioritize the crisis in Venezuela. This is particularly true for Brazil, which is unlikely to reassert its leading role in the region until a new president takes office in 2019. Despite its strong language, the summit’s concluding declaration reveals that the region is currently unable to reach consensus—fewer than half of the hemisphere’s countries signed the document.

Failure to act decisively with regard to Venezuela has seriously eroded Latin American nations’ credibility as promoters of democracy and upholding human rights. Moreover, it has tainted the reputation of the Organization of American States (OAS), which should have put pressure on Caracas long before Luis Almagro became the bloc’s secretary-general and started to take the initiative, in 2015. The crisis may have fatally wounded organizations, such as the Union of South American Nations, that were purportedly created to manage regional problems more efficiently.

As governments in South America have failed to play a constructive role, their economic influence in Venezuela has declined to the benefit of extra-regional powers. Today, the four most influential actors in Venezuela are China, Cuba, Russia, and the United States. Previous diplomatic attempts to restart dialogue with Venezuela failed because they did not recognize Beijing’s central role as the largest and most committed financial supporter of Venezuelan President Nicolas Maduro. China can no longer be left out of the search for solutions to Venezuela’s profound political and humanitarian crisis.

Last year, the United States adopted economic sanctions that aim to hurt the Venezuelan economy. Those, however, who hope for tougher U.S. action, such as an oil embargo, overlook possible counterintuitive effects. Supporters of such a move argue that the havoc caused by broad sanctions would quickly lead to Maduro’s ouster, setting the stage for a return to democracy. Yet with the Venezuelan government desperately in need of foreign culprits for the country’s economic woes, a U.S. oil embargo would provide the ideal scapegoat for Maduro.

Given their failure to defend democracy in Venezuela, governments in the region should focus on what is most urgent: to pressure the Maduro government to accept foreign humanitarian aid, particularly medicine and food supplies, to help those who need it most. At the same time, the failure to help prevent the crisis in Venezuela should lead to some soul-searching in the region on how to prevent such crises in the future.

Despite some progress vis-à-vis the fight against corruption, the 2018 Summit of the Americas will go down in history as a lost opportunity. As several of the Hemisphere’s largest countries, including Brazil, Colombia, and Mexico, transition to new leadership, they should promote a broader debate with their neighbors about the future of the Americas.  More sophisticated regional cooperation in the realms of migration, surging violence and crime, drug trafficking, and democracy will be crucial to help nations across the Western Hemisphere overcome the many domestic challenges they face.