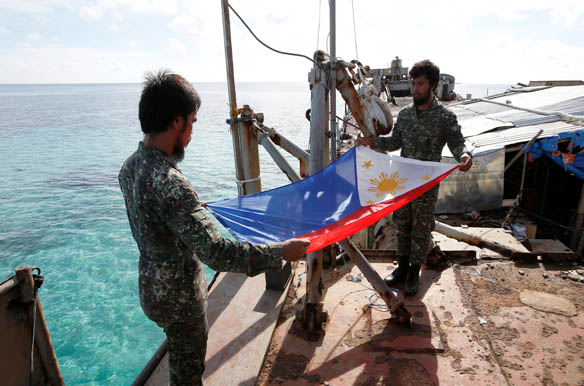 Last month’s ruling by a tribunal at the Permanent Court of Arbitration (PCA) on the dispute brought by the Philippines against China has earned its place in maritime legal annals. Its precedent is likely to be felt beyond the South China Sea, but whether it will influence China is open to question.

Unlike previous territorial disputes put before the International Tribunal for the Law of the Sea or International Court of Justice in The Hague, this tribunal did not adjudicate on sovereignty. That would have required both parties’ agreement. Furthermore, China’s reservations after ratification of the United Nations Convention on the Law of the Sea (UNCLOS) against compulsory dispute settlement under the Convention being binding effectively precluded such a direct approach. The Philippines was able to seek arbitration by focusing its case on the legal status of disputed maritime features, rather than a determination on who owns what. On these more limited terms, the Philippines obtained a sweeping victory, with the panel finding unanimously in its favor on almost all fifteen submissions.

The panel found that China’s claims of historic rights within the nine-dash line, which Beijing uses to demarcate its claims in the South China Sea, were without legal foundation. The panel also concluded that Beijing’s activities within the Philippines’ two-hundred-nautical-mile exclusive economic zone (EEZ), such as illegal fishing and environmentally ruinous artificial island construction, infringed on Manila’s sovereign rights.

No Islands in the Spratlys

While these aspects of the ruling garnered headlines, the boldest implications flow from the judges’ opinion that none of the maritime features in the Spratly Islands are entitled to maritime zones beyond twelve nautical miles. UNCLOS accords the full suite of maritime jurisdiction privileges (territorial sea, EEZ, and continental shelf rights) to islands. Rocks, however, are only entitled to twelve nautical miles of territorial sea, and freestanding low-tide elevations have no jurisdictional entitlement at all.

The tribunal ruled that the Spratly Islands are not islands in the legal sense, but rather, rocks or low-tide elevations. This includes the aptly named Mischief Reef, a submerged feature that China has occupied since 1995; it is one of seven features upon which Beijing has heaped thousands of tons of sand and concrete since the case was lodged in 2013. Although Mischief Reef now accommodates a military-grade runway and port facilities, the ruling is unambiguous that it falls within the Philippine EEZ. This means China is in a state of unlawful occupation.

The implications of the ruling are less clear for Scarborough Shoal, an isolated feature several hundred miles northeast of the Spratly Islands that is much closer to Manila. It was declared a rock above water at high-tide and therefore entitled to a territorial sea. Based on the tribunal’s ruling, the shoal is wholly within the Philippines EEZ. While it is unoccupied, it has been under de facto Chinese control since 2012, a highly unusual situation.

Vietnam and other Southeast Asian countries were not parties to the arbitration, but their sovereign EEZ rights in the South China Sea have been bolstered by the ruling. This includes Indonesia and Malaysia, which have recently experienced aggressive encroachment into portions of their EEZs by Chinese fishing and maritime law-enforcement vessels in areas Beijing claims as traditional fishing grounds.

China can no longer justify such claims with reference to UNCLOS. This affirmation of Southeast Asian countries’ land-based maritime resource rights in the South China Sea reflects the geographical fact that their coastlines are much closer to the disputed area than China’s. Removing the Spratlys from the jurisdictional picture beyond a handful of enclaved territorial seas potentially eases the path towards a cooperative high-seas resource-sharing solution in the future. Getting there, however, will still be very difficult.

The legal picture is one thing, but strategic realities exist on a different plane.

One month on, is it possible to pass an overall verdict on this groundbreaking, island-diminishing case? It is probably too early to tell. It has always been difficult to quantify impact in the slow-burning world of international law, even though the arbitration is considered final and legally binding on China.

Realist commentators marvel at the Philippines’s pluck in attempting to level the asymmetrical playing field in the South China Sea, but are skeptical that China will bend. Where big powers are concerned, might trumps right. Without an enforcement mechanism, the tribunal’s ruling is destined to be ignored, or worse still, constitute an empty provocation to a vengeful Beijing bent on turning the South China Sea into a Chinese lake, according to this point of view.

Nonetheless, the Philippines is currently enjoying calm weather at the eye of the South China Sea storm. While China has directed invective at supporters of the tribunal ruling, including Australia, the new Philippine government of Rodrigo Duterte has been spared the worst. Thus far Manila has held its post-tribunal-ruling cards closely, avoiding the twin pitfalls of hubris or submission to China. One can even imagine the basis for a bilateral grand bargain with Beijing, including a swap of Scarborough Shoal for, say, Second Thomas Shoal. But Philippine policy under Duterte remains unpredictable, with the potential to undercut the effect of the tribunal’s ruling.

Some have questioned the importance of the ruling by suggesting that the tribunal has a lower status than that of international courts, such as the International Tribunal on the Law of the Sea. The judges have even been criticized for failing to show sufficient political sensitivity to the implications of their ruling.

International maritime lawyers, almost by definition liberal institutionalists, are more persuaded that the tribunal’s ruling could be a game changer. Some point to a record of great-power compliance with international court decisions, even in cases where the verdict was initially contested. The influence of international law in shaping norms should not be ignored. However, the impact is not always felt immediately, a point worth stressing in the age of instant analysis and event fatigue.

China issued a position paper in 2014 preemptively rejecting arbitration, so its public tantrum following the ruling was predictable. Taiwan’s negative reaction, however, is worthy of attention as a “control group” from which to gauge China’s reactions. Unlike China, Taiwan is not a party to UNCLOS, nor is it bound by the tribunal’s ruling. But the Republic of China’s 1940s-era nine-dash-line map is the precursor and mirror image of Beijing’s claims.

Taiwan’s disappointment springs from the tribunal’s rejection of island status for Itu Aba, the largest naturally formed feature in the Spratly Islands and a remote Taiwanese outpost. Taiwan’s rejection of the ruling is not surprising. Since the tribunal’s ruling does not impinge on sovereignty claims, once the disappointment of Itu Aba’s classification wears off, scope remains for Taiwan to change its position. A claim based on newly clarified maritime features in the South China Sea would allow Taipei to distinguish itself from Beijing’s dubious attachment to the nine-dash line, moving it closer to conformity with international law without having to renounce claims of sovereignty.

Beijing maintained a frosty attitude throughout the tribunal proceedings while attempting to enlist a motley coalition of supposedly supportive states. Since the ruling was released on July 12, China has shifted tack, aiming to splinter international support for the tribunal’s award.

The Association of Southeast Asian Nations (ASEAN) has borne the brunt of these wedge-driving efforts. Cambodia is widely perceived to be acting at Beijing’s behest as Southeast Asia’s chief spoiler, vetoing overt references to the tribunal’s ruling in the various communiqués from ASEAN’s recent multilateral summits. Chinese pressure appears to have borne neutralizing fruit more widely among ASEAN’s membership. Within ASEAN, apart from the Philippines itself, Vietnam alone endorsed the ruling. If Vietnamese fishermen are subjected to physical harassment, Hanoi could launch its own legal case against China, buoyed by the Philippine precedent. But it will take a significant incident to trigger such an action, such as another oil rig deployment deep into disputed waters.

China was also suspected of applying a hidden hand to water down an EU statement on the ruling. In fact, to date, no European state has backed the ruling as binding.

While Beijing has waged a war of words since the tribunal ruling was released, it didn’t immediately step up military action in the South China Sea. Although this appears to be changing, with Chinese Air Force combat patrols flying over the Spratly Islands and Scarborough Shoal and a planned joint exercise with Russia scheduled for the South China Sea in September, the epicenter of China’s maritime aggressiveness appears to have reverted for now to the East China Sea.

Recent statements from the People’s Liberation Army leadership confirm a hardening trend, something that President Xi Jinping may have instrumental reasons for supporting.

However, based on Beijing’s own post-ruling pronouncements, there is still a possibility that China will attenuate its future claims. Since the tribunal did not rule on any questions of sovereignty, Beijing could even continue to use the nine-dash line as a cartographical shorthand for its claims based on high-tide features without relinquishing its territorial claims within the Spratlys. But that depends on China living up to its vaunted long view.

Next steps in moving forward from the ruling lie squarely with China and the Philippines. Much will depend on the progress of their bilateral relations and potential negotiations.

External parties with an interest in the region, including the United States, should focus on fostering cooperation. Directing policy and capacity-building efforts toward fisheries protection and conservation in the South China Sea would be consistent with the tribunal’s findings and could draw on a broad coalition of actors, including environmental groups that have yet to show much interest in the sea. This approach likely has the best prospects for rallying wider support within ASEAN especially Indonesia, given the priority it accords to thwarting illegal fishing. This could extend to impromptu or sideline discussions at the upcoming Group of Twenty summit in Beijing, although China is widely expected to block any mention of the South China Sea in the summit's communiqués.

One month on, China’s hardline reaction and successful splintering efforts have taken off the initial shine from the Philippines’s legal triumph in The Hague. The leadership change in the Philippines has injected a wild card into the mix. However, it is too early to discount that the award will have a moderating influence on China’s claims. Hard-line statements out of China need to be scrutinized for evidence of subtle changes in the weeks and months to come.