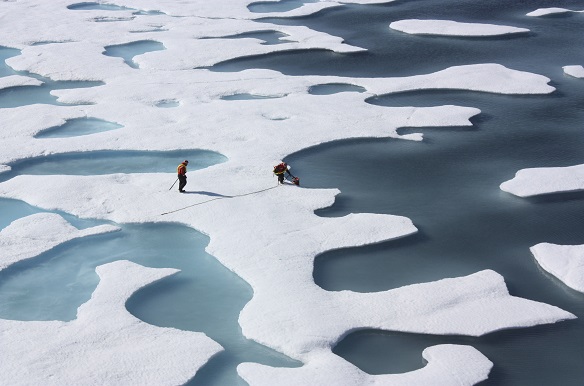 The Arctic has become a subject of greater strategic interest over the past few years, due in part to the overwhelming evidence of climate change and growing access to the region's natural resources. Scientists have long suspected that warming would be more pronounced closer to the poles, but until recently, the extent of this was unclear. According to the U.S. National Oceanic and Atmospheric Administration, "Arctic warming is causing changes to sea ice, snow cover, and the extent of permafrost in the Arctic. In the first half of 2010, air temperatures in the Arctic were 4 degrees Celsius (7 degrees Fahrenheit) warmer than the 1968 to 1996 reference period." Some scientists are even worried about the possible melting of the Greenland ice cap or the thawing of northern permafrost, which would release massive amounts of methane, the most potent greenhouse gas, and could catalyze disaster on an unprecedented scale.

The Evolving Significance of the Arctic

To many, this is a looming calamity for the earth as a whole, and particularly for indigenous Arctic peoples, whose homeland and traditional way of life are under threat. U.S. scientists fear that the iconic polar bear could face extinction in the next few decades due to a loss of ice cover.

But others are welcoming the changes. Warming in the Arctic has opened a vast treasure trove of energy resources. The United States Geological Survey estimates that about 30 percent of the world's undiscovered gas and 13 percent of the world's undiscovered oil may be found in the Arctic, mostly offshore and under less than 500 meters of water. Meanwhile, shipping companies, as well as big trading nations like Singapore, Japan and Korea, are keen to take advantage of emerging Arctic shipping lanes. Analysts believe that Russia's Northern Sea Route, in particular, has considerable potential, and is able to shave days off shipping times from Asia to Europe, depending on sea ice conditions. The Northwest Passage through the Canadian Arctic is much more problematic. Few believe that the Passage as a whole will be viable much before 2050.

A Pair of Red Herrings

By most expert accounts, Arctic governance has worked well, but two myths often cloud the debate:

Sovereignty Battles: Unlike Antarctica, the major Arctic territorial claims are settled, with the exception of the U.S.-Canada maritime border dispute in the Beaufort Sea, and competing extended continental shelf claims near the North Pole. There is a UN dispute resolution process that countries seem to trust, but, in spite of this, the domestic political games continue. For instance, the Canadian prime minister Stephen Harper recently ordered his officials— amidst guffaws—to add the North Pole to its territorial claim.

Security Risks: Throughout the Cold War, U.S. and Canadian submarines passed under the ice at will, and intercontinental bombers probed each other's airspaces. When President Barack Obama visited Canada in 2009, the Canadian defense minister announced, with alarm, that the North American Aerospace Defense Command (NORAD) had spotted two geriatric Tupolev "Bear" bombers approaching Canadian airspace. They were seen off, as they always are, by two Canadian fighter jets. While it is possible that security will once more come to the fore in the Arctic as Russia proceeds with a new expansionist foreign policy, it is not currently a major issue. But it is receiving a great deal of attention in Arctic capitals in light of the situation in Ukraine and other former Soviet republics.

The Arctic Council, which contains all eight Arctic states, was established in 1996. The council has a unique structure, with six representatives of indigenous peoples as permanent observers. Under the Swedish chairmanship (2011 to2013), China, Korea, Singapore and Japan joined seven European states as permanent observers in acknowledgement of the council's need to respond to evolving economic and shipping interests in the region. In further governance reform, the council now has a small permanent secretariat in Norway.

The council's mandate was originally environmental, but it has expanded. In particular, its agenda has included resource governance, business development, and sustainable development. The Canadians are spearheading the establishment of the Arctic Economic Council to bring together private sector interests from the region to better promote economic development.

In addition, there is an international protocol on search and rescue in the region, and an agreement for mutual assistance in cleaning up oil spills (because of the fragility of the Arctic environment, a major oil spill could make the Exxon Valdez incident look like child's play). The council has also been pressing the International Maritime Organization to develop a so-called "Polar Code," setting tough standards for ship navigation in both the Arctic and Antarctic.

The United States is scheduled to take over the chairmanship of the Arctic Council in 2015, but its involvement with the body thus far has been sporadic at best. However, it now seems more interested in the region. Secretary of State John Kerry attended the last Arctic Council ministerial meeting and announced the instatement of a new Arctic ambassador, whose appointment is still pending.

The U.S. should focus on three major issues when it chairs the Arctic Council:

Climate Change: Secretary Kerry has been referring to climate change more frequently in his speeches. There are two issues of particular interest to the Arctic: black carbon and other short-lived climate pollutants, and geoengineering of the Arctic climate.

Black carbon (or soot), which is generated by the incomplete combustion of fossil fuels and other organic material, is a very potent contributor to climate change. As it blankets snow or ice, it diminishes the reflection of sunlight, which contributes to further warming.

Black carbon is relatively easy to manage (e.g., through improved cooking stoves in India and China and better diesel engines and fuel). Controlling these could buy the world some time to address climate change more broadly. The Arctic Council has a committee examining the issue, and the United States and Canada are very active in the Climate and Clean Air Coalition, a group of countries established by former secretary of state Hillary Clinton working to slow the emissions of short-lived climate pollutants. Unlike the larger climate talks, these initiatives are making progress.

As the climate negotiating process remains bogged down, there is increasing pressure from elements in the scientific community to at least experiment with ways of altering the earth's climate. There are a number of geoengineering proposals, ranging from capturing carbon dioxide in the atmosphere to what scientists call solar radiation management. The latter would involve spraying an aerosol, such as sulphur oxide, to block some of the sun's rays.

While images of Dr. Strangelove abound, there are plenty of competent researchers who not only believe that this is possible, but that it could be cost effective, at around $3 billion a year. Indeed, most of the significant military research establishments have geoengineering programs. And it obviously has potential political appeal. While confronting climate change will be enormously expensive and likely politically dangerous, geoengineering sounds cheap and quick.

The problem is that scientists have no idea what the side effects might be, given the Arctic's significant influence on the earth's climate. And there is no international regime that governs either the experimental or full-scale implementation of solar radiation management. Because such experiments, large or small, will begin in the Arctic, this is a clear issue for Arctic governance.

Potential Resource Rush: Once the extended continental shelf claims and other remaining disputes are settled, nearly the entire region will be subject to the jurisdiction of one of the eight Arctic states. It is unlikely that any of them will accept international regulation of its activities, but there is very fruitful ground for the Arctic Council and its numerous scientific subcommittees.

Information exchange, adoption of best practices, voluntary standards and the existing cooperation on search and rescue and oil spill prevention are all necessary. Here, the promotion of voluntary cooperation among industry—similar to the Canadian Oil Sands Innovation Alliance—could provide an example. Under the agreement, most of the large players in the Athabasca oil sands agree to pool and share their intellectual property for cleaner extraction technologies. The U.S. chairing of the council comes at the ideal time to push these ideas forward, before companies make the massive investments in extraction that reduce the incentives for this sort of cooperation.

Finally, there is virtually no regulation of Arctic fishing. The waters are very rich in marine life, which will be more accessible with warming. This is one of the last virtually unexploited fisheries. Before major investments are made, there is a small window of opportunity to create a more sustainable, sensible regime.

Because of the fragility of the Arctic environment, there have been various suggestions for an international treaty to guide and limit states' actions in the Arctic, perhaps similar to that governing Antarctica. At the moment, any such treaty seems problematic. After all, as the Canadian prime minister pointed out when he plainly stated, "We live here," the Arctic already has inhabitants, unlike Antarctica, meaning that negotiations will be far more controversial. But pressures will grow as the environment continues to deteriorate and natural resources development gains pace. One severe oil spill, for example, could well change the calculations about a potential treaty. For now, however, international governance of the Arctic seems unlikely to be codified in one robust international accord.

More from the Council of Councils
A Region Divided: What Did the Summit of the Americas Accomplish?
Russia’s Invasion of Ukraine Will Have Lasting Implications
COVID-19 After Two Years: The Failure of Pandemic Governance
Drag