Council of Councils
Russia and the BRICS: Priorities of the Presidency
Global Memo by Author: Sergey Kulik, Director, Institute of Contemporary Development
Jul 07, 2015
Global Memos are briefs by the Council of Councils that gather opinions from global experts on major international developments. 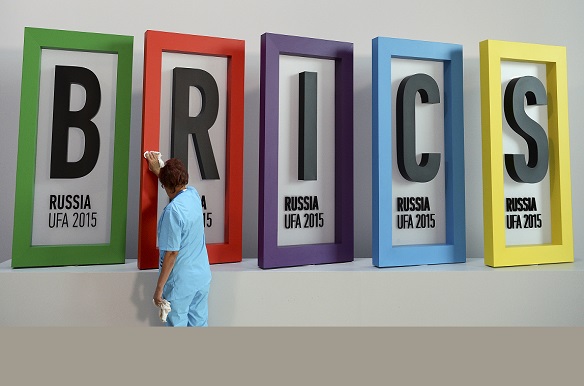 On July 8–9, Russian President Vladimir Putin will host the heads of Brazil, India, China, and South Africa at the seventh BRICS summit, in Ufa. Russia’s presidency of the BRICS, which began in May 2015, aims to pursue the following five priorities: strengthen international peace and security, facilitate multilateral financial cooperation and reform the international financial system, enhance trade and economic cooperation, expand social cooperation of the BRICS countries, deepen humanitarian interaction. Since its conception, the BRICS group has expanded its agenda beyond economic cooperation, including a greater focus on the first priority, international peace and security.

Russia is especially keen on the first three priorities, which can be grouped into two overarching goals: broadening political cooperation and strengthening the economy. As the Ukrainian crisis emerged and the Group of Eight (G8) was converted into the Group of Seven (G7), Russia’s approach expanded to include two additional features. The first is the promotion of initiatives to develop a common platform to respond to security threats that range from armed conflict to cyber warfare. The message this conveys to the world is that the BRICS bloc is united not only by common interests in social and economic development and global financial configuration, but as an alliance seeking to reform international relations. This message is officially translated in three strategic interests: strengthening international law and the centrality of the United Nations, enhancing economic cooperation among its members to boost socioeconomic development, and gradually transforming the BRICS into a coordinated body capable of tackling strategic issues, not just current global political and economic challenges.

In other words, the BRICS bloc intends to become an influential actor in global governance.

There is, of course, a big gap between reality and intentions. The BRICS bloc is still at a stage in which implementation is complicated by the different priorities and interests of its members. Further development, at least from Moscow’s perspective, is predicated on strengthening the noneconomic components of the group’s agenda.

Russia currently holds the rotating presidency of not just the BRICS, but also the Shanghai Cooperation Organization (SCO), which comprises Eurasian countries that cooperate on military, political, and economic matters. The annual SCO summit will take place in Ufa in tandem with the BRICS summit. It is quite possible that Russia will pursue the aforementioned strategic interests through the SCO by boosting its facilitation of cooperation between Moscow and Beijing, which are members of both groups, as well as with New Delhi (which is an observer in the SCO), in redesigning the global architecture. Russia is at least as enthusiastic about advancing its priorities at the SCO summit as it is at the BRICS meetings.

The second feature is Russia’s activity on the development and efficient operation of the New Development Bank (NDB) and the Contingency Reserve Arrangements (CRA). The NDB is a multilateral bank agreed to by BRICS leaders at the 2013 Durban summit. Set up as a counterweight to the Western-dominated World Bank and International Monetary Fund (IMF), the NDB aims to foster development cooperation among the five large emerging economies that comprise the BRICS bloc. At the outset Moscow was not enthusiastic about these China-driven projects, but once Russia’s membership in the G8 was suspended, it agreed to facilitate these initiatives prior to the 2014 BRICS summit in Brazil.

In Moscow there are still many proponents of economic issues taking priority on the agenda. The NDB is considered an important tool in increasing the role and the attractiveness of the BRICS in global development, as well as for the member–countries' own needs. The NDB is an attractive project for Russia because international sanctions have limited its access to funding due to Russian actions in the Crimea and eastern Ukraine. These sanctions restrict several leading Russian banks and oil firms, ban arms deals, and freeze the assets of dozens of individuals in Putin’s inner circle. But more importantly, they have created barriers for all Russian businesses seeking to borrow money from foreign financial institutions. Even banks based in countries that do not impose sanctions of their own are reluctant to deal with Russian customers. The other BRICS countries, on the other hand, have access to international financing, so Russia will find it difficult to focus their attention on its own projects.

The NDB needs at least four years to become fully operational. It will have to accumulate sufficient assets, develop and approve procedures, assess projects, and solve human resources issues, among other obstacles.

What’s more, the bank will not have the capacity to compete with the World Bank or IMF as it will have less access to long-term funding than these well-established global financial institutions. The NDB's financial leverage and access to expertise will be limited. The more realistic scenario for the bank, therefore, is to collaborate rather than compete with these existing institutions.

A recent Chinese initiative, the Asian Infrastructure Investment Bank (AIIB), could have an impact on  the NDB. Moscow denies that the AIIB’s role would overlap with that of the NDB, but it understands that both banks are China-centered and their interaction would depend to a degree on Chinese priorities. Attempts to combine these financial projects appear aimed at increasing their collective role and influence in the global financial system vis-à-vis the IMF and World Bank. (Their concerns include reconsidering the country quotas—the amount a country pays to the IMF or World Bank, which in turn determines its voting power—in these organizations).

The BRICS members are embarking on ambitious projects to transform the existing state of global affairs and facilitate their own social and economic development. Their successes and failures of the Russia’s priorities will influence the changing BRICS agenda. For example, the not-so-rosy economic prospects of some states are seen as an additional reason to strengthen the bloc's noneconomic priorities and thus show the benefits of the BRICS group as a responsible actor in global affairs. For example, Russia's GDP will contract by some 2.5 to 3 percent in 2015, with a further reduction or zero growth expected in 2016. Though Russian officials hope for an upward trend, current numbers are gloomier than even the Russian government had expected a year ago. More pessimistic prospects for the future concern investment opportunities, including foreign direct investment flows to Russia and capital flows out.

The future of the BRICS will be influenced by closer Russia-China relations, especially Russia’s readiness to make new compromises with China. This, however, alongside Russia's anti-Western shift, which is met cautiously by some BRICS countries, could result in growing discrepancies among BRICS countries and, in turn, negatively influence the bloc's stated ambition of an enlarged BRICS role in global governance.

These ambitions are related to the strengthening of the BRICS voice within the Group of Twenty (G20). But it is important to ensure that this will not create barriers for the G20's work. It is equally important that the G20 maintain Russia as an equal partner in the group.

The G20 is likely to strengthen global coordination, balance exchange-rate volatility, and act against asset volatility. Considering the BRICS countries' vulnerability to external financial risks, these changes will reinforce the economic component of the BRICS bloc's agenda.

So far, the BRICS group has lacked an explicit global identity. Its creation was, rather, motivated by dissatisfaction with existing international rules. Yet the global landscape is shifting, with the rise of China (even Russian advocates of BRICS admit China is emerging as a global leader) and Moscow’s painful new reality, including its turn to the western Pacific and strained relations with the West.

The BRICS group's main efforts in the near future will still be restricted to improving its members’ interactions, developing organizational foundations, and involving experts to outline a more comprehensive vision of the BRICS tasks and their feasibility (the latter being the area with obvious gaps) more extensively. It will not be an easy endeavor, given the distinct economies, political preferences, relations with developed countries, institutions, and values within the group.

Moscow insists that BRICS members have already found common ground in strengthening sovereignty and institutionalizing this "club" to influence the international agenda. Russia considers the bloc's aims of strengthening the UN and international law as a major strength. Another achievement in the Kremlin’s view is the creation of the NDB and CRA. A third important success—one that is frequently ignored by Western analysts—is the creation of a dynamic, enlarged platform for dialogues among experts, youth, business communities, and others.

It is still unclear whether these states will come to a consensus on forming a new, robust institution at the expense of flexibility on the global stage. In its vision of such an institution, Moscow tried to forge an agreement to create a permanent parliamentary assembly of the BRICS. China was not, however, enthusiastic about the initiative and in June, India blocked the assembly with China’s backing.

This important experiment has yet to face a number of challenges that stand in the way of its ambitions, including those announced under the Russian presidency. The BRICS must provide a clearer joint platform about what its members are looking for, rather than just about what they oppose. Such a platform would make it easier to assess the pros and cons of the BRICS as an institution. Analysts working within the BRICS framework are still trying to find common positive and specific recommendations, but it will take time to see a comprehensive and detailed view of what the role of BRICS will be in the global landscape.

More from the Council of Councils
Russia’s Invasion of Ukraine Will Have Lasting Implications
COVID-19 After Two Years: The Failure of Pandemic Governance
Diplomacy Reset: Ten Global Summits to Watch in 2022
Drag