Skip to main content
Can the Middle East Navigate Democracy?

Following a year of upheaval in the Middle East and North Africa, the promise of the 2011 Arab uprisings appears remote. But throughout the region, the public yearning for governmental reforms remains strong, says CFR Adjunct Senior Fellow Mark P. Lagon. Major democracies must lend their support to indigenous civil society movements, argues Lagon, the incoming president of the Washington-based rights group Freedom House. 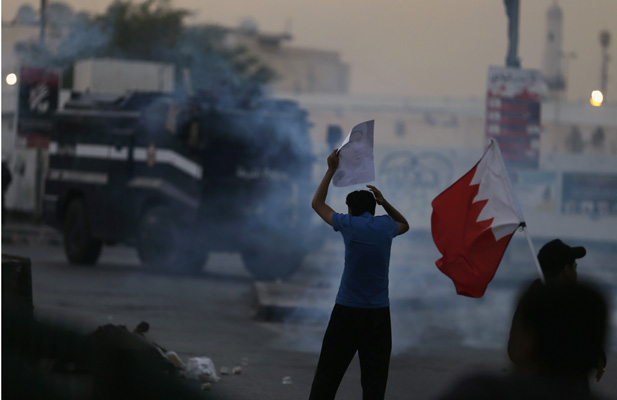 In the final weeks of 2014, we’ve seen opposing currents from states at the forefront of the Arab uprisings. Tunisia held an election that’s been considered free and fair, while in Egypt, the ousted former president Hosni Mubarak was acquitted of criminal charges. How would you assess the state of the Arab uprisings?

There’s a tendency for people to view the so-called Arab Spring and its aftermath as a miserable failure, and it’s important to remember the aspirations of people seeking a voice.

Tunisia is a reason for some hope. It’s a singular case, but with free and fair elections and what some might call a maturing electorate, a formerly ruling party is living by the rules while allowing a transfer of power.

Egypt is the other end of the spectrum. Things have gone from bad to worse. Popularly elected military rulers have been desecrating rights. Those with NGOs who have been arrested and sentenced for sedition have had their sentences extended. There is a harsh crackdown on dissent and media freedom.

Other countries that had uprisings—most notably Syria, Libya, and Yemen—now have civil wars that have both exposed the domestic cleavages and been exacerbated by rivalries among regional powers. What conflict resolution mechanisms are available?

It is not a matter of the capacity of the UN or of leading powers to take action; it is a matter of their will. It is convenient for us to point the finger at Russia and China, veto-wielding powers in the Security Council, but the United States has not shown as much leadership in Syria and Iraq as needed.

In Syria, had the United States played some role to assist less violent, more liberal elements [among]  the opposition, I think the metastasis of ISIS may not have occurred to the extent that it has.

Has Washington overlearned the lessons of recent interventions like Iraq or Libya?

Yes. The spread of democracy must not chiefly be done at the end of a bayonet. The United States not only should be leery of intervention in a full-occupation mode, but [it also] should not immediately look to assist violent opposition groups. Looking for nonviolent civil society movements should be the touchstone for U.S. foreign policy, the foreign policy of the EU, and the work of the UN.

“We have a responsibility to accompany civil society actors throughout the Middle East and North Africa who want to bring about peaceful change.”

When people rose up in Bahrain to express their critique of a monarchical, oppressive, at times corrupt government [in early 2011], it was wrongheaded to stand by and watch [the government of] Bahrain, with the help of Saudi Arabia, brutally put it down. The message has been taken by the Saudis, the sultan of Oman, and other [autocratic] Gulf countries that they have ridden out the Arab Spring and there’s no reason for them to reform.

Does Bahrain, which hosts the U.S. Navy’s Fifth Fleet, expose the limits of Washington’s leverage over its allies on matters of human rights?

Yes, in particular in the context of the United States signaling it needs these allies in a global war on terrorism, we aren’t pressuring them. So some regimes, with some degree of international legitimacy, are fairly repressive.

The most pragmatic policy for the United States would be to urge these governments to reform. Unreformed governments are brittle; they will not absorb the desires of society as a more pluralistic government would. That’s in the U.S. interest; that’s not just a matter of universal values of human rights.

Recent years have seen the role of Islam in politics contested, especially within the Sunni world. A populist version was championed by the Muslim Brotherhood before it was deposed in Egypt, but also by Turkish President Recep Tayyip Erdogan, who is consolidating power in Turkey.

Things have so markedly changed in Turkey, which was seen as this bulwark of secular democracy. It is not just Islamism that’s the problem; it is an institutionalized sexist mindset that comes from one brand of Muslim thought combined with suspicion of free expression and corruption.

We cannot expect democracy around the world to be a carbon copy of the United States’ form. That said, you can’t have a cultural relativist view where you explain away fundamental elements of democracy. Democracy is not just about elections; it’s about tolerance, pluralism, and space for minority political voices and minority groups.

“Tunisia is an example of constitutional reforms that can protect people’s voices in ways beyond elections.”

It’s possible for Islamist parties to operate in a larger context; this is why it’s important for the United States to help civil society groups help themselves. They need to be competitors to the Islamists, and maybe that will encourage the Islamists to reform, and these countries might move in the direction of a more humane treatment of different views or different genders.

Earlier this month, the Israeli parliament was dissolved following contentious debate over a “nation-state” bill that would have privileged the country’s Jewish identity over its democratic one. What are you looking for when Israelis vote in an early election this coming March?

It’s important for Israel to look at its situation in the mirror, and not just stipulate, “We’re a democracy and so therefore we can do anything.” Israel faces a threat from terrorists, [but] changes that squeeze media freedom or restrict public assembly or student protestors nibble away at the edges of democracy.

There seems to be a wellspring of support for [Prime Minister Benjamin Netanyahu’s] Likud [party] in terms of nationalism. It will be interesting to see how coalitions pull together. The bellwether for me is the former foreign minister and leader of the Kadima party, Tzipi Livni. She represents a microcosm: patriotic Israelis wondering whether fighting for Israel’s security has limits, in terms of accepting the possibility of a two-state solution.

Just before the summer’s Gaza war, rival Palestinian parties Fatah and Hamas formed a technocratic government. It seemed not to reflect much of a common platform, but rather popular frustration with division and illegitimacy. Where will that be headed in the year to come?

It would be good to see Palestinian actors who are committed to nonviolent approaches working together. The problem is that even among those actors, there are problems with corruption. The accountability of leaders in the inner circle of [Palestinian Authority president Mahmoud] Abbas has limits, and that undercuts their credibility.

If those providing assistance [to the Palestinian Authority] would offer a little tough love and use assistance to assert leverage on the Palestinian leadership, it would be for [the leadership’s] own good, their own credibility, and their own ability to be substantial, credible voices in a peace process. That kind of pressure could be brought to bear. It should be.

Counterterrorism often appears to be the overriding interest in U.S. policy in the region. But can Washington effectively address the legitimacy issues that underlie so many of these conflicts?

The problem of foreign policy is that all too often the urgent crowds out the important. The urgent appears to be grappling with ISIS in Iraq and Syria and lining up support from a coalition that’s broad and includes a number of governments that are quite autocratic. That may be urgent, but what is important is for the United States to press allies in the region to reform. Reform among those governments is good for preventing the long-term spread of terrorism, and it’s good for the universal values of freedom and pluralism.

What about the argument that U.S. credibility on democracy promotion has been squandered?

The United States has stepped on its own tie in a big way, but it has the capacity to turn things around. Democratic countries have a responsibility to help those people trying to bring democracy and human rights to their countries. They also have the responsibility to not take their initiative away from them. It’s their fight.

And when those civil society movements challenge illiberal allies?

There’s also the argument that the United States inadvertently discredits indigenous movements it seeks to bolster by lending them support.

We exaggerate the notion that the United States taints a movement. If a group wants our help, if they are committed to pluralism and dialogue, and they are not a violent group, we should give them help. If they are concerned about being tainted, then we should be understanding.

Are regional or major powers, or international organizations, taking up democracy promotion?

Freedom House just put out a report that shows Sweden was very strong in supporting democracy around the world. Poland was strong. The United States, EU, France, and Germany are not perfect, but forward leaning. But other [major democracies]—India, Indonesia, Brazil, Japan, South Africa—gave limited or minimal help. It’s essential for leading powers in the global south to play this role. It’s a tragedy when countries like Brazil, India, and South Africa—success stories in democracy—are not the ones helping out.

We should also hope that at the two ends of the arc of Muslim-majority nations, we would have a Turkey and an Indonesia who would actively be taking steps [to support democracy and human rights].

What will you be looking for in the year to come?

We should not be so pessimistic about the Arab Spring and the Middle East. It is a self-fulfilling prophecy if the West decides that the only two options are autocracies or Islamist extremism.

I’m about to become the president of Freedom House. It has a tendency to focus on downward trends in freedom and some of the worst of the worst in terms of abusive dictatorships, but we should look at some encouraging examples. Indonesia is an example of a glass that’s half full. Despite some problems with elections, it is a truly vital, democratic, Muslim-majority state. Tunisia is another example of constitutional reforms that can protect people’s voices in ways beyond elections.