Irfan Husain, a columnist for the Pakistan daily Dawn, says the next U.S. president faces the challenge of a Pakistani military reluctant to crack down on the Taliban and a splintered civilian leadership. He says the army has had a difficult time motivating troops to crush militants active in Afghanistan. "Currently the big problem with the Americans is that they don’t know who to talk to in Pakistan," Husain said, pointing to divides in the civilian coalition government as well as the military’s hold on other power centers. "It’s very difficult to find someone who can speak for the whole country."

The American presidential campaign has started. It’s clear Senator John McCain [R-AZ] will be carrying the Republican Party banner against Senator Barack Obama [D-IL], the Democratic Party candidate. In most parts of the world Obama seems to be more popular; he’s young, he’s new, and most importantly he is not from President Bush’s party. Is that view held in Pakistan?

Yes, among the public it certainly is. But the military establishment would prefer to have a Republican administration in Washington because traditionally Republican presidents have tended to favor military regimes in Pakistan, whereas Democratic administrations have pushed for political change in Pakistan. The army certainly is more comfortable dealing with men like McCain, who are more sympathetic to their perceptions of the threats around them. President Bill Clinton pushed very hard to tell President Pervez Musharraf, who carried out a military coup [in 1999], that he should open up the government and make democratic changes. So there is a difference in perception between the ordinary people and the establishment. The ordinary people are very happy with Obama. They are quite intrigued by the fact that he has this mixed Muslim parentage and that he is young and not from the white establishment.

Early on in his primary campaign Obama said that if he found out that Osama bin Laden was in Pakistan he would send American troops into Pakistan to try to get him. That caused a bit of a stir. That’s no longer a big issue here.

It’s a big issue in the media. You had some journalists protesting, but for the average person on the street, they see a very liberating possibility in Obama.

The new Pakistan prime minister, Yousaf Raza Gilani, visited Washington last month. I don’t think that trip went terribly well because it was happening at a time when there was continuing strong concern in Washington over the breakdown along the Afghanistan-Pakistan border. What is the Pakistan government going to do about this? Has the Pakistan government taken any new steps on this? 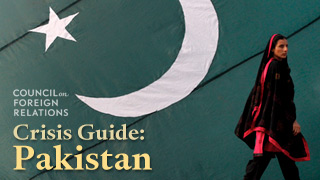 The problem with the Pakistan government, especially with the army, is our own people, especially in the tribal areas. The army has a huge problem in motivating its troops, and they don’t want to be in a situation where troops refuse to fight. There have been some instances where helicopter pilots have refused to fire because they are concerned about collateral damage. You have to be able to demonize the enemy. These people are considered Pakistani; they are not seen as villains. They are seen as people who are fighting an occupying force in Afghanistan. It’s like sending the National Guard into South Dakota to keep order. It’s not a comfortable thing for soldiers to be doing. So this is one concern. The other, of course, is that traditionally the Pakistan government, through its intelligence services, has maintained contact with the Taliban and has used them as proxies in the past. They want to have assets in place in Afghanistan because the army’s calculation is that the foreign troops will pull out of Afghanistan sooner rather than later because they are going to be tired of taking casualties there.

It’s a no-win situation in Afghanistan. It’s very hard to put that country back together. So the army’s calculation is that when [the foreign troops] pull out, they don’t want a situation where India will fill in the vacuum, because the worst thing for our military is to be encircled between India and other countries who are allied against Pakistan. So that is why they don’t want to crack down too hard on the Taliban.

It’s now been reported with some authority that the Pakistan intelligence agency, the Inter-Services Intelligence (ISI), was involved with the bombing of the Indian embassy in Kabul. It just fits the stereotype of Pakistan’s lack of cooperation with the United States, doesn’t it?

I know it does. The military doesn’t want the Indians to become too powerful. India has about a $750-million aid program going on in Afghanistan. They have now committed $450 million more. So they see that the Indians are gaining influence in Kabul and there have been lots of attacks on Indians across the country.

No matter which American candidate wins the election, clearly that is going to be a major issue, because Afghanistan is being seen as a bigger security problem to many in the United States and NATO than Iraq is. It would seem logical that the ISI would try to make a deal with the Americans that would satisfy everybody.

Logically yes, but the perception in Pakistan is that if the Americans and other NATO forces want to be around forever, it will have to be a long-haul effort. So, the calculation in military headquarters in Pakistan is that these forces won’t be around for much longer and that when they pull out, the Pakistanis don’t want to be in a situation where India takes over for them.

The Indian prime minister said the other day that relations now between Pakistan and India were as bad as they were before the 2003 [cease-fire] agreement. Is there stepped-up fighting near Kashmir again?

There were some exchanges the other day, but just yesterday [August 4] in Colombo [at the meeting of leaders of the South Asian Association for Regional Cooperation] they have agreed to continue peace efforts. Anyone can see that the greater threat to Pakistan comes from the Taliban and not from India, but you have several generations of army officers trained to look at India as the immediate enemy, and it’s very hard for them to change this mind-set. They are very uncomfortable with the notion that Pakistan would become a sort of junior partner in the subcontinent because their ideological leanings have been rooted in Islamic Pakistan being against Hindu India. And it’s very hard to change this mind-set overnight unless there is a government in Pakistan strong enough to be able to control the army.

Currently the big problem with the Americans is that they don’t know who to talk to in Pakistan. Because you’ve got this coalition, but behind the People’s Party [one of the coalition parties], is Benazir Bhutto’s husband, Asif Ali Zardari. Then you’ve got the army with Musharraf, so there are many centers of power. And it’s very difficult to find someone who can speak for the whole country.

Musharraf is keeping quiet; I mean you don’t hear anything from him.

Yesterday he accused India of fomenting the trouble that has been happening in Balochistan, where you had this low-level insurgency for the last three years of Baloch nationalists. Balochistan is the biggest problem for Pakistan, with about 45 percent of the land mass with only a small percent of the population. It’s very underdeveloped and the Balochis have long felt marginalized because their natural resources are being used but not for them. So they are very upset and there has been this insurgency that has been simmering along. Musharraf has accused India of keeping it alive.

I’m looking ahead now to next January when there will be a new president in Washington. Who will he be dealing with in Pakistan? Will it be the same prime minister?

There has been talk about some sort of change because the problem with the headstrong coalition government is that nothing is happening. There are higher food prices, and higher fuel prices. People are getting very restless. They think that since the elections were held, and now they have an elected government, they should effectively be solving their problems instead of having daily arguments with each other. The army is very reluctant to reenter politics and so far they have kept out of politics. Except if the economy slides further, then the army might almost be pulled back into the power vacuum that is created by the ineffectiveness of this coalition government.

I keep waiting for a coup.

I would think that it would be a last resort. I don’t see a coup happening immediately.