The nuclear accord reached with Iran on July 14 puts welcome limits on Iran’s uranium enrichment capabilities but does not go far enough to restrain its capabilities, says CFR President Richard N. Haass. "It is essential that people focus just as much on the challenges of the scenario in which Iran complies with the agreement as the scenario in which Iran fails to comply," Haass says. "I am more worried about the long-term consequences of Iranian compliance than I am about the short-term consequences of Iranian cheating." 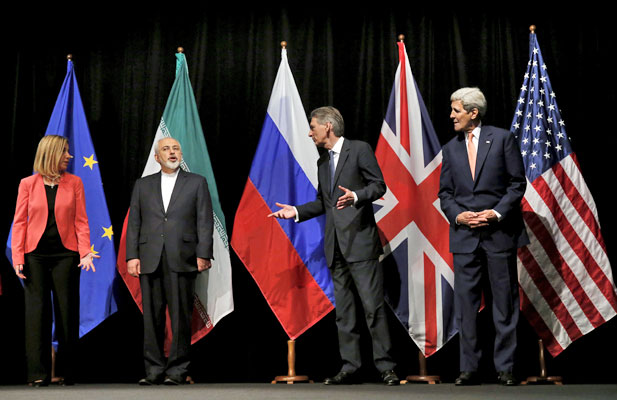 What is your impression of the agreement signed today by the United States, UK, France, Russia, China, and Germany and Iran?

Like any other negotiated agreement there are things in it that are attractive and things in it that give one pause. On the attractive side are obviously the limits on the quality and quantity of centrifuges and the significant limits on the quality and quantity of enriched uranium that Iran is allowed to keep. There seem to be arrangements for inspections. It’s not quite clear whether there’s a difference between "where and when necessary,"as the president phrased it, and "anytime, anywhere," but this is to be determined. But all in all, what the agreement appears to do is provide fifteen years in which Iran does not have nuclear weapons.

"Everyone should be careful about predicting or assuming in any way that this will lead to a moderating of Iran’s behavior towards its own citizens or toward its neighbors."

On the downside is that significant financial resources will begin to flow to Iran which they can use for any and all purposes. There is the lifting after five years of an arms embargo and after eight years of a missile embargo. Iran is allowed to keep a lot of nuclear-related capacity, so this is a far cry from what the UN and others initially said they wanted. There is the possibility of noncompliance. But to me the biggest question mark and the biggest concern I have with the agreement is perhaps, ironically, not the possibility that Iran may not comply, it’s my concern over what happens if Iran does comply.

My concern is that Iran can start prepositioning centrifuges after ten years and, after  fifteen years, enriched uranium. It could then prepare for a breakout. There is nothing in the agreement that says what Iran cannot do in ten years on centrifuges and fifteen years on enriched uranium. It simply says that the additional protocol and the nonproliferation treaty will pertain. But there are no ceilings on capability. So the real concern I have is less the strategic significance of Iranian noncompliance than the strategic significance of Iranian compliance.

You don’t think over the next ten years or so we can woo Iran into our Western bosom?

There’s clearly a hope or belief on the part of many in the administration, apparently reinforced by the Iranian foreign minister, that this agreement has the potential to do just that. To use [former U.S. diplomat] George Kennan’s term, some believe this agreement has the potential to lead to a "mellowing" of Iran. I call that wishful thinking. I can’t rule it out, I hope it’s true. But I for one don’t see it. If anything the flow of resources will work in the opposite direction. Iran believes it’s on something of a strategic roll. So I doubt that will happen. But in any event since we can’t know, I would simply say it would be a mistake to in any way defend this agreement on the basis that it will lead to a change in Iran’s character or behavior. At no point over the duration of this agreement ought we cut Iran any slack on the details of the agreement, which affects capabilities, in the hope that somehow its intentions evolve. That would be a real mistake.

I had assumed that there is such a build up of interest among the Iranian middle class that this would lead to a warming with the United States, and that once the current ayatollah passed from the scene that there would be a new opening in Iran.

I can’t say you’re wrong. And I hope you’re right. But we do have the likely succession at the ayatollah level. You have political succession in the course of this agreement. You have the powerful interest groups in Iran: clerics, the Revolutionary Guard, bazaaris, and others. You have class divisions in Iran as we saw in the so-called June [2009] revolution. So I would again think yes, it is quite possible that some elements of Iranian society in the Iranian political space will try to run with this agreement and to reintegrate Iran with the world. And I expect others will push back. I don’t think we can be confident that we know how this will play out. It is even possible in the short run that many in Iran’s leadership will need to do radical things simply to demonstrate that they haven’t somehow sold out the revolution by signing this agreement with the "Great Satan." So everyone should be careful about predicting or assuming in any way that this will lead to a moderating of Iran’s behavior towards its own citizens or toward its neighbors.

What about the United States’ relations with Israel and with its Arab friends in the region?

This agreement complicates U.S. relations both with Israel and Iran’s neighbors. Even without this agreement, rebuilding trust and confidence with Israel would be a priority. It may be impossible with this president, given his relationship with this particular prime minister of Israel [Benjamin Netanyahu]. This might be something better left to [Obama’s] successor, Republican or Democrat. But you need to reestablish strategic trust with Israel. Because it is quite possible that at various moments during this agreement there will be either real questions about Iranian behavior or simply some very tough issues in the region: the future of Jordan, stability of Syria. These are the kinds of issues that require very close U.S.-Israeli cooperation. Just as tough is going to be relations with the Sunni Arab governments who, from what I can tell, at least in the case of Saudi Arabia, seem to be more concerned with Iran than with ISIS.

I don’t necessarily share that strategic view. More broadly, discouraging several of the Arab regimes as well as Turkey from what we might call "hedging" against the Iranian nuclear program with nuclear programs of their own has got to become an American strategic priority. As bad as the Middle East is today, one can imagine a situation that is even worse: A Middle East that has multiple fingers on multiple nuclear weapons would be just that.

Could you comment on a seemingly de facto alliance between Saudi Arabia and Israel?

My own view is that it is more de facto than a real alliance. I think it’s overdrawn. I’m tempted to cite the cliché, "the enemy of your enemy can still be your enemy." Just because the Israelis and Saudis share some concerns about Iran, it is a bit of a reach that there is necessarily a major strategic overlap between the two countries.

How do you think Obama handled this whole negotiation?

I have a mixed reaction. I’ve negotiated a lot myself. So any time you are willing to sustain a difficult negotiation, that shows a lot of staying power and commitment, it is a plus. On the other hand, I’m concerned that in too many areas we compromised more than we should have. I would have earlier on established some positions and gotten the Europeans to sign onto them so they weren’t unilateral American  positions. For instance,  the duration of this agreement. I still don’t understand why we were content with a ten-year limit on centrifuges and a fifteen-year limit on enriched uranium when the Non-Proliferation Treaty is open ended. I would have said either open-ended constraints on the Iranian nuclear program or at least far longer duration constraints. And if the Iranians said no and the United States and Europe were together on that, then we would have been prepared not to have this agreement. So that’s one area. I don’t understand the relaxation of the arms embargo after five years or the missile embargo after eight. It just seems to me that a desire on our part to avoid either a totally unconstrained Iran or a war propelled us to go further than we should have on some of the compromises. There were too many areas where we seemed to split the difference rather than insist on something closer to our position.

I gather from your comments that you  regard this as a lackluster agreement?

It’s imperfect. It doesn’t solve the problem of Iran’s nuclear ambitions. At best it buys us fifteen years. It doesn’t solve the problem in any way of Iran’s regional reach. If anything it may exacerbate that because of the resources that will now flow to Iran, financial as well as physical. And it may complicate U.S. relations with Iran’s neighbors. So my own view is that this will lead to an Iran that is more capable in some ways than the current one. It certainly suggests to me that we are going to be living with the reality of Iran as a regional power for decades to come. I should add it doesn’t preclude selective cooperation with Iran. For all I know we could cooperate with Iran in Afghanistan or Iraq or even Syria one day. But  it is important to view the agreement, to judge the agreement, on its merits and not to in any way assume it will lead to a broader relationship with Tehran.

If I could come back to one point: it is essential that people focus just as much on the challenges of the scenario in which Iran complies with the agreement as the scenario in which Iran fails to comply. And I am much more worried about the former. That will pose the greatest strategic challenge. To put it bluntly, I am more worried about the long-term consequences of Iranian compliance than I am about the short-term consequences of Iranian cheating.

It is important to look at this very practically. We are now going from the world of negotiations to the world of politics, now on to congressional consideration. It’s safe to predict that both sides will now not just make their cases but overstate their cases.