Ned Parker, a veteran correspondent in Iraq, says the political situation in that country is worrying, and there is virtually no effort to bring rival Shiite and Sunni politicians together. "It is no accident that April was the bloodiest month for Iraq in five years," he says. "Politics exist in the vacuum of mistrust, and if harsh decisions are made, very quickly you go from calm into a crisis." Parker explains that things are particularly bad in Baghdad, where conditions seem as they were when the war began in 2003. By comparison, cities in the north, in Kurdistan, and south of Baghdad are faring much better. 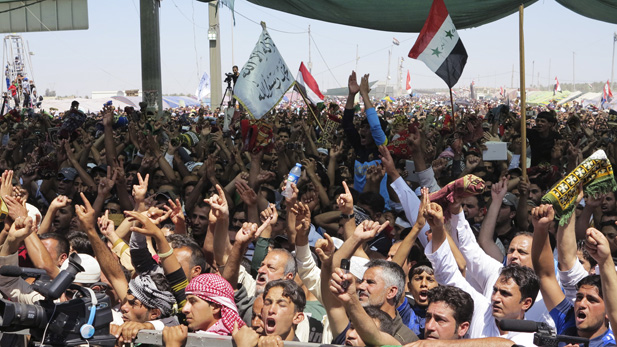 What’s the overall situation now in Iraq? You have been there for quite a while. Is it as bad as it seems from news reports?

It is bad. There is a consensus on that when you look at accounts besides the media, such as UN Special Representative to Iraq Martin Kobler, who described Iraq at a crossroads and going into the unknown. Even Prime Minister [Nuri] al-Maliki has referred to the danger of a civil war; the International Crisis Group also issued an alert describing the situation as quite serious.

It is no accident that April was the bloodiest month for Iraq in five years.

That said, it’s very unpredictable. Things look as though they are calming down slightly, but what you had was sustained fighting at the end of April in Sunni areas, after Iraqi security forces stormed a protest in northern Iraq. Among those victims were children, and that sparked outrage. Armed groups saw an opportunity. It is no accident that April was the bloodiest month for Iraq in five years, with least 712 people killed, according to the United Nations.

It’s hard to see a simple solution. Iraq’s Shiite-led government seems unable to meet the demands of Sunni protestors, and the standoff between the two sides is contributing to the country’s instability and rising sectarianism. Their demands seem irreconcilable on issues such as freeing Sunni prisoners; ending punitive measures on ex-ruling Baath party members; repealing the blanket charge of terrorism to detain people; and ending the use of secret informants to arrest and charge people. Where this leads is the question. Without solutions, do extremist groups exploit the stalemate, or does the government or protestors resort to violence?

Why can’t Maliki make peace with the Sunni political leadership so that things can calm down?

Well, that’s the issue: Today, you can make the argument that you have troops now surrounding two cities, Fallujah and Ramadi, which were a hotbed for the insurgency against the Americans and later a base for al-Qaeda. So there is a tense standoff there, and I suppose you can attribute or credit to local leaders; they have worked out an initial understanding with the Iraqi military to try to ease the situation where there are some people inside of Ramadi who killed five Iraqi soldiers last Saturday. But the problem is, whether on the local level or on the national level, there is no real consensus or trust between the sides to bring the situation under control. So politics exist in the vacuum of mistrust, and if harsh decisions are made, very quickly you go from calm into a crisis. And each crisis is worse than the last. So tentative channels can be established for communications, but without bold action, inevitably things will boil over.

Iraq just had elections, right? What were those for?

They were provincial elections, but they were only held in twelve provinces. They did not take place in the Sunni provinces of Nineveh and Anbar after Prime Minister Maliki basically made a unilateral decision and delayed them without consulting the electoral commission. They are now scheduled for mid-May. But it’s no coincidence that there has been violence and tensions in the provinces where elections were delayed.

Is the Maliki government supporting the Syrian government?

The Maliki government will say that their official position is neutral, but they’re clearly supporting Bashar al-Assad’s government. The reason for that is that the Shiite Islamists and Prime Minister Maliki fear the rise of extremists and the Muslim Brotherhood in Syria, which can potentially lead to greater attacks on Iraq, or that Sunni politicians and tribal figures in Iraq will feel more emboldened to push for things they want.

Does the United States still have much influence with Iraqi leaders?

The United States does and it doesn’t. Many Iraqi leaders look at the United States as disinterested. So while you have an embassy in Baghdad, there isn’t any real sense of concrete engagement on a higher level from the White House. But that happens, in large part, because the U.S. policy since 2009 has been how to disengage from Iraq, how to withdraw troops and wind down various funding programs. And that has been a disappointment for many Iraqis.

It looks torn apart. People who’ve been away and returned are shocked by how little it has changed since 2003. The city has been damaged from within--by the sanctions in the 1990s and then this decade of occupation and civil war. Some talk about Erbil in Kurdistan and they say, Erbil in the 1980s was a village, Baghdad was a city; and today Erbil is a city and Baghdad is just a town.

So Kurdistan in comparison is completely different?

Baghdad, even though it’s the capital, in a sense is a symbol of the war and the country’s stagnation in the post-2003 era.

Baghdad, even though it’s the capital, in a sense is a symbol of the war and the country’s stagnation in the post-2003 era. Erbil and Sulaymaniyah in Kurdistan have many flaws but it’s a part of the country that’s building, where there is something going on, where there’s much that’s new. And you also see that to a certain extent in places like Najaf or Karbala in the south. But the center of the country, Baghdad, is a shadow of its former self.

What’s happening with parliament? Does it function?

Not really. You can make an argument that nothing is functioning now regarding the government. Since December, the main secular Sunni block has boycotted almost every session because the prime minister ordered the Sunni finance minister’s bodyguards to be detained. But that might be changing now; it looks like both the parliament and the cabinet are going to return to work.

Iraq’s ties with the rest of the Arab world seem strained since they are supporting the Syrian government; they are in a minority, aren’t they?

That’s the classic dilemma of Iraqi Shiites. They are looked down upon by the Iranian Shiites and never accepted by Sunni Arabs, so they are Arab and Shiite and quite isolated.

Oil production has been going ahead, right?

Yes, it’s been going ahead. The latest figures are 3.1 million barrels per day, and it will continue to rise. The country wants to produce 4.5 million barrels per day in exports by the end of 2014. But such targets seem unrealistic. Progress in boosting production and revamping antiquated infrastructure is impeded by excessive bureaucratic controls, corruption, and security concerns. Revenues increase, but the challenge is that Iraq’s government is so corrupt and there’s no real transparency or accountability for where these revenues go. It doesn’t benefit the people. So the revenue goes up, but its stays within this mafia class associated with political parties and figures close to them.

If you’re living in Baghdad or another city, you still don’t have electricity for parts of the day?

Electricity just hasn’t improved enough. Sometimes it can be six hours a day, other times three to four. Sometimes it’s the entire city or just a neighborhood. And again, this stems from the lack of capacity and corruption that continues to be an incredible hurdle in a country that has unbelievable oil wealth.