Established in 1997, this chair is reserved for the editor of Foreign Affairs in recognition of Mr. Peterson’s extraordinary service to the Council as chairman of its Board of Directors from 1985 to 2007 and member from 1971 until his death in 2018. 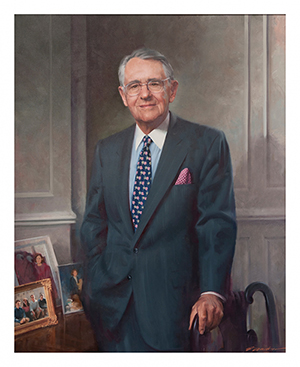 Peter G. Peterson (1926–2018) had a distinguished and far-reaching career, which spanned more than five decades and included contributions and accomplishments in public service, business, and philanthropy.

Peterson’s public service began in 1971, when President Richard M. Nixon named him assistant to the president for international economic affairs. He also served as U.S. secretary of commerce and chairman of Nixon’s National Commission on Productivity and was appointed U.S. chairman of the U.S.-Soviet Commercial Commission. From 2000 to 2004, he chaired the Federal Reserve Bank of New York.

In 2008, Peterson founded the Peter G. Peterson Foundation, a nonpartisan organization dedicated to raising awareness of the United States’ long-term fiscal challenges and promoting solutions to ensure a better economic future. He served as a director of numerous corporations and was the author of seven books, including the national bestseller Running on Empty.

Peterson was a CFR member for forty-seven years and a member of the Board of Directors for thirty-four years, during which time he helped shape and transform the Council. During his twenty-two-year tenure as Chairman of the Board—the longest in the Council’s history—he spearheaded a vigorous period of growth and renewal at CFR. His visionary leadership protected the Council’s core values—nonpartisanship, independence, and excellence—while also overseeing an expansion into a truly national organization. In recognition of his many intellectual, financial, and leadership contributions, the Council’s largest meeting spaces in New York and Washington, DC, which have hosted countless world leaders, were named in his honor, as was the chair for the editor of our flagship publication, Foreign Affairs.