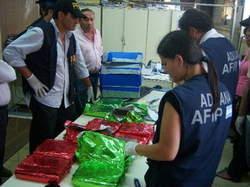 When the United States thinks about the drug war, most focus on Colombia and Mexico. Yet concerted efforts in these two countries are leading to problems elsewhere. Argentina may be the next victim.

Drugs are available throughout the country, specifically a lower-cost and highly-addictive smokable cocaine residue called paco. News articles highlight the worries of government officials and non-governmental organizations over the social costs of increased drug consumption, both in human lives and increased crime rates. But this may be just the beginning for Argentina. In response to enforcement elsewhere, Argentina is increasingly becoming a drug producing and transit country of methamphetamine in particular, also known as crystal meth or ice.

Last July Mexico outlawed imports of ephedrine and pseudoephedrine, two common cold medicine drugs that are the basis for crystal meth. In response to Mexico’s crackdown, domestic meth production in the United States rose. But the United States is not alone. Production also seems to have moved to countries with less restrictive import rules for these basic ingredients. Two weeks after Mexico’s ban, nine Mexicans and an Argentine were arrested in Buenos Aires for running a meth lab linked to the Sinaloa cartel. Since then, Argentina has experienced several violent episodes - more reminiscent of Mexico’s than Argentina’s recent past. In two separate cases, one in August and one in October, three Argentine narcotraffickers were abducted, handcuffed, and sprayed with bullets; their bodies left to be found days later.

Argentina’s entry into the drug trade has built up in recent years. Twenty-six tons of ephedrine were imported to Argentina in 2007, compared to only 5 tons in 2006. This 5-fold increase still falls below the legal annual maximum of 37 tons, meaning that there is still more potential for legally supplying the ingredients for ultimately illegal drugs. Recent regulations limit importers to registered pharmaceutical laboratories, but a November case shows the weakness of this strategy. Last month Argentine police arrested Mario Roberto Segovia in Rosario, accusing him of trafficking 9 tons of ephedrine worth $35 million dollars. Segovia had received permission from the Argentine government to import the ephedrine used to make the drugs and had recently requested permission to legally import 2.5 kilos more.

Following Segovia’s arrest and facing increased international pressure, Argentine policymakers may choose to further regulate ephedrine imports. But this is not Argentina’s only problem. Regulating cash flows will be just as important to halt the nascent illegal drug industry. Here, Argentina’s recent policy decisions are even more worrisome.

In a desperate attempt to bring cash into Argentina, the country’s Congress passed a law on December 18, 2008 that provides tax incentives for repatriated undeclared offshore funds. While the country’s basic tax rate on earnings is 35%, the plan offers a 1% rate on money that is repatriated and invested in industry, infrastructure or farming. Funds that are repatriated but invested in other sectors will pay a maximum tax rate of 8%. Argentines have about $140 billion in offshore accounts, so the government is hoping that some of those funds will return, benefiting the economy. But the law also opens a door for money laundering. Faced with increasing economic woes, it is unlikely that the Argentine government will scrutinize the history of incoming investment flows.

In effect, Argentina is offering a very attractive rate for money launderers – a mere 1 %. This can only deepen the danger for a country that’s becoming a hub of ephedrine and pseudoephedrine trafficking, and will accelerate drug related violence and corrosion of institutions.

How to Pandemic-Proof Globalization