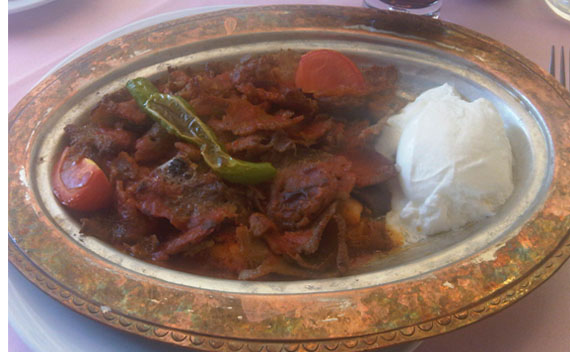 Istanbul—I arrived late last night to this stunningly beautiful city. The rain was a welcome change from choking hot Cairo. Keeping with the food theme of my first post from Egypt, the dish pictured above was today’s lunch—Iskender Kebab—a heart stopping combination of thinly sliced meat, yogurt, and grilled tomatoes and peppers all served over slice of thick crusty bread. Not for the cholestorally challenged…

There has been a lot in the news recently about Turkey’s identity. Has Turkey been “lost”? is a question that people in Washington have been asking a lot recently. The answer is no, but Ankara’s traditional relationships are changing. This has prompted me to think about the European Union—passé, I know. It’s hard to imagine, especially among Turks, Americans, and Europeans who are committed to Turkey’s EU project, but maybe, just maybe, we’ve (I include myself in this category) been wrong all along. Turkey does not need to be a member of Europe to be a fully democratic and prosperous country.

It’s long been an accepted truth in the Turkey-watching community that the EU was an anchor of Turkish political reform. The structure of Turkish politics was such that Ankara needed the incentive of EU membership to drive democratic change. Many Turks believe this as well, but after 58% of voters said “Evet” (Yes) to a series of constitutional amendments in a September 12th referendum, some commentary—by no means a consensus—began popping up here arguing that Turkey no longer needs the EU to drive its political change. The amendments, the most important of which has to do with the selection of judges to Turkey’s highest judicial bodies, raised legitimate concerns about the government’s ability to pack the courts. Yet, the perception among many is that with the changes to the constitution, the Justice and Development Party government took an important step toward a more open and democratic government that (unlike an array of reforms undertaken in 2003 and 2004) were not specifically in response to Europe’s membership criteria.

Add to Turkey’s apparent ability to undertake change on its own; falling support for EU membership—between 45-50%, which is down 30 points from 2004; a younger generation of Turks who have no vested interest in joining Europe; and imploding EU economies, in contrast to Turkey’s solid growth, it may be time to rethink Ankara’s relationship with Brussels. I am not suggesting that Turkey cut its ties to the West. Europe remains Turkey’s most important trading partner and source of foreign direct investment. Turkey could, after all, continue to harmonize its political and economic systems with the EU, but not take the ultimate step toward membership. That’s what Norway did, and it was enormously beneficial.

I know “privileged partnership” is a dirty phrase for many Turks, but if someone came up with a better name, the arrangement might work to everyone’s benefit. Any suggestions?

Turkey: The Perils and Promise of Prediction