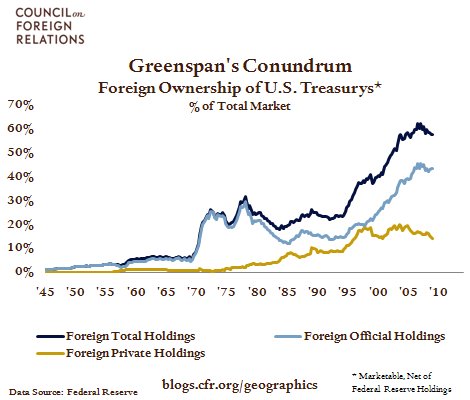 Foreign ownership of U.S. assets, particularly Treasury bonds, has increased significantly over the last two decades. Foreigners now own 57% of outstanding U.S. Treasurys, up from 37% in 1997. The chart above shows that this growth has been driven entirely by government purchases, notably China’s. In the two years ending in March 2005, official sector purchases accounted for 60% of new issuance, compared to about 40% historically back to 1960. The increasing significance of government participants, whose motivations are not always profit-driven, may help to explain Alan Greenspan’s famous “conundrum” — the question of why long-term interest rates declined in the face of strong economic conditions and rising short-term rates in late 2004 and early 2005. This disruption to the mechanism through which monetary policy normally affects the broader economy may one day work in reverse if governments choose to reduce their exposure to Treasurys back to 1960s levels. The resulting “reverse conundrum” — rising long-term interest rates in the face of weak economic conditions and falling short rates — would be far more unpleasant than the Greenspan version.

The Dangers of Debt: Russia and China’s GSE Dumping