My post over the weekend attracted a bit of attention. I thought I would clarify a few points that came up in the discussion, refine a few calculations and try to put central banks’ Agency purchases into context.

There are a couple of ways of seeing this. Compare for example the "Agency" portfolios of China, Russia and Korea (using the data released in the Treasury survey). 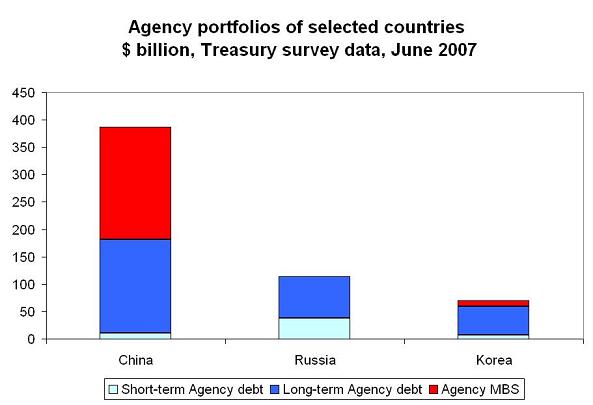 Here I want to note that my initial $155 billion estimate for Russia’s current Agency holdings is significantly higher than the $100 billion the Russian central bank claims to hold. That may reflect a reduction in the central banks’ holdings since April (the last data point), or the limits of methodology. My estimate makes two key assumptions: first, Russia’s central bank accounts for almost all of Russia’s total holdings of Agencies (i.e. private holdings are minimal) and second, almost of all of Russia’s holdings of short-term negotiable securities, CDs and other custodial liabilities are short-term Agencies. That was true in June, 2005, in June 2006 and in June, 2007 (the survey showed $38.6b of Agencies, v $42.1b in short-term custodial holdings). But it is possible that things have changed since then. I assumed that all of Russia’s 66.6b in short-term custodial holdings are in Agencies, which is a big assumption.

$100 billion, incidentally, is still a large sum relative to Russia’s GDP. Russia’s finance ministry claims that the finance ministry funds managed by the central bank -- the stabilization fund and the future fund -- do not include any Agency exposure.

There is another way of illustrating how large a role China has played in the "Agency MBS" (or pass-throughs) market: a plot showing China’s holdings relative to total official holdings and total foreign holdings. Such a chart clearly shows that China has been the main official purchaser of Agency MBS -- and Chinese demand has pushed overall foreign holdings up. In June 2007, China had $206.2b of Agency MBS -- only a bit less than the $235.8b held by the official sector. The $98.7b increase in China’s holdings from June 2006 to June 2007 accounts (I suspect) for most of the $118.1b increase in official holdings over this period, and over half the $184b increase in all foreign holdings. 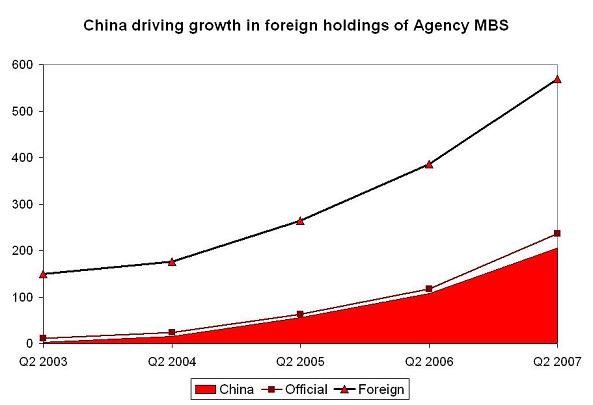 Here it is worth noting that many central banks likely outsource the management of their Agency MBS portfolio to private fund managers, so total central bank holdings of Agency MBS -- counting indirect holdings -- are likely to be higher than the US data indicates. 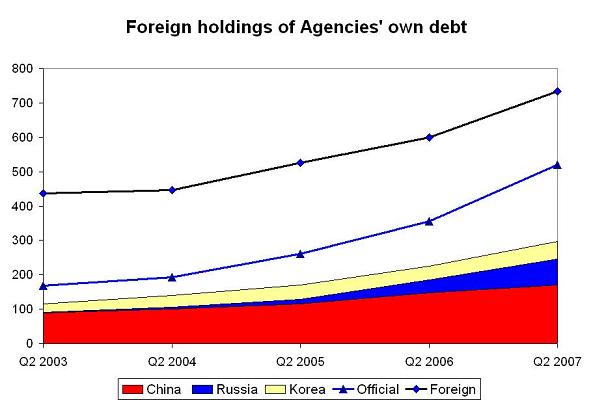 Central banks held $520 billion of the Agencies long-term debt at the end of June 2006, and an additional $79.8 of short-term Agency paper -- for a total of almost exactly $600b of the Agencies own debt. Based past patterns(and the rise in the New York Fed’s custodial accounts, it is reasonable to think that central banks now hold between $700b and $800b of this paper. Probably closer to $800 billion. The outstanding stock of the GSE’s own debt increased from $2685b at the end of June 2007 to $2940b at the end of March 2008 (data comes from the Fed’s Flow of Funds), so it is reasonable to think central banks hold around 25% of the stock of the debt the various Agencies have issued in their own name. My guess is that they own a higher share of certain parts of GSE curve than others, but I cannot deduce the details from the survey data alone.

Finally, it is worth looking at how the growth in foreign holdings of Agencies compares with the total stock of Agencies outstanding. 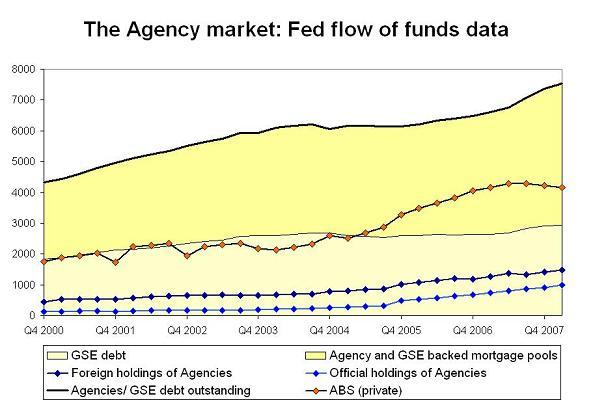 A few points are worth noting:

First, the stock of Agencies didn’t grow rapidly from mid-2003 to mid-2007, while the stock of private MBS did. This reflects limits on what the Agencies could do, the boom in subprime, Alt-A and all other kinds or mortgages and strong demand for these mortgages from private investors.

Second, the stock of Agencies is now growing rapidly. That reflects the policy decisions the US made after the "subprime" crisis.

Third, central banks starting buying significant quantities of Agency bonds when the total stock of Agencies was not growing, and have continued to buy over the past few quarters.

These trends are actually easier to see -- given the large outstanding stock of Agencies -- by looking at the annual change in official holdings, "private" foreign holdings and "private" holdings in the US. 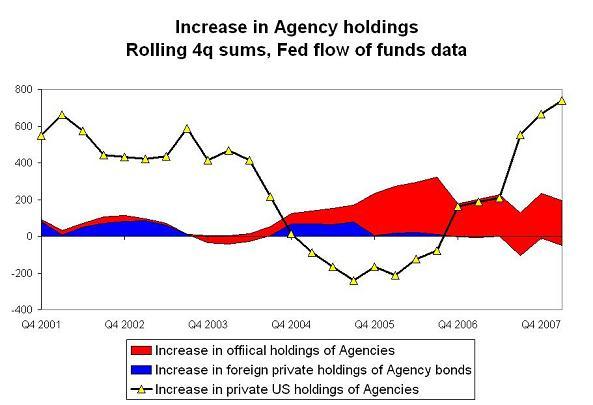 My interpretation of all this is that during the 04-06 period, central bank demand for (relatively low yielding) Agencies freed up private capital to be deployed in the higher-risk, higher-reward portions of the mortgage market, with disastrous results. No doubts others will interpret the data differently.