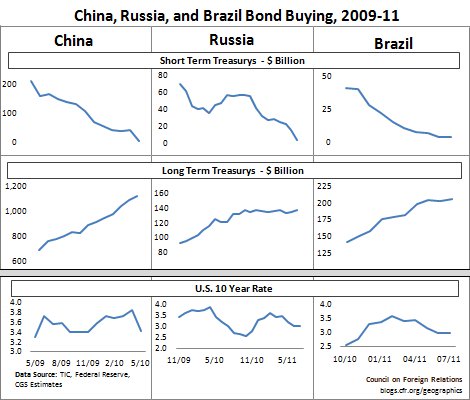 On September 21st the Fed announced that it would be selling $400 billion in short-term Treasurys and buying $400 billion in longer-term Treasurys to replace them – a maneuver titled “Operation Twist.” Atlanta Fed president Dennis Lockhart explained what it would mean for the economy: “It means lower interest rates – a lower cost of borrowing – across a whole spectrum of loan maturities.” Is he right? Well, China, Russia, and Brazil have conducted their own version of Operation Twist over the past several years, replacing roughly $330 billion in short-term Treasurys with long-term ones. The 10-year Treasury rate went sideways over that period, as shown in the figure above. Whereas the BRIC* Twist may have put some modest downward pressure on longer-term rates, other factors overwhelmed it. Don’t expect much from the Fed’s similar-sized version.

* There are no reliable data for India.

Backgrounder: The Role of the U.S. Federal Reserve

Spence: How to Reverse the Global Economic Slowdown

The State of U.S. Infrastructure