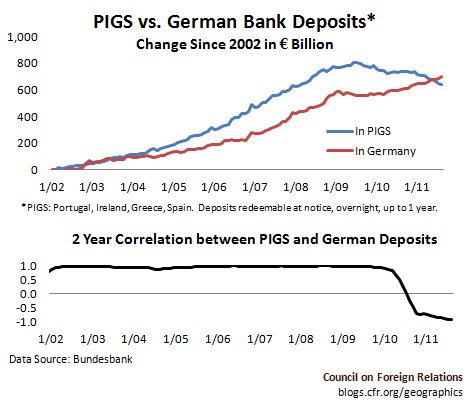 The eurozone leadership is finally coming around to accepting that a major continent-wide bank recapitalization program is necessary.  Germany wants each country to take care of its own banks.  This approach could buy time, but it won’t work for long.  National bank backstops are untenable in a common currency area, as each sovereign has its own credit risk profile.  Depositors will simply flee toward the better backstops.  This can already be seen in the correlation between bank deposits in Germany and the PIGS (Portugal, Ireland, Greece, and Spain).  Before the financial crisis, those deposits were tightly correlated, as shown in the graphic above, but over the past two years the correlation has flipped - deposits are fleeing the PIGS and flying into Germany.  A stable eurozone banking system will require a unified regulatory, resolution, and rescue regime.

Analysis Brief: Waiting on the Eurozone