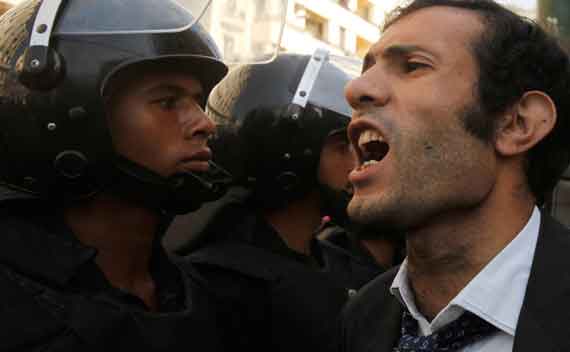 Below is my First Take on Egypt’s elections, which appeared on CFR.org yesterday.

The outcome of yesterday’s People’s Assembly election in Egypt was never in doubt and the overwhelming victory of the ruling National Democratic Party only reinforces the prevailing non-democratic status quo. At the same time, the conduct of the elections -- the security sweeps and wholesale disqualification of candidates in the weeks before the polls combined with a day of vote rigging, intimidation, and violence (eight deaths and numerous injured) -- indicates the manifest weakness of the Egyptian state.

This weakness ought to be of significant concern among U.S. policymakers ahead of Egypt’s presidential election and ultimately leadership succession. Despite episodic concern, Washington has tended to settle on the conclusion that with all its pressing problems, Egypt remains stable. The argument that Egypt is stable and likely to remain so is based on two observations. First, Egypt has demonstrated a capacity to muddle through significant challenges -- defeat in war, economic stagnation, assassination, and terrorism -- in the past. Second, the regime’s primary constituents -- the military, security services, big business, and the bureaucracy -- have never withdrawn their support from the current leadership. Both these observations are true, but they do not provide insight into the prospects for Egypt’s future stability.

An almost total lack of a compelling vision or a set of ideological principles have marked the nearly thirty-year era of Egyptian President Hosni Mubarak. For yesterday’s elections, regime-backed candidates once again trumpeted stale slogans like "For the sake of stability and development" or "Crossing to the future," which hardly elicit the enthusiasm of the Egyptian people. Moreover, unlike the Saudis or the Qataris, for example, the Egyptian leadership has a limited amount of financial resources for patronage. As a result, Mubarak has been forced to rely on coercion to control the Egyptian population. This is both expensive and risky. Indeed, the showdown between the regime and the opposition, especially the Muslim Brotherhood, over the elections only adds to an increasingly angry, polarized, and potentially radicalized political arena. This is precisely the dynamic that occurred in the period before President Anwar Sadat’s assassination and contributed to the low-level insurgency Egypt confronted in the 1990s. It is entirely plausible that as the Egyptian leadership continues to brutalize its citizens to ensure its monopoly on power, it could trigger another round of violence.

There are few good options for the United States, which relies on Egypt as a regional partner. The obvious answer to this problem is to encourage the Egyptians to undertake political reform that would, in turn, allow people to process their grievances peacefully. The Bush administration tried this with little in the way of results and until now, the Obama administration has shown little appetite for a fight with Cairo over Egypt’s internal affairs. Washington may very well be stuck, locked into a relationship that serves certain strategic purposes, but with a country that may not be as stable as widely believed.