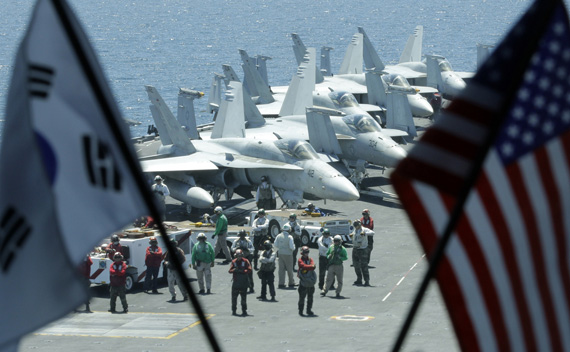 I spent last week at several meetings in Tokyo, Seoul, and Jeju that revolved around the Cheonan incident and its implications for regional security. Some Asia Unbound readers may have the impression that the Cheonan sinking and its aftermath is the only thing I write about given past posts here, here, here, here, and here, but it is worth reflecting on the evolution of the Cheonan incident and its transmutation from an inter-Korean incident into an event that has become the focal point in recent weeks for regional tension, including between the United States and China. In this post, I want to trace the phases of the incident and pinpoint where I think some actors have made mistakes. Feel free to weigh in with your own assessment of where I’ve gone wrong:

The Lee Myung-Bak administration got high marks for its handling of the immediate aftermath of the incident. It is important to remember that in the hours following the Cheonan’s sinking on March 26th, there was no rush to judgment, but rather a deliberate decision to mount an international investigation of the incident. The day after the sinking, Yonhap quoted a South Korean senior official as saying that chances are “slim” that North Korea was involved. It was not until the back end of the ship was raised that the lead investigator announced on April 16th the likelihood that an ‘external explosion’ caused the incident, shifting speculation in the direction of North Korean responsibility for the sinking. The next day North Korea denied its involvement. Lee’s cautious approach and the establishment of an international investigating team won strong support from the United States. Meanwhile, the PRC foreign ministry spokesman did not offer condolences on the loss of the sailors involved with the incident until April 22nd.

While the United States viewed Lee Myung-Bak’s handling of the incident as sober and self-contained, China viewed South Korea’s response as an emotional over-reaction, in part because of South Korean outrage over the Chinese decision to host Kim Jong Il in Beijing in early May, less than a week following Hu Jintao’s meeting with Lee Myung-Bak on April 30th at the opening of the Shanghai Expo. During that exchange, China did not inform South Korea’s leadership of its plan to host Kim Jong Il. This was the first evidence of South Korean misjudgment regarding its leverage and China’s response to the sinking of the Cheonan.

With the announcement of the results of the interim investigation on May 20th and announcement of follow-up measures on May 24th, the South Korean government prepared to take its case to the United Nations. But the Lee administration overplayed its hand, miscalculating China’s likely response at the United Nations, the capacity of the United States to bring China on board, and the likely impact of the investigation result on the June 2nd local elections.

One complicated factor for South Korea was the question of whether Premier Wen Jiabao misled South Korean counterparts on May 28th during his visit to Seoul when he said that “once we have our conclusion, we will not protect anyone” and to address the issue in an “objective and fair manner.” At Strategic & Economic Dialogue meetings with Secretary of State Clinton on May 24th, U.S. officials seem to have also heard Wen’s statement in Seoul. But at a press conference with Japanese Prime Minister Yukio Hatoyama and Lee in Jeju two days later, Wen said that “the pressing task now is to respond appropriately to the serious effects of the Cheonan incident, to steadily reduce tensions, and especially to avoid a clash.” What happened to cause these mixed signals? Was it communication with Pyongyang or the perception that Lee’s stern measures in response to the internal investigation might push an already precarious situation on the Korean peninsula over the edge? Speculation tends toward the idea that Chinese concerns over North Korea’s internal stability caused China to take a cautious approach, regardless of whether it would offend Seoul.

South Korea’s UN Security Council efforts prioritized the shaming of North Korea over the imperative of getting a quick result, but the longer things drag on at the UN Security Council, the less satisfactory the result. South Korea’s effort had the bad fortune of being displaced at the UNSC by reaction to the violent clash between Israeli special forces that boarded a flotilla of ships bent on delivering aid to the Hamas-controlled Gaza Strip. As the UN deliberations dragged on, it became clear that the UN statement would be weaker than South Korea had originally wanted, and that the United States would be unlikely to pressure China into changing its position after having just secured cooperation on sanctions toward Iran.

Although the UN Presidential Statement called for a return to dialogue, it also failed to hold North Korea explicitly accountable for its actions. The ambiguity of the statement created a motivation within South Korea to compensate for failures of the UN statement through joint military exercises designed to send a clear message to North Korea. But South Korean media speculation that the USS George Washington would join exercises in the West Sea stimulated Chinese objections. Arguably, a smaller-scale, NK-targeted anti-submarine exercise in the West Sea prior to UN debate might have sent a clear signal to North Korea at an earlier stage, before Chinese objections mounted. But even more problematic is the impression that Chinese efforts to dissuade exercises in the Yellow Sea were effective. To dispel this perception will soon require the George Washington to join exercises designed to underscore the U.S. right to exercise the freedom of navigation, further extending the crisis.

Is the Exit Phase Next?

Given that North Korea has not yet apologized or punished wrongdoers as Lee Myung-Bak requested during his May 24th press conference, it remains to be seen when we will move from the penalty to the exit phase despite possible pressures from Chinese envoy Wu Dawei’s recent visit to Pyongyang or the Carter mission to rescue Aijalan Gomes, or whether there will be other unanticipated developments that take the Cheonan incident in a different direction. The next steps are not likely to come easy.

Obama and Asia, with Apologies