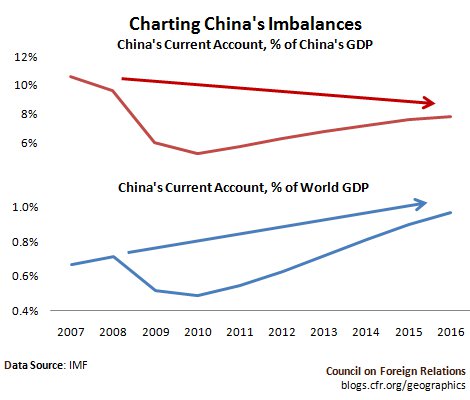 “How China’s external current account surplus will evolve in the coming years is one of the key questions on the economic outlook for China and the global economy both,” said a World Bank official in Beijing recently. The IMF presented its own answer to that question in a July 2010 report on the Chinese economy, forecasting a gentle, steady rise in China’s current account surplus, relative to its GDP, as shown in the top figure above. The forecast comfortingly shows the surplus staying well below its 2007 peak. Yet since China’s economy is growing much faster than the world economy, the IMF understates the upward trajectory of China’s growing imbalances with the rest of the world. This we show in the bottom figure, which projects China’s surplus relative to world GDP using the IMF’s own assumptions. By this measure, China’s surplus will surpass its 2008 peak within two years. If China continues to recycle dollars abroad at this pace, the global economy will become considerably more vulnerable to shocks from capital flow reversals.

Meeting: Currency Wars, Capital Controls, and the Outlook for the International Monetary System

The Changing Shape of Unemployment