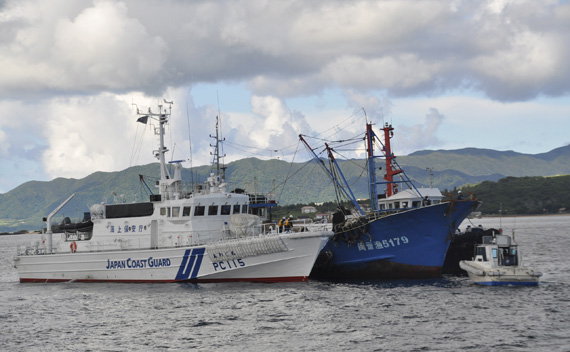 At midnight on Sunday morning, Japan’s new ambassador to Beijing, Uichiro Niwa, was unceremoniously summoned to meet a leading Chinese Communist Party official, State Councillor Dai Bingguo. Councillor Dai demanded the return of the ship and crew of a Chinese trawler detained by Japan for illegal activity in its territorial waters near the disputed Senkaku Islands.

This was Ambassador Niwa’s fifth dressing down by senior Chinese officials—including the foreign minister—but the first by a senior party official. Clearly, the Chinese leadership sought to impress Japan—and no doubt its domestic audiences—that this was an issue at the top of their agenda. Not long on the ground in Beijing, the retired chairman of ITOCHU Corporation, one of Japan’s most deeply invested firms in China, and a long-time Japanese friend of the Chinese, now finds himself on the frontline of trying to de-escalate a high stakes Sino-Japanese crisis.

Chinese fishing vessels have operated in proximity to the waters surrounding the contested Senkakus (or Daiyutai islands, as the Chinese call them), but their number has reportedly increased of late. Japan’s Asahi Shimbun reported last week that 160 Chinese fishing vessels were in the waters surrounding the area, and perhaps 30 of these were in Japan’s territorial waters, at the same time as the seized Chinese trawler.

The incident marks a first for Japan. Typically, Japan’s Coast Guard regularly sails these waters, prompting Chinese fishing vessels to turn and leave when they appear. But this time the Chinese fishing boat refused to obey the Japanese Coast Guard’s warning. Not only did the ship’s captain reportedly refused to leave when confronted by Coast Guard patrol ships, but he allegedly rammed the side of two ships in separate encounters within an hour. This unprecedented show of defiance prompted the Japanese government to bring him in, and charge him with obstructing the public duties of Japan’s Coast Guard.

Japan’s cabinet secretary, Yoshito Sengoku, at a press conference on September 8 stated that this was a domestic police action, and that under Japanese law, the investigation of the incident would proceed with a search of the Chinese trawler and interviews with the “witnesses”—the 14 crew members of the Chinese vessel. If evidence revealed he intentionally sought to obstruct the Coast Guard’s effort to detain and inspect the ship, then Zhan Qixiong, the 41-year old ship captain would be charged in Japanese court with breaking the law.

The Chinese government immediately raised the volume, claiming the Senkakus as Chinese territory and that Japan should not engage in “so-called law enforcement activities.” A day or so later, the Ministry of Foreign Affairs spokeswoman, Jiang Yu, noted that China had sent a “law enforcement” vessel to the area, and the next day, on September 10, announced it was postponing the second round of negotiations over the long-awaited East China Sea joint development agreement.

The issue simmered to a boil over the weekend, as Chinese bloggers took to the web to decry Japan’s actions. NHK reported on Monday (Tokyo time) that the Chinese blogosphere was inundated with posts over the incident, and worried aloud as to whether or not Japanese in China would be endangered. Increasing public outcry in China may perhaps explain the middle-of-the-night summons of Japan’s ambassador. In his press conference today in Tokyo, Japanese cabinet secretary Sengoku explained the status of the investigation, and steps taken over the weekend to expedite the case. He noted that the 14 crew members had been released and flown home to China and a replacement crew had arrived to take the Chinese trawler home as well.

When asked about China’s rough handling of Ambassador Niwa, Cabinet Secretary Sengoku noted that the Chinese were taking a “tough attitude” but he reported that the Chinese side conveyed their desire for a calm and careful handling of this issue. Japan, he said, would continue to be calm as well. Nonetheless, Secretary Sengoku noted that the Japanese government found it “regrettable” that Chinese authorities felt the need to call Ambassador Niwa out in the middle of the night.

And what about that ship Madame Jiang Yu said would be sailing forth to the Senkakus/Daiyutai? Could Beijing be intentionally looking for a clash with Japan over these islands? Given all of the effort over the past several years to stabilize Sino-Japanese relations, it seems hard to believe that Beijing would want to unravel all of that hard diplomatic work.

Yet with the region more alert to the various difficulties China’s neighbors are having with its maritime activities and public claims over Asian waters, it is worth asking whether or not this could be yet another effort to push the envelope in contesting the status quo in maritime Asia.

Then again, Captain Zhan may have simply panicked in his effort to escape inspection, and in ramming Japan’s two—not one but two—Coast Guard patrol boats, created an unwelcome opportunity for reopening public animosity towards Japan.

Hopefully, that “law enforcement” ship is still in coastal waters, or better yet still at port.

Meanwhile, Japan’s ruling party is preparing for a leadership election tomorrow. Let’s hope “calm and care” continues to rule the day in both capitals.

Not Gone, Not Forgotten