Skip to main content
The end of the United States exorbitant privilege?

There is a lot of angst right now about the dollar, and specifically about the dollar’s ability to remain the leading global reserve currency. Look at the FT leader at the end of 2007, or Daniel Gross in Newsweek’s end of the year spectacular.

Indeed, the only thing growing faster than angst about the dollar’s status as a reserve currency is central bank holdings of dollars.

Yet I would challenge anyone who has looked at the actual IMF data to argue that the defining feature of today’s global economy is anything other than the unprecedented pace of reserve growth in the emerging world - and the unprecedented accumulation of dollar reserves by emerging market central banks.

Take a look at a graph* showing the estimated increase -- on a rolling four quarter basis -- in dollar reserves relative to the over growth in the world’s reserves after adjusting for valuation changes. 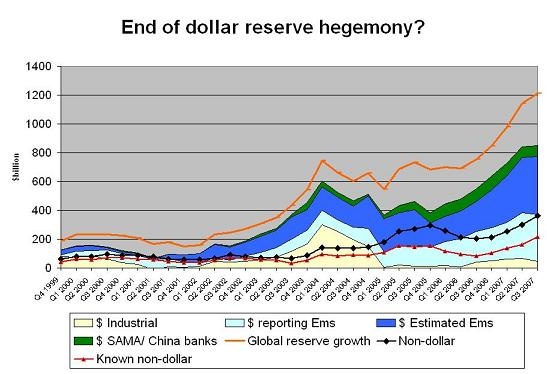 There isn’t much evidence of a shortage of dollar asset accumulation.  Central banks almost certainly added more dollars to their portfolio over the last four quarters than in other four quarter period.

Yes, a lot of dollar and euro purchases come from countries that don’t report detailed data about their reserves to the IMF - so there is a reasonable margin of error. But the countries that do not report - China, some Gulf central banks - tend to manage their currencies against the dollar, and almost certainly still have most of their reserves in dollars. And if you prefer hard data to my estimates, just compare the red line --which shows non-dollar reserve growth of countries that report detailed data to the IMF relative to the dollar reserve growth from reported industrial economies and reporting emerging economies (the sum of the tan and light blue shaded area).

What of total dollar holdings? They - not surprisingly - still quite large, both absolutely and relative to the world’s euro holdings. Best I can tell, the world still holds nearly 3 times as many dollars as euros as reserves. 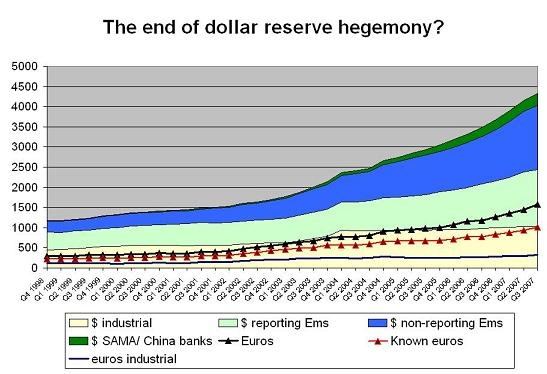 The really big change is that close to half ½ of all dollar holdings (and about 1/3 of all euro holdings) are now coming from countries that do not report detailed data to the IMF.

So why the angst?

Well, the euro is a viable alternative to the dollar in some deep sense.

The euro already has effectively displaced the dollar as the key reserve currency of Europe. Eastern European countries, the Nordic countries and Switzerland hold most of their reserves in euros. Russia is moving that way as well. The central banks of countries that are members of the euro increasingly (I suspect) hedge their dollar holdings. And Europe is enjoying a fair amount of exorbitant privilege of its own. The rise in emerging market holdings of euro reserves is now financing European direct investment in the emerging world -- much as the growth in European and Japanese dollar reserves in the 1960s financed US direct investment in Europe and Japan.

But so far the euro is basically a regional reserve currency - not a global reserve currency. The oil exporters in the gulf and the manufacturing powerhouses of Asia still manage their currencies primarily against the dollar, not against the euro. As a result they likely still add far more dollars than euros to their portfolio.

The economic logic of such an arrangement though is eroding in a less Amero-centric world economy, creating an underlying sense that the dollar’s global role is at greater risk.

The Gulf increasingly exports its oil to Asia rather than the US. It certainly buys its imports from Asia and Europe rather than the US. The East Asian manufacturing powerhouses also now increasingly trade with Europe and the commodity exporters rather than the US. Financial flows no longer map all that well to real trade flows. There is a quite plausible case that the world is now overweight dollars - both relative to the euro, and relative to Asian or oil currencies. Indeed, the real asymmetry in today’s global monetary architecture is the absence of any Asian reserve currency.

There also is -- perhaps -- a growing sense the enormous increase in central bank dollar holdings may reflect political decisions that make little economic or financial sense rather than the dollar’s intrinsic appeal as a financial asset. The dollar hasn’t held its value against the euro - or held its value relative to oil. And it isn’t likely to hold its value v. most emerging market currencies. The United States supposed comparative advantage at financial engineering isn’t worth as much now as it seemed to be worth a a year ago. Broker sam cannot sell his CDOs ... (more poetry here)

Finally, yhe fact that the US now depends so heavily on central bank financing also makes the US all the more sensitive to any change in the dollar’s status.

The US now relies on exorbitant privilege not so much to live well as to sustain the otherwise unsustainable - notably large private capital outflows from a country with a large current account deficit that isn’t attracting large private inflows. Without a lifeline from the world’s central banks, the US wouldn’t be able to finance its external deficit by selling under-performing financial assets. And if the US ever had to finance its deficit by selling financial assets that outperformed comparable assets, watch out.  The US external position would deteriorate rapidly.

That leaves the United States in a position of intrinsic vulnerability.

The real risk though isn’t that the dollar will suddenly lose out to the euro. The real risk is that a bunch of already over-reserved emerging economies will conclude that it isn’t in their interest to hold even more dollars and euros - dollars and euros that they no longer really need - in their portfolio, and that this change will come before the US has weaned itself off its need for subsidized central bank financing.

The current wave of new sovereign wealth funds is effectively an implicit admission that most emerging economies are already over-reserved.

There is, though, another risk - namely that China and a host of others won’t change, the continued availability of such financing will allow the US to sustain large deficits without producing assets that private investors want to hold, and the overhang of unneeded and in some sense unwanted dollar reserves will grow. The result: the United States’ dependence on the political good will of its creditors will only deepen.

Looking back at the top macroeconomic and financial stories of 2007, and looking forward to 2008