Note: this post is from Jeffrey Frankel filling in for Brad Setser

If strong economic growth is not the explanation for the large increases since 2001 in prices of virtually all mineral and agricultural commodities, then what is? One wouldn’t want to try to reduce commodity markets to a single factor, nor to claim proof of any theory by a single data point. Nevertheless, the developments of the last six months provided added support for a theory I have long favored: real interest rates are an important determinant of real commodity prices.

High interest rates reduce the demand for storable commodities, or increase the supply, through a variety of channels:
- by increasing the incentive for extraction today rather than tomorrow (think of the rates at which oil is pumped, gold mined, forests logged, or livestock herds culled)
- by decreasing firms’ desire to carry inventories (think of oil inventories held in tanks)
- by encouraging speculators to shift out of spot commodity contracts, and into treasury bills.

The theoretical model can be summarized as follows. A monetary expansion temporarily lowers the real interest rate (whether via a fall in the nominal interest rate, a rise in expected inflation, or both - as now). Real commodity prices rise. How far? Until commodities are widely considered "overvalued" â€” so overvalued that there is an expectation of future depreciation (together with the other costs of carrying inventories: storage costs plus any risk premium) that is sufficient to offset the lower interest rate (and other advantages of holding inventories, namely the "convenience yield"). Only then do firms feel they have high enough inventories despite the low carrying cost. In the long run, the general price level adjusts to the change in the money supply. As a result, the real money supply, real interest rate, and real commodity price eventually return to where they were. The theory is the same as Rudiger Dornbusch’s famous theory of exchange rate overshooting, with the price of commodities substituted for the price of foreign exchange.

There was already some empirical evidence to support the theory: Monetary policy news and real interest rates, along with other factors, do appear to be significant determinants of real commodity prices historically (see graph below).

But the events since August 2007 provide a further data point. As economic growth has slowed sharply, both in the US and globally, the Fed has reduced interest rates, both nominal and real. Firms and investors have responded by shifting into commodities, not out. This is why commodity prices have resumed their upward march over the last six months, rather than reversing it. 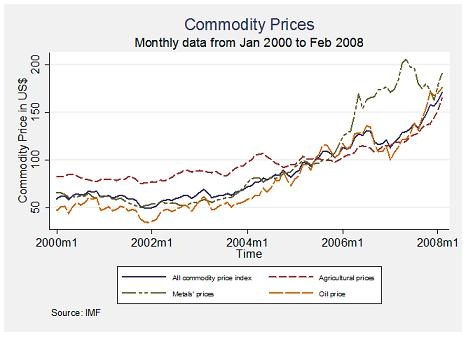 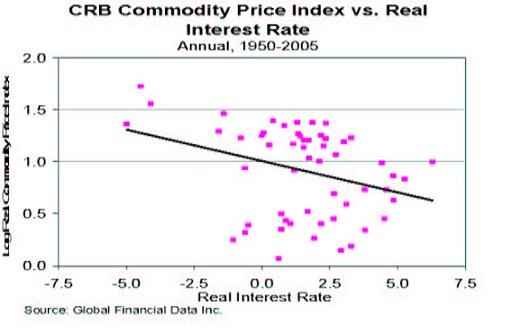