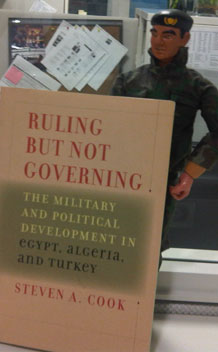 There has been a lot of talk about the Egyptian military the last few days.  In light of this commentary, I thought it would be a good idea to offer the top 5 things people should know about the armed forces:

1. The senior officers are the direct descendants of Gamal Abdel Nasser and the Free Officers who built the Egyptian regime.  The military has been a primary beneficiary of this political order and have not had to intervene overtly in politics until now because the system worked relatively well under a brother officer.  The armed forces, especially the commanders, are deeply enmeshed in the Egyptian economy.

2. It is a tremendous relief that the military has declared that it will not fire on protestors, but also not unexpected.  The Egyptian military is not the Syrian armed forces, which was willing to kill many thousands to save Hafiz al Assad in 1982.  The officers have long regarded keeping Egypt’s streets quiet the “dirty work” of the Interior Ministry.  Yet the declaration about restraint also has to do with internal military dynamics.  There is a split in the armed forces between the senior command on the one hand and junior officers and recruits on the other who would refuse to fire on protestors.  This has long been the Achilles heel of the Egyptian military.  The senior people never know whether those people below them will follow orders.  As a result, rather than risking breaking the army, the military will not use lethal force to put down the protests.

3. What is the strategy?  To contain and control the protests for as long as possible and play for time.  From the perspective of Mubarak, Vice President Omar Soleiman, the chief-of-staff General Sami Annan and the others now clinging to power every day provides an opportunity to try to weaken the opposition and peel the less committed from the demonstrations.  Is it any wonder that Soleiman started talking about constitutional change today?  The senior command believes they can save the regime.  Delusional?  Perhaps, but not surprising given their deep links to the regime.

4. If anyone ever doubted it, recent events highlight that the armed forces is the pillar of the regime.  The National Democratic Party no longer exists.  Big business has fled.  The police (remember all those arguments about how the police supplanted the military?) forces have collapsed.  Only the military remains and thus far they don’t seem to be budging.  We are getting into existential territory.  The result could be a drawn out stalemate with the military pursuing a holding action while Omar Soleiman’s intelligence service tries to split the opposition.  These guys are brutal, but not dumb.

5. The succession is already underway. The appointment of Soleiman as vice president only underscores that the military establishment is not giving up their informal link to the presidency and the regime.  If they can manage to salvage their difficult situation, the officers now in control will reconstitute the Egyptian leadership under Soleiman and Ahmed Shafiq, the new prime minister who is an air force officer (like Mubarak).  The important thing now is to manage Mubarak’s exit, which must be as graceful as possible at this point.  For honor’s sake, the brass won’t have it any other way.

Your Fix for the Israeli-Palestinian Conflict Won’t Work