Above the Fold. I spent the morning at the University of Virginia participating in a conference hosted by the Miller Center on "Presidents and U.S. Foreign Policy." The question the panel was asked to discuss was, do presidents matter when it comes to foreign policy? Most people outside of academia would instinctively answer, "Of course they do." It turns out, however, that a lot of political scientists disagree. They argue that the international structure, national interests, domestic politics, and bureaucracies either drive the decisions that presidents make or nullify any distinctive contributions they might make. I have some sympathy for these views-- hey, I have a PhD in political science--but the point can easily be pushed too far. Presidents may not make history as they please, but they make history. It is hard to imagine, to take one obvious example, that any president but George W. Bush would have invaded Iraq in 2003. Perhaps developments in social science will eventually show that there is no such thing as "individual agency." But until then I am going to go with the foreign policy variant of Pascal’s wager, which holds that even if the existence of God cannot be proven by reason, a rational person would assume He does because by doing so everything could be gained and nothing lost.

CFR Event of the Week. General James F. Amos, Commandant of the U.S. Marine Corps, swung by CFR this week for a conversation with Thom Shanker of the New York Times. With the Marine Corps’ 236th anniversary coming up, Amos discussed the Marines’ contributions to national security and how the Corps may develop in the coming years. You can read the transcript, download the audio of the talk, or watch the video.

Read of the Week. “Trends in the Distribution of Household Income Between 1979 and 2007” doesn’t sound terribly exciting. But the newest report from the nonpartisan Congressional Budget Office is packed full of data, charts, and analysis that highlight a sustained trend in the American economy: income inequality has been growing for three decades and is now at historic highs.

Blog Post of the Week. My good friend and colleague, Robert Danin, has started a new blog, “Middle East Matters,” at CFR.org. He knows the topic cold. Here a few of the posts he has held during his career: head of the Office of the Quartet Representative, Tony Blair, in Jerusalem; deputy assistant secretary of state for Near Eastern affairs; and acting senior director for Near East and North African affairs on the staff of the National Security Council. Just typing it makes me envious. (Then I remember how many long plane rides and meetings he has had to endure, and my envy subsides.) His post this week on what awaits Tunisia is superb. If you care about Middle East matters, Dr. Danin’s blog is a must read. (BTW, he also does some video blogging.)

Poll Question of the Week. Ever since 1979 Gallup has been asking Americans: Are you satisfied with the way things are going in the United States? The figure for October was a woeful 13 percent. The last time that more Americans were satisfied with the direction of the country than were dissatisfied was January 2004. That’s ninety-three straight months in which pessimism has outweighed optimism. We don’t have polling data that goes back to the founding of the Republic, but there probably haven’t been that many periods in U.S. history of such sustained dissatisfaction. I’ll leave it to the pop psychologists to determine what if anything this means for the long-term outlook of younger Americans who are now becoming politically aware.

Chart of the Week. What does economic inequality in the United States look like compared to the rest of the world? To answer that question you need to know a bit about the Gini coefficient, the most common metric economists use to measure inequality. The Gini coefficient runs on a scale from zero to one, with zero indicating total equality and one indicating total inequality (that is, one person has all the income and everyone else has nothing). Based on data from 2005, the last year for which comparable data are publicly available, the United States had one of the highest levels of income inequality among OECD nations. (If you want to know how countries across the globe rank from most unequal to most equal, the CIA has done the work for you. Warning; the data come from various years and their quality varies across countries. Hint: Sweden looks good; Namibia doesn’t). 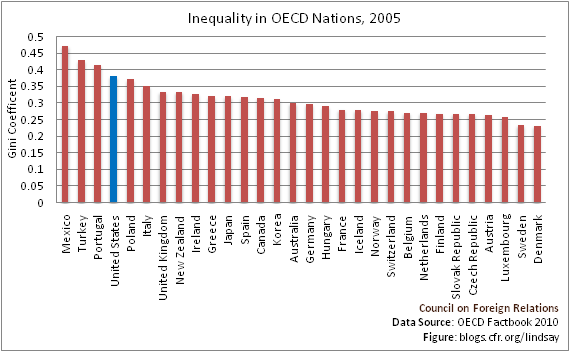 Too Good Not to Note. Adam Segal joins an ongoing conversation among CFR Asia hands as to whether India intends to chart its own, unique foreign policy strategy. Shannon O’Neil asks whether the GOP can win the Latino vote. Fred Kaplan says it is safe to ignore Republican criticism of President Obama’s policy toward Iraq. William Saletan thinks that Republican criticisms of Obama’s decision to withdraw all U.S. troops from Iraq suggest that they like the idea of a democratic Iraq in theory but not in practice. David Remnick doesn’t much like what the GOP presidential candidates have to say about Obama’s foreign policy. Katie Drummond reports that DARPA is recruiting jigsaw puzzle lovers for the ultimate dumpster dive and that the newest special operations drone should be called the Russian doll of death. Mia Bennett thinks that server farms could become the industry of the Arctic. Scott Horton argues that from the viewpoint of the law the ouster of Muammar Qadaffi was a Pyrrhic victory. Gareth Evans says that the norm of Responsibility to Protect has come of age. Nina Shea sees the Lord’s Resistance Army as an abomination in Africa.

Perils of Prediction. “This so-called war is nothing but about twenty-five people and propaganda.” Sen. Arthur Vandenberg, October 1, 1939, speaking a month after the start of World War II. Vandenberg is best remembered today as a leading proponent of an internationalist American foreign policy after World War II. His contributions stood out at the time precisely because before the war he had been an ardent isolationist, dismissing both the importance of what was happening in Europe and its impact on American national interests.

A Reason to Smile. Halloween.