Above the Fold. President Obama has reached the halfway point of this term and his midterm grades are coming in. Whether the graders live inside the beltway or outside of it, Obama doesn’t make the Dean’s List. That’s not surprising. With one exception, no president in my lifetime looked terribly good two years into his first term. George W. Bush was the exception, and September 11 fundamentally changed the trajectory of  his presidency. The good news for Obama is that contrary to F. Scott Fitzgerald there are second acts in American life. Next Tuesday’s State of the Union Address is his opportunity to roll out Obama 2.0 on the national stage. The speech will undoubtedly follow form and mention a laundry list of programs and initiatives. (Some bipartisan traditions still hold.) The thing to watch for is whether he presents a credible plan to put the U.S. government back on a sound financial footing. Obama’s success or failure on that front will be the ultimate measure of his presidency.

CFR Event of the Week. CFR celebrates its ninetieth anniversary this year. We are marking the occasion with a series of events on “Renewing America.” Richard Haass, Roger Altman, George Stephanopoulos, and Michael Mandelbaum kicked things off with a discussion of “American Power and Profligacy.” You can read the transcript, listen to the audio, or watch the full video. In the clip below, Roger Altman discusses the government and private sector avenues to a solution to the U.S. budget crunch.

Read of the Week. William Broad, John Markoff, and David Sanger wrote an excellent piece for the New York Times describing the U.S. and Israeli effort to derail the Iranian nuclear program with the Stuxnet computer worm. It’s real cloak-and-dagger, 24 kind of stuff.

Blog Post of the Week. Americans are fretting that China is set to dominate the emerging clean energy industry. My colleague Michael Levi says, “not so fast my friend” in both his blog and in an article on foreignpolicy.com. He argues that the performance of American firms is stronger, and that of Chinese firms weaker, than some of the numbers being tossed around by policymakers and journalists suggest.

Poll Question of the Week. President Obama gets some good news as he hits the midpoint of his term—his poll numbers are up. The Wall Street Journal/NBC News and CNN/Opinion Research polls both put Obama’s job approval rating at 53 percent. The ABC News poll puts it at 54 percent. That’s up from the 46-48 point range most polls had him in a few weeks ago. The improved poll numbers suggest that Obama’s efforts to reclaim the center of American politics are working.  If he can sustain the higher numbers, Republicans will face a more daunting challenge in enacting their agenda. Popularity is power in Washington, DC.

Chart of the Week. With President Obama pressing President Hu in DC on universal rights and Tunisian protesters demanding new leaders, talk of freedom and democracy has been in the air. Last week Freedom House published its annual survey of freedom in the world. Its overall conclusion is that the trend is headed in the wrong direction—2010 marked the fifth year in a row that global freedom has declined. The chart below breaks the world’s countries down by "free," "partly free," and "not free." 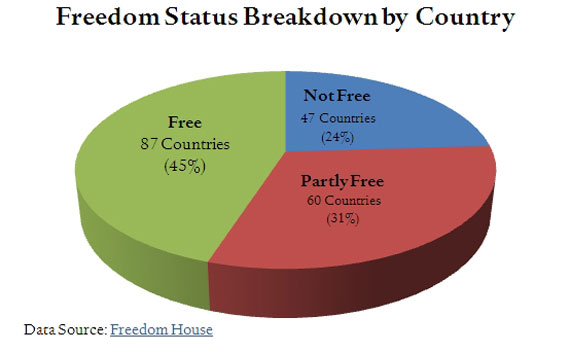 Too Good Not to Note. President Hu’s visit attracted lots of comments from bloggers. My good friend and colleague Elizabeth Economy credits President Obama with staking out a strong position on human rights and creating forward momentum on trade and investment. My colleague Adam Segal argues that President Obama scored some overlooked successes on the technology front in his meeting with President Hu. CFR President Emeritus Les Gelb concludes that Hu beat Obama in a test of wills. Uri Friedman gathers up instant assessments of the significance of the trade deals struck during the state visit. Finally, Michael Shear explores the delicate matter of how to label the invitation to President Clinton and Secretary Clinton to attend the state dinner.

Perils of Prediction. “The French people are incapable of regicide.”  King Louis XVI, 1789.  Louis was guillotined on this day in 1793.

A Reason to Smile. A Dunkin Donuts Boston Kreme doughnut.