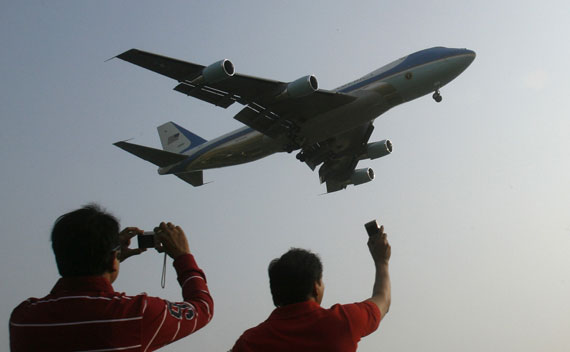 Above the Fold. President Obama’s scheduler must be nursing a grudge.  Last Sunday the president returned from what had to be an exhausting ten-day, around-the-world trip that took him to four countries and required innumerable speeches, meetings, and photo-ops.  His reward?  He gets to fly to Lisbon for this weekend’s NATO Summit.  The issue topping the agenda there is approval of a new “Strategic Concept”—a blueprint for adapting NATO to a global environment in which traditional military attacks are unlikely but unconventional attacks in the form of terrorism, weapons of mass destruction, and cyber attacks are not.  The Concept will restate the commitment to collective defense, endorse limited missile defense, and reaffirm a willingness to act outside of Europe.  But as is always the case with summits, it matters less what the participants say they will do than what they actually do.  And there are reasons for concern.  European defense spending is falling, doubts about the wisdom of operations in places such as Afghanistan are growing, and NATO’s relevance to America’s security interests elsewhere in the world is uncertain.

CFR Event of the Week. CFR’s Stephen C. Freidheim Symposium on Global Economics examines what the rise of currency wars means for the international monetary system.  Freely floating exchanges are out, and capital controls are in. Lawrence Summers, Director of the National Economic Council, talked with Tim Ferguson, editor of Fobes Global, during the  Symposium.   Summers and Ferguson discussed Asian nations’ currency exchange anxieties, derivatives regulation, and Summers defended the Obama administration’s intervention in the auto industry. You can watch the full video or read a complete transcript. In the clip below, Summers says that the major test of Obama’s economic policies will be how the growth rate fluctuates over the next few years.

Backgrounder of the Week. If you want to know what the White House and Senate Republicans are fighting over, then check out this CFR backgrounder on what New START seeks to accomplish.

Read of the Week. Peter Baker in today’s New York Times provides a nice summary of what’s at stake following President Obama’s decision to force a showdown with Senate Republicans over the New START treaty.

Blog Post of the Week. Walter Russell Mead weighs in as only he can on President Obama’s trials and tribulations. What he writes will variously annoy and please partisans on both the left and the right.  The president would be wise to mull over the policy questions Walter asks.   I would push Walter’s argument that both expectations for and criticisms of Obama have been overblown a step further and predict that we are at or near the bottom of the Obama bear market.  The rhythms of the news business and the fact that Republicans will soon share the onus of governing will soon mean a course correction in news coverage of Obama.

Poll Question of the Week. President Obama failed last week to meet his self-imposed deadline to finish the Korea-U.S. Free Trade Agreement.  The polls suggest that this failure isn’t likely to upset many voters.  Back in September a NBC News/Wall Street Journal poll asked: "In general, do you think that free trade agreements between the United States and foreign countries have helped the United States, have hurt the United States, or have not made much of a difference either way?"  Fewer than 1 in 5 Americans (17%) said trade agreements helped; more than half (53%) said they hurt.  To put those numbers in perspective, in December 1999, 39% of those surveyed said trade agreements helped and only 30% thought they hurt.

Chart of the Week.  Much has been made in recent weeks about President Obama’s political failings, including his supposed inability to connect with average Americans and his inability to craft an overarching theme for his administration.  But when compared with the trends in overall public approval for Presidents Reagan and Clinton, who are often hailed for being able to reach voters and craft narratives, Obama’s travails look pretty typical.  At this point in his presidency he has higher approval ratings than Ronald Reagan and only slightly lower ratings than Clinton. 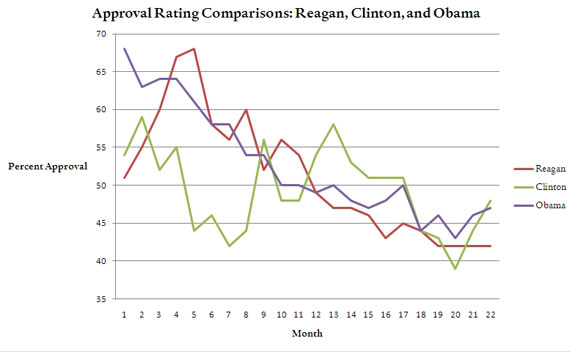 Too Good Not to Note. Fareed Zakaria endorses a hedge strategy for dealing with China. James Traub asks if Bibi Netanyahu wasn’t the real winner of the midterm elections.  Thomas Kleine-Brockhoff joins the chorus criticizing the Federal Reserve’s last round of quantitative easing (QE2) and defends Germany’s currency policies.  Bob Kagan writes that Republicans will be making a strategic and political mistake if they succeed in derailing the New START treaty.  The "shadow" deficit commission sponsored by the Bipartisan Policy Center and headed up by former Senator Pete Domenici and former Federal Reserve Vice Chairman Alice Rivlin lays out its ideas for reducing the federal deficit in a report published this week.  Dan Drezner discusses the paradox of why it pays to write op-eds proposing far-fetched ideas.

Perils of Prediction. “We are not going to have a war.  Germany isn’t ready for it...I have my own sources of information.”  Sen. William E. Borah, July 1939.

Quote to Ponder. “Nothing ever gets settled in this town…a seething debating society in which the debate never stops, in which people never give up, including me.”  Secretary of State George P. Shultz, December 9, 1986.

A Reason to Smile. The McRib sandwich, now available at McDonald’s nationwide for the first time in 16 years.

The Treaty of Versailles Remembered