Above the Fold. President Obama got himself into hot water this week when he was overhead telling Russian president Dmitri Medvedev he would have “more flexibility” on issues like missile defense after the November election and that incoming Russian president Vladimir Putin should give him “space.” The incident added to a long list of presidential and vice presidential “open mic” gaffes. During a sound-check before a 1984 radio interview, Ronald Reagan warmed up by saying,  “My fellow Americans, I’ve signed legislation that will outlaw Russia forever. We begin bombing in five minutes.” That got people’s hearts pounding. Vice President Biden famously called the signing of Obama’s health-care bill in 2010 “a big f***ing deal.” Parents of young children were not pleased.

Obama’s critics have blistered him for this week’s gaffe, because, well, that’s what critics do. Mitt Romney says he is “very, very concerned” that the president is “looking for greater flexibility where he doesn’t have to answer to the American people.” Rick Santorum sees Obama’s comments as “suggesting that he is willing to sacrifice American security.” Newt Gingrich said the conversation amounted to an "extraordinary moment caught on tape where the president basically said to a Russian leader, ’Please wait until after the election so I can sell out.’” Speaker of the House John Boehner chimed in, sending the president a letter saying he was “alarmed to learn of the message you sent to incoming Russian President Vladimir Putin while in South Korea Monday.” The open mic moment so upset Senator Marco Rubio that he promptly endorsed Mitt Romney for president. (That presumably was not the outcome that Senator Santorum or Speaker Gingrich wanted.) So be prepared for tough campaign ads this fall showing Obama talking to Medvedev with ominous music in the background. The ads won’t change many votes, but they will give campaign consultants something to do.

A remarkable thing about the open mic contretemps has been the near uniform assumption that President Obama is misleading the American public and telling the truth to the Russians. But what if that assumption is exactly backwards? Obama wouldn’t be the first president to use elections as an excuse to avoid giving a foreign leader what he or she wants, or to buy some much-needed time for his own policies. The tactic might even be considered the hallmark of the statesman; successful politicians know that is frequently better to dissemble than be to blunt. In any event, you can bet dollars-to-doughnuts that some of Putin’s advisers are debating the possibility right now that they, and not American voters, are the ones being played.

CFR Event of the Week. President Obama created the Council on Jobs and Competitiveness to “ensure that business can take root and folks can find good jobs and America is leading the global competition that will determine our success in the 21st century.” On Thursday, two members of the Council—DuPont CEO Ellen Kullman and UBS president Robert Wolf—along with Office of Management and Budget acting director Jeffrey Zients, joined Garrick Utley in CFR’s New York office to discuss the Council’s recommendations. Zients says that “about two-thirds of” the Council’s ninety specific recommendations “are things that we as an administration can do on our own through executive action, and thirty are legislative proposals.” What are some of those ninety recommendations? Kullman believes that “from a U.S. standpoint, we have to get back to advanced manufacturing…it is a huge job creator.” Wolf argues that “infrastructure” is “our best engine of growth” because “for every dollar spent it’s a multiplier of 1.6 times.” You can see the full discussion on video here or below, listen to the audio, or read the transcript.

Read of the Week. Edward Luce, the chief U.S. columnist for the Financial Times, is out with a superb new book, Time to Start Thinking: America in the Age of Descent. As you might gather from the subtitle, Ed is a bit glum on America’s future. (Just to make sure that readers don’t miss his point, Ed titled his concluding chapter, “An Exceptional Challenge: Why the Coming Struggle to Halt America’s Decline Faces Long Odds.”) I am much more upbeat on America’s ability to adapt and adjust to a changing world. But that process of reinvention and recreation only happens because books like Ed’s force us to look at ourselves as we are rather than as we pretend to be. So in taking readers on a tour of blighted neighborhoods in Flint, Michigan and past the empty parking lots at once bustling Bell Labs in New Jersey, Ed has done a far greater public service than all speeches touting America’s greatness that will be given during this campaign season.

Blog Post of the Week. This is a week that brings elation—and a good dose of disappointment—to high schools around the United States and beyond. By now most college-bound students have learned whether they have been accepted, denied, or waitlisted. The highs and lows that the kids are experiencing pale in comparison, though, to the sticker shock that their parents are undergoing. College costs a bloody fortune! So to all those parents suddenly frazzled because the real cost of a college education has tripled over the past three decades, Derek Thompson offers up the perfect antidote. Although going to college is expensive, he notes that not going to college is even more expensive.

Poll Question of the Week.  Egypt will be holding presidential elections in May, and the Muslim Brotherhood is trying to decide whether to run a candidate in the race. The prospect of the Brotherhood taking over the Egyptian government has some foreign policy experts saying “beware.” After all, the Brotherhood’s rhetoric toward Washington has been unkind. To judge from the results of a new Gallup poll, that’s perfectly fine with many Egyptians. When asked “are closer relations with the United States a good thing or a bad thing for Egypt,” 56 percent of Egyptians says it is a “bad thing” and only 28 percent say it is a “good thing.” Back in December, 41 percent of Egyptians thought that better relations with the United States were a good thing. Why the thirteen-point drop in four months? It probably has something to do with the spat over the operations of foreign pro-democracy groups in Egypt and with many Egyptians feeling that their status in the world is rising. Put the two together, and it is hardly surprising that “anti-Americanism is thriving in Cairo.” Before you despair, however, keep this in mind. Public opinion can be fickle, as the movement in America’s favorability ratings in Egypt over the four months shows. If Washington pursues smart policies, its Egyptian popularity problem will solve itself.

Chart of the Week. Bashar al-Assad has accepted a six-point plan put forth by UN-Arab League envoy Kofi Annan to “end” the crisis in Syria.  We’ll see how that goes. Russian president Dmitri Medvedev has vowed support for the plan. This marks a change of tone if not substance in Russian policy. Moscow vetoed a toothless UN Security Council resolution on Syria just last month, claiming it was another Western attempt at “regime change.” Some critics argue that Russia’s opposition had a more base motive: a desire to continue selling weapons to Syria. Which leads to a question: Who are the market leaders in the international arms trade? Thanks to the Economist, we know the answer—and it’s not China. The United States and Russia top the charts of arms dealers, with Germany, France, and Britain far behind. Not surprisingly, countries sell more to their friends. The number one destination for U.S. arms exports is South Korea. Germany sells a lot to Greece (and gives it a lot of money as well); France is cozy with Singapore, and Britain has a friend in Riyadh. Don’t expect the international demand for weapons to ease any time soon. 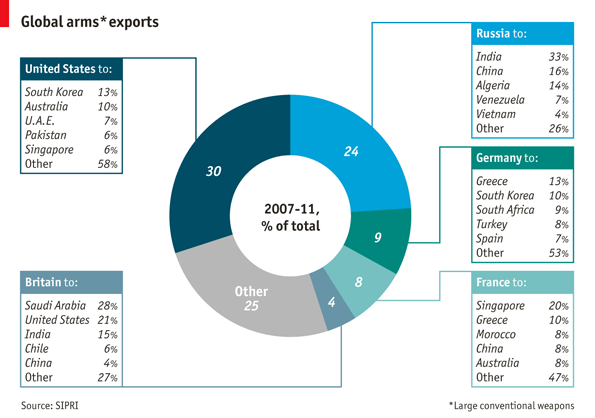 Too Good Not to Note. Elliott Abrams found the Pope’s trip to Cuba “sad”; I think he is being kind. Joshua Kurlantzick wonders what will happen on Myanmar’s by-election day. Ron Rosenbaum sits down with my old boss Richard A. Clarke and discovers that RAC believes that the United States and not Israel was behind the Stuxnet virus. Robert Kelly thinks that the United States won’t pivot much to Asia. Peter Bergen has charts to show what we pretty much already suspected: the Afghan army and police pose a growing threat to U.S. and NATO troops. Matt Bai tries to figure out who killed last year’s “debt deal,” Barack Obama or John Boehner? Mitt Romney’s foreign policy advisers don’t think much of Obama’s handling of foreign policy, and Obama’s advisers don’t think much of what Romney’s foreign policy advisers have to say.

Perils of Prediction. “Printed books will never be the equivalent of handwritten codices, especially since printed books are often deficient in spelling and appearance.” Johannes Trithemius, German abbot and scholar, “In Praise of Scribes,” 1492. Actually, printed books did alright for themselves for 500 years.

Quote to Ponder. “The greatness of America lies not in being more enlightened than any other nation, but rather in her ability to repair her faults.” Alexis de Tocqueville, Democracy in America.

A Reason to Smile. Accepting an offer of admission from your favorite school. Congratulations, Cameron! #HTTV

The World Next Week: U.S. Presidency of the UN Security Council