Above the Fold. Seldom can I remember more skepticism about a president’s foreign policy choices at the start of a military operation than we have with Operation Odyssey Dawn. Whether people favor intervening in Libya or oppose it, everyone seems to be asking questions that don’t have clear answers: What will we do if Qaddafi accepts the cease-fire? Are we prepared to guarantee the security of a slice of Libya for years to come? Are we going to help the rebels march to Tripoli? Can we resist expanding our involvement in what the administration calls a “kinetic military action” rather than a war? What will NATO and European cooperation look like when the fighting stops? Can the president maintain public support if fighting in Libya drags on? The fact that these questions are being asked doesn’t mean the operation is doomed. The White House may yet have something up its sleeve or conjure up the right policy in the pressure of the moment. Necessity, after all, is the mother of invention. The dynamics of war certainly have changed overnight before. In early November 2001, the conventional wisdom was getting ready to declare Afghanistan a quagmire. Then the Taliban broke, Kabul fell, and administration insiders went from shifting the blame to claiming credit. Perhaps the same thing will happen in Libya. Even so, I suspect we will be questioning the wisdom of (and reasons for) President Obama’s decision for years to come.

CFR Event of the Week. CFR brought together three Middle East experts this week to discuss the political turmoil roiling the region: Lisa Anderson, the president of the American University in Cairo; Ayman Mohyeldin, Middle East correspondent for Al-Jazeera English; and Tom Lippman, a former reporter for the Washington Post and an adjunct senior fellow at CFR. That’s a lot of talent and experience talking about one of the most pressing foreign policy challenges facing the White House. You can watch the video, read the transcript, or download the audio to go.

Read of the Week. CFR Distinguished Visiting Fellow A. Michael Spence and Sandile Hlatshwayo have just released a new paper on the employment challenge the United States faces in an age of globalization. Mike is as good as you get in the economics profession. Besides being a Rhodes Scholar, winning the John Bates Clark Medal (awarded to the best economist under the age of 40), and the Nobel Prize in the Economic Sciences, he has been dean of the faculty of arts and sciences at Harvard and dean of the Stanford Graduate School of Business. The paper looks at the evolving structure of American employment and the news isn’t good. Job growth over the past two decades has come mostly in the so-called non-tradable sector of the economy—essentially jobs that can only be done here at home—and not in the tradable sector—jobs vulnerable to foreign competition. To put a finer point on it, much of our job growth is coming in the fields of government and health care, two areas where budgetary pressures are building to cut jobs. Here’s the most dismaying news: there is no easy fix for our employment troubles. If you are not the adventurous type or would prefer Cliff Notes to the original masterpiece, check out Steven Pearlstein’s piece on the Spence-Hlatshwayo paper in the Washington Post.

Blog Post of the Week. Harvard Law School Professor Jack Goldsmith argues that Obama has the constitutional authority to order military action against Libya without congressional consent not so much because the Framers intended for presidents to have that power but because past practice has legitimated it—a position not likely to win him fans with the Tea Party movement. Andrew McCarthy, Ilya Somin, and Michael Ramsey have fired back with a long list of reasons why Professor Goldsmith has it all wrong. These arguments won’t settle anything. Legal academics have been arguing these points for at least five decades without reaching a consensus, and the one group that could settle the argument—the Supreme Court—wants nothing to do with the issue. But the exchanges provide a good sense of the different perspectives on the matter, as well as how lawyers ransack history to make their case.

Poll Question of the Week. Some good news for President Obama. Gallup is out with the results of its annual survey of how people around the world rate the leaders of the major powers, and the United States is No. 1! It’s not even close. Germany is in second with a 40 percent approval rating, or seven percentage points behind the United States. China and Russia bring up the rear with approval ratings of 31 percent and 27 percent respectively. Apparently much of the world has yet to read the memo that the China model is the new hot fashion.

Chart of the Week. I wrote above that most U.S. job growth over the past two decades has come in the non-tradable sector of the economy. Here’s a chart making the point. 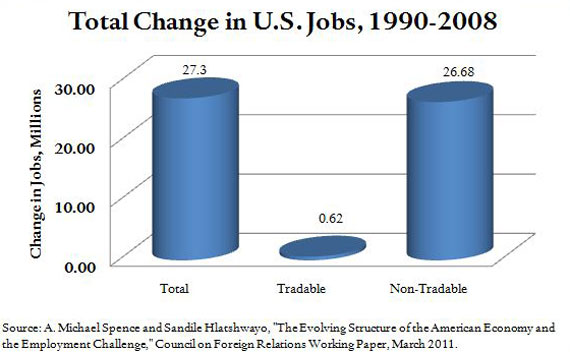 Too Good Not to Note. Chris Good of the Atlantic lays out who on Capitol Hill is backing President Obama on Libya. Jack Goldsmith explains why the Obama administration’s insistence that Libya does not amount to a “war” owes not just to domestic political considerations but to legal considerations as well. John Campbell asks why the international community is neglecting the humanitarian disaster unfolding in Cote d’Ivoire while similar problems in Libya have prompted military action. Adam Segal writes that we may be moving into a “two-Internet world” as China increasingly shapes the Internet to meet its own political and economic needs.

Perils of Prediction. “With over fifty foreign cars already on sale here, the Japanese auto industry isn’t likely to carve out a big slice of the U.S. market for itself.” Business Week, August 2, 1968.

Quote to Ponder. “We may have democracy, or we may have wealth concentrated in the hands of a few, but we cannot have both.” Louis D. Brandeis, quoted in Labor, October 14, 1941.

A Reason to Smile. Cherry blossoms.

The Strategy, Politics, and Constitutionality of Operation Odyssey Dawn