Above the Fold. President Obama used his speech to the annual conference of the American Israel Public Affairs Committee last Sunday and his White House press conference to take his critics to task for “beating the drums of war.” The president is certainly right that there has been far too much “loose talk of war.” Problems always look much easier from the vantage point of the campaign trail where “folks don’t have a lot of responsibilities.”

The war fever we are seeing today is nothing new to American politics, however, as Presidents James Madison and William McKinley could both attest. The framers (including Madison) believed that a democratic republic would be far more careful than a monarchy in deciding to go to war. But in practice, the rhythms of democratic politics have at times encouraged sabre rattling. Madison found himself lobbied by so-called War Hawks led by Henry Clay of Kentucky to confront Great Britain over the many indignities the former colonial power had inflicted on Americans and the opportunity to wrest Canada from British control. McKinley faced intense pressure from belligerent imperialists who demanded war with Spain over Cuba. The pressure became so intense that the indecisive Ohioan occasionally had to take drugs to sleep. After the explosion aboard the USS Maine, McKinley’s vice president told him that Congress "will act without you if you do not act at once."

Madison and McKinley both eventually gave in to the war fever that they faced. McKinley was rewarded with a “splendid little war” that signaled America’s emergence as a major power. Madison was punished with a war that prompted secession talk in New England and left the White House in flames. We shall see what choices Obama makes, and what consequences the nation will bear.

CFR Event of the Week. The White House has unveiled its proposed FY 2013 defense budget, and the Defense Department’s funding looks like it will stay flat in real terms. With challenges such as Iran, Syria, and a still-turbulent Afghanistan already on its plate, steadily rising personnel and health-care costs, and who knows what national security crises to be faced down the road, how will the Defense Department adjust to an era of fiscal austerity? Deputy Secretary of Defense Ashton B. Carter took a crack at the question when he spoke at CFR this week as part of the Paul C. Warnke Lecture in International Security series. The U.S. military would “need to make consequential changes in our approach to defense at this moment of history,” Carter said, “even if we had all the money that we want.” But, he acknowledged, budget constraints will require the Pentagon to make an “enormous adjustment.” To find out what that might mean in practice, you can watch the video here or below, listen to the audio, or read the transcript.

Read of the Week. Ryan Lizza applies his dazzling reportorial skills to trying to make sense of a befuddling GOP presidential campaign in which eleven different people have led the Republican presidential polls and the putative establishment front-runner leaves much of the GOP base longing for a new candidate. If Lizza is right about what ails the Republican Party, Democrats will be celebrating come November.

Blog Post of the Week. Why are so many American companies investing abroad rather than here at home in the United States? My colleague Edward Alden reviews the results of a fascinating survey that two professors at the Harvard Business School recently conducted with 10,000 HBS grads. Ted writes that the survey shows why business leaders don’t see the United States as an attractive place to invest. He says that three sets of problems are hampering efforts to get companies to invest at home: “problems we can do nothing about; problems we could do something about but shouldn’t; and finally problems that we could and should address.”

Poll Question of the Week. The newspapers and internet offer up plenty of threats and challenges to worry about. So what concerns the American public the most? If a recent Gallup poll is to be believed, Americans are most worried about the amount of U.S. debt held by other countries. Seventy-three percent of Americans say they are “very concerned” about how much the United States owes other countries. By contrast, the political situation in Iran has only 57 percent of Americans “very concerned,” 51 percent say the same thing about trade relations with China, and 44 percent dread the financial crisis in Europe.

Chart of the Week. Yesterday was International Women’s Day. In honor of the occasion, The Economist Intelligence Unit published its second annual Women’s Economic Opportunity Index. The index ranks how encouraging the climate is for female employees and entrepreneurs in 128 countries. Sweden tops the list. Chad and Sudan are at the bottom. 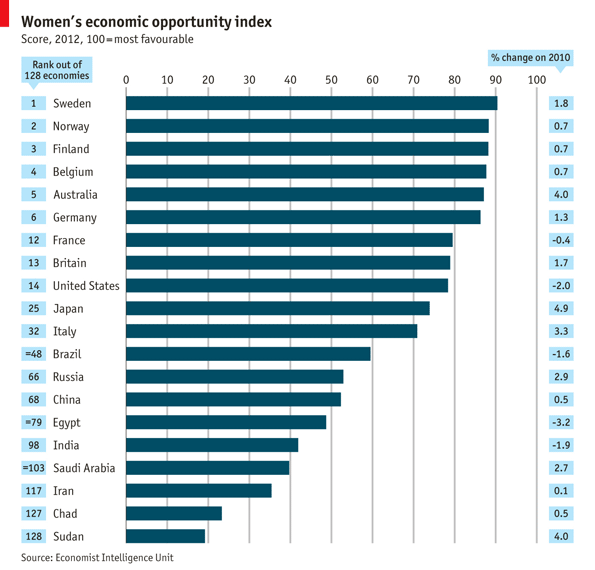 Too Good Not to Note. Liz Economy goes behind the scenes at China’s Lianghui—the annual meetings of the National People’s Congress and Chinese People’s Political Consultative Conference. Melissa Bert and Blake Clayton see a new potential threat from Cuba—a Deepwater Horizon-style oil spill. Isobel Coleman and Melanne Verveer, ambassador-at-large for Global Women’s Issues at the Department of State, honor the unique contributions of women around the world on International Women’s Day. Elliott Abrams thinks that the current non-action on Syria means it is time to say rest in peace R2P, and no, he’s not happy about it. Steven Cook contemplates what a post-Assad Syria looks like. David Remnick and Steve Coll discuss in their weekly podcast whether Iran can be contained. Jonathan Tepperman warns of the dangers of piecemeal military intervention in Syria. Dexter Filkins reports on Turkey’s bad habit of harassing and arresting journalists. Chiara Ruffa asks if the Afghan War was worth the effort. Christopher Preble compares the Obama and Romney defense budgets. Nate Silver works through Rick Santorum’s daunting delegate math. Farhad Manjoo concludes that the iPad is unbeatable—and probably always will be.

Perils of Prediction. “When will China collapse? Within this decade—in other words, by 2011.” Gordon Chang, a columnist with Forbes and author of The Coming Collapse of China, which was published in 2001. China looks to be intact, but Mr. Chang is sticking to his prediction. He now says that China’s collapse will come sometime this decade. Or maybe in 2012.

Quote to Ponder. “Problems are only opportunities in work clothes.” Henry Kaiser.

The World Next Week: The One-Year Anniversary of the Tsunami Disaster in Japan