Above the Fold. The newspapers spread across my desk are a sea of bad news. Iraq looks to be descending once again into sectarian warfare. Portable surface-to-air missiles are unaccounted for in Libya.  A twenty-something now controls a nuclear arsenal. The eurozone crisis persists, leaving a dark cloud over the entire global economy. I could go on. But I won’t. It’s two days before Christmas and the fourth night of Hanukkah. Some good news is needed. Here are three trends that run counter to the steady diet of bad news. First, Latin America has thus far bucked the tough economic winds that have buffeted the rest of the global economy. The region’s GDP grew at nearly 6 percent last year, and the percentage of the population living in poverty has fallen from a peak of 48 percent in 1990 to 30 percent today. Second, to the surprise of most experts, Burma’s political opening looks to be genuine. The new government has freed political prisoners, relaxed censorship rules, and openly talked with the political opposition. Third, progress is being made in the battle against HIV. UNAIDs reports that the global incidence of HIV infections has stabilized and even begun to decline. One reason is advancements in antiretroviral drugs. A research study concluded this past May that antiretroviral drugs not only help manage AIDS but also prevent its spread. (Science magazine named the study the “Breakthrough of the Year.”) And here’s a bonus piece of good news: an eight-year old Indonesian girl who was swept away by the horrific December 26, 2004 tsumani was re-united with her family this week. My fingers are crossed that 2012 brings many more good news stories.

CFR Event of the Week. Kim Jong-Il’s death was the big foreign policy news this week. My colleagues Scott A. Snyder, senior fellow for Korea studies, and Paul B. Stares, General John Vessey senior fellow for conflict prevention, sat down for a media conference call to discuss what Kim’s death means for the two Koreas and U.S. policy in the region. You can listen to the audio here, or read the transcript here.

Read of the Week. Matthew Kroenig, an assistant professor at Georgetown University who is spending the year at CFR as a Stanton Nuclear Security Fellow, writes in the latest edition of Foreign Affairs (which by the way is a must-read) that a military attack on Iran is the least bad option in stopping Iran’s nuclear program. I come down on the containment side of this debate, and scholars like Daniel Drezner and Stephen Walt have already penned sharp (perhaps excessively so) criticisms of Matt’s argument. Nonetheless, it will get a lot of attention—don’t be surprised when GOP presidential candidates start waving copies of Foreign Affairs on the campaign trail. The question of whether to attack Iran could become the issue of 2012. So read Matt’s piece and decide for yourself how much of a gamble it would be to exercise the military option.

Blog Post of the Week. Fred Kaplan observes that we know little about North Korea’s new leader, Kim Jong-un, which is why the North Korean transition is so scary.

Poll Question of the Week. In case you were wondering, Christianity remains the dominant religion in the United States. Gallup calculates based on more than 325,000 interviews that 52.5 percent of Americans are Protestant, 23.6 percent are Catholic, 1.9 percent are Mormon, 1.6 percent are Jewish, and 0.5 percent are Muslim. Slightly more than one in seven Americans say they are atheists or agnostics.

Chart of the Week. Let’s stick with the Christianity theme. A century ago, more than nine in ten of the world’s Christians lived in either Europe or the Americas. Today, Europe and the Americas account for slightly more than six in ten of the world’s Christians. One in four live in sub-Saharan Africa, and one in eight live in Asia. (About half the world’s Christians are Catholic, slightly more than a third Protestant, and a twelfth Orthodox.) The changing face of Christendom reflects both differing demographic trends around the world—Europe’s population has grown much more slowly than any other region in the world—and active efforts by Christian churches to proselytize. In all, there are about 2.2 billion Christians around the world, making it the most widely practiced religion. (Islam is the second most widely practiced religion, with an estimated 1.6 billion practitioners.) How do I know all this? Because the Pew Forum on Religion and Public Life released an impressive study this week that looks at the size and distribution of the world’s Christian population. May they all have a Merry Christmas. 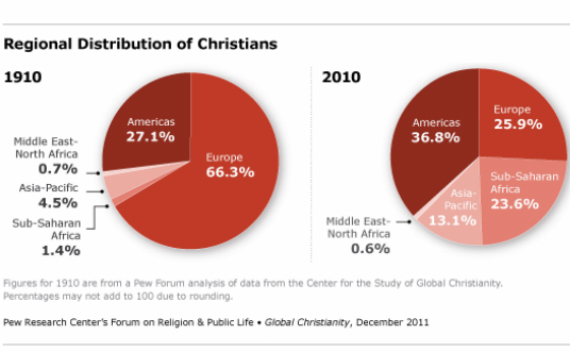 Too Good Not to Note. Richard Haass notes that 2011 was a dangerous year for the world’s bad guys. Steven Cook thinks that things are spinning out of control in Egypt and that the military is not the only one to blame. Robert Danin offer his impressions from a recent visit to Jerusalem of what Israelis and Palestinians are thinking. Sheila Smith looks back at the year of “triple disasters” in Japan. Michael Moran picks out the winners and losers one year into the Arab uprisings. John Lee Anderson says that we are not going to get a “decent interval” after the U.S. departure from Iraq before things start to unravel. Toby Jones thinks that the United States should withdraw from the entire Middle East. Scott Clement asks whether Republican voters are as worried about Iran and radical Islam as their presidential candidates are. Jeff Madrick has his list of the ten worst economic ideas of 2011.

Perils of Prediction. "Our assessment is that the Egyptian government is stable and is looking for ways to respond to the legitimate needs and interests of the Egyptian people." Hillary Clinton, January 25, 2011. As both we and Secretary Clinton now know, January 25 marks the start of the uprising that swept Egyptian president Hosni Mubarak from power.

A Reason to Smile. Christmas lights