Above the Fold. President Obama has a new White House chief of staff, Bill Daley, and a new director for the National Economic Council, Gene Sperling. (Obligatory Full Disclosure: Gene was a senior fellow at CFR from 2002-2009.) More staff changes will follow as Obama seeks to revamp an underperforming White House operation and recover his political mojo. But fresh faces can only do so much on that score. Yes, Daley and Sperling are smart, talented, and experienced. So were the people they are replacing. More important than who holds what staff position is what lessons the president has learned from his first two years in office and whether he can implement them to good effect. For that we have to wait and see.

CFR Event of the Week. The assassination this week of a friend and political ally of Pakistani President Asif Ali Zardari has heightened fears of Pakistan’s political disintegration. Last September, Pakistani Foreign Minister Makhdoom Shah Mahmood Qureshi spoke at CFR. You can read the transcript of his address, watch the full video, or listen to the audio. In the clip below, Minister Qureshi discusses U.S. policy in Afghanistan and the imperative to reinforce Afghanistan’s civilian institutions.

Read of the Week. Gloom and despair pervade discussions these days about the future of the American economy and American power. As an antidote to the wave of pessimism, read my colleague Adam Segal’s new book, Advantage: How American Innovation Can Overcome the Asian Challenge. Adam argues that the United States has inherent advantages over other major economic powers (read: China and India) when it comes to the innovations that will fuel growth in the coming decades. If Americans understand and nurture their advantages, which include unique partnerships among academia, business, and state and local governments, they will prosper in the new global economy. All the members of the 112th Congress, not to mention state officials and industry leaders, should read Adam’s book. (I’m not the only one who feels that way. Kirkus Reviews called Advantage “a must for policymakers.")

Blog Post of the Week. Christopher Preble and David Rothkopf have posts that constitute informative bookends on the news that Secretary of Defense Robert Gates has directed the Pentagon to cut an additional $78 billion out of its budget over the next five years. Preble sees less-than-meets-the-eye in the announcement, while Rothkopf sees the beginning of a profound shift in the defense budget debate. The true significance of Secretary Gates’s decision lies between these two extremes. But both Preble and Rothkopf understand better than many others that putting the federal budget on a sound footing is going to require major defense budget cuts, and that means rethinking military roles and missions. Both are painful. Watch to see which mainstream politicians decide to be the first to take up the cause.

Poll Question of the Week. A CNN/Opinion Research Corporation poll conducted just before Christmas found that 51 percent of those surveyed thought that the policies being proposed by Republican congressional leaders would move the country in “the wrong direction.”

Chart of the Week. What does the U.S. government’s recent history with deficits look like? It’s not pretty. Washington was in the black during the second half of Bill Clinton’s presidency, but it has been in the red for the last decade—and most spectacularly over the past two years. The green-eye-shades gang predicts that the deficit will decline substantially in the coming years. But that prediction falls in the rosy scenario category. It assumes that the Bush tax cuts expired at the end of last month. Which, of course, they didn’t. 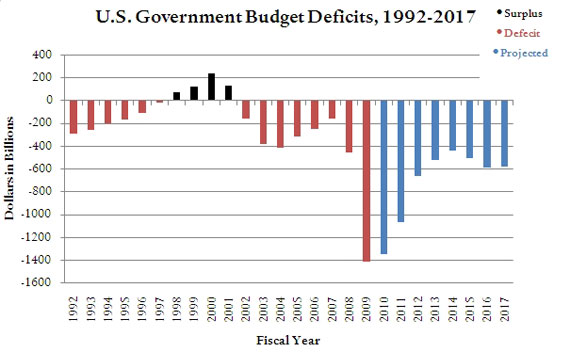 Too Good Not to Note. My colleague, Elliott Abrams, has a new blog, Pressure Points, which discusses events in the Middle East as well as democracy promotion and human rights more broadly. Ian Bremmer and David Gordon (who holds the distinction of being my undergraduate senior thesis adviser among his many other accomplishments) weigh in with their list of the top ten political risks for 2011. Nate Silver reassesses his evaluation of Sarah Palin’s presidential chances. Gideon Rachman adds to the chorus of voices worrying that we are witnessing a fundamental erosion in America’s global position. Matt Latimer assesses the problems the GOP will face between now and 2012.

Perils of Prediction. “God himself could not sink this ship.” The answer a Titanic deckhand gave to a passenger who asked if the ship was unsinkable.

Quote to Ponder. "New Year’s Day: Now is the accepted time to make your regular annual good resolutions. Next week you can begin paving hell with them as usual." Mark Twain.

A Reason to Smile. Bert Blyleven’s election to the Baseball Hall of Fame. What a curve ball.